Dollar and stocks tumble but are trade war concerns justified

Concerns over a trade war have put downward pressure on the stock markets and the US dollar. Wall Street sold off sharply yesterday and shares have opened weaker again today. The dollar has sold off against the yen and the euro, although it is holding its own relatively better against other currencies, most notably the commodity currencies.

Risk is off the menu in response US President Donald Trump’s plans are to impose a 25% tariff on steel imports and 10% tariff on aluminium. Mr Trump is trying to shore up the struggling industries in order to boost the economy and create more jobs. However, his protectionist policies have prompted retaliation from across the world. According to the Financial Times, Cecilia Malmstrom, the EU trade commissioner has said that the bloc will consider imposing its own “safeguard” tariffs on imports of steel and aluminium. Ms Malmstrom said Brussels would wait for the formal announcement of US tariffs before taking any action. Mr Trump plans to formally announce the plans next week. Mexico, Brazil and Canada and have all warned of retaliation too.

As a result of Trump’s unexpected announcement, the dollar has given back a big chunk of its gains made following the hawkish remarks from the new Fed Chair Jerome Powell. The dollar has actually fallen to a fresh multi-month low against the safe haven Japanese yen, which has come to life in recent days amid heightened volatility in the stock markets.

Are the markets overreacting?

Will we really see the start of a trade war? The truth is, the world relies on the US in one way or the other. Retaliation could only hurt the retaliator. So these warnings may not be backed up by action. In fact, there is even the small possibility that Trump may do a U-turn. However, Trump does seem to enjoy global confrontation and with mid-term elections fast approaching, he may press ahead as he aims to protect domestic companies from what he feels unfair trade arrangements.

So, as we head into the weekend, sentiment towards both the stock markets and the dollar are clearly negative. The dollar is doing slightly better against commodity currencies, which tend to be move up and down with risk appetite changes. However, against the euro and in particular, the yen, a safe haven currency, the greenback looks rather weak.

The USD/JPY is actually heading into a significant area of potential support around the 105.00 to 105.30 area. In addition to this being a psychologically-important level, there is also the 127.2% Fibonacci extension level of the upswing from the 2017 low to consider at 105.30. What’s more, the latest breakdown has not been confirmed by the momentum indicator RSI, which is in a state of a positive divergence (making a higher low). Thus, the selling pressure may be waning. However, this is only a warning sign for the sellers, not a bullish signal yet. The bulls would want to see price go back and hold above the recent low at 105.55 if we are to see an imminent trend reversal. Even then, price will still have to break through resistance levels like 106.40, 107.33 and 108.05 before we could be confident of a trend reversal. But if the weakness persists and there’s acceptance below 105.55 then the USD/JPY could head further lower at the start of next week. 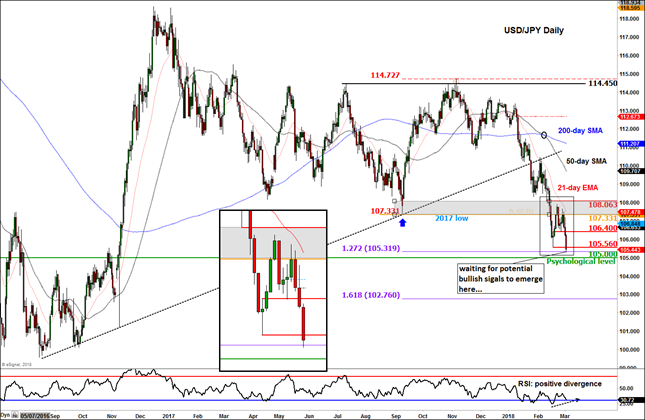