EUR/USD continued to pullback from its recent 1.2500-area highs on Tuesday, further forming a tentative double-top reversal pattern as the US dollar resumed its rebound from 3-year lows. Helping to boost the US dollar this week have been rising inflation expectations that have pushed up US government bond yields to new multi-year highs ahead of next month’s pivotal Federal Reserve policy meeting.

Ahead of that highly anticipated FOMC meeting, this week features several major data releases and rate-related events that will help drive EUR/USD price movement in the short-term, determining whether or not the currency pair will continue its retreat from its double-top highs. Key among these events will be the release of minutes from both the Fed and European Central Bank detailing their most recent monetary policy meetings. These reports will provide important clues as to the central banks’ monetary policy stances, potential interest rate trajectories, and outlooks on inflation and economic growth.

The Fed is up first on Wednesday, when it releases minutes from its FOMC meeting at the end of January, in which interest rates were kept steady as expected. Though new inflation data has emerged since then, any substantive discussion of inflation during that meeting as reflected in the minutes will provide indications as to the Fed’s likely policy trajectory, as well as the potential path of the US dollar.

On Thursday, the ECB releases its own monetary policy meeting accounts. The euro has remained exceptionally buoyant in recent months, especially against a weak US dollar, on a rising eurozone economy and keen anticipation of monetary policy tightening by the ECB. Recently, the central bank hinted that the era of extraordinarily loose monetary policy is essentially over, which lends further support for potentially more hawkishness from policymakers on a global scale.

Aside from the release of minutes by the Fed and ECB, other relevant data releases this week will be focused on the eurozone, including key services and manufacturing data from France, Germany, and the eurozone as a whole on Wednesday, followed by the eurozone consumer price index on Friday.

In the run-up to these data releases, EUR/USD has fallen sharply from last week’s new 3-year high above 1.2500, and is currently trading around its 20-day moving average. Further downside off the noted double-topping pattern is likely if the dollar continues to be boosted by increasing expectations of rising interest rates in the US. The primary downside target in this event is at the key 1.2200 support level. Any sustained breakdown below 1.2200 would confirm the double top reversal, potentially opening the way towards significantly further downside for the currency pair. 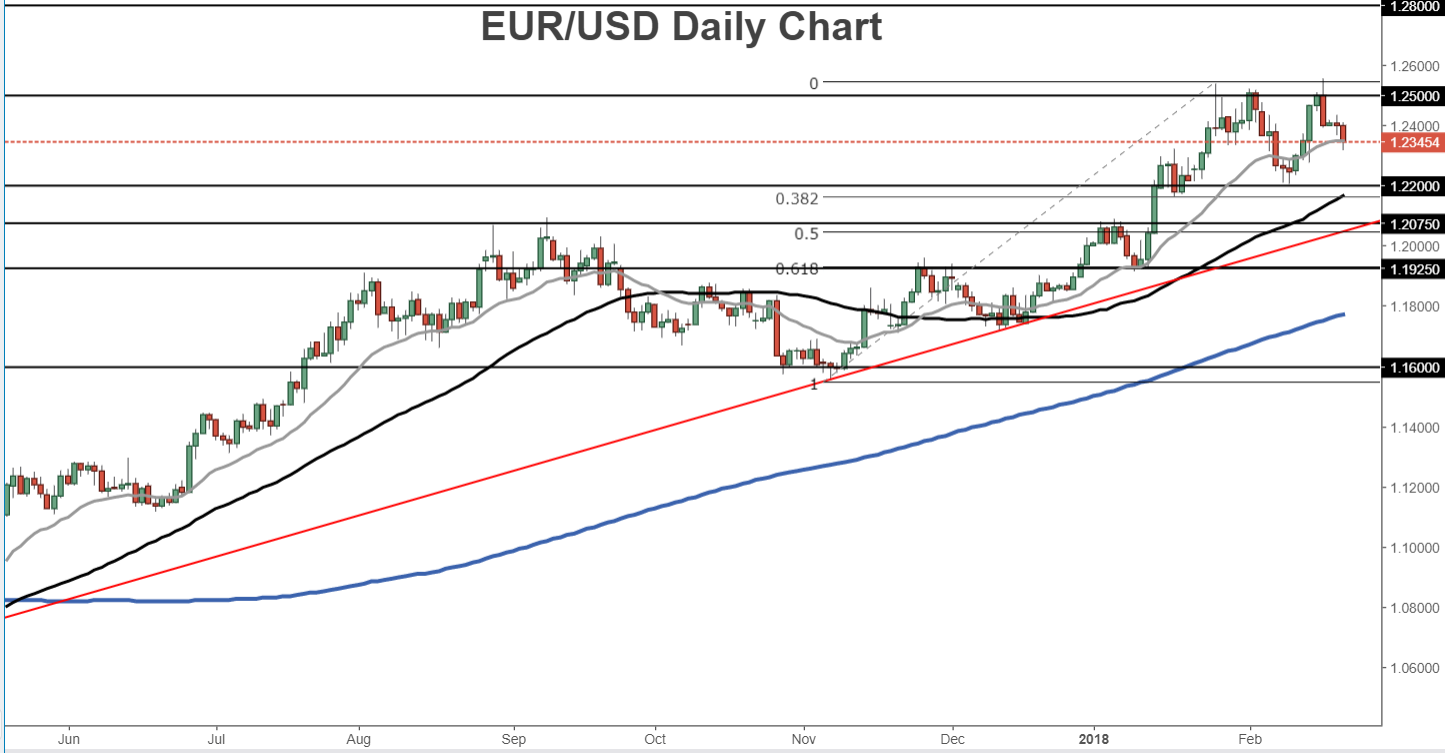