Introduction to the Australian Dollar

The Australian Dollar is the national currency of Australia, known by the abbreviation AUD. Its symbol is the dollar sign ($), which is used domestically, but to distinguish it from other dollar currencies, the Aussie Dollar is usually shown as A$ or AU$.

The Aussie dollar is the fifth-most-traded currency on the forex market – accounting for approximately 6.8% of daily turnover, worth an average value of $445 billion.1 Its popularity is down to the country’s wealth of natural resources, position as a prime trading partner and typically high interest rates.

Ready to trade the Aussie Dollar? Open an account now or learn more about trading forex with us.

Australia is the world’s biggest island but despite its size, the economy isn’t that large – in fact it ranked just 14th in the world by gross domestic product in 2019.2

The Reserve Bank of Australia (RBA) is the country’s central bank, which oversees issuing currency and controlling interest rates. Typically, the RBA has always been an extremely conservative institution; it doesn’t make many interventions in the currency market and has some of the highest interest rates in the world.

The Australian economy is heavily reliant on natural resources, energy and food. The diversity and abundance of commodities in Australia means it has attracted a high level of foreign investment over the years. There are a huge number of reserves for coal, iron, copper, gold, natural gas and renewable energy sources that bring in companies from all over the world – over 8% of the country’s GDP comes from mining. As an export-reliant country, increases in export prices that exceed the cost in import prices will boost the Australian economy.

What moves the price of the Aussie Dollar?

The price of Australia's currency is counter-cyclical – meaning it doesn’t have a correlation with other currencies – and is incredibly volatile. Here’s what moves the Aussie Dollar’s price:

A brief history of the Australian Dollar

The Australian Dollar was introduced in February 1966 and has been through nearly every stage of currency evolution possible: a peg to gold, a peg to sterling, a peg to the US dollar, a peg to a basket of currencies and a moving peg. All these fixed solutions to valuing the Aussie dollar were unsuccessful, and the economy was extremely unstable.

In 1983, the Australian Dollar finally became a free-floating currency, when the government – led by Bob Hawke – decided to abolish restrictions on the international movement of capital. The decision was a crucial part of opening Australia’s economy.

At the time of its floatation, most investment in Australian markets were small domestic banks and companies. But once the AUD was free floating, foreign banks entered the market and boosted the Aussie Dollar to the actively traded currency we see today.

AUD/USD is the forex ticker for the exchange rate between the Australian Dollar and US Dollar – the pair is also known as the Aussie. It tells traders how many US$ are needed to buy one AU$ in real time.

The Aussie is the sixth-most-traded currency pair in the world – representing approximately 5% of all forex trades by volume. Thanks to its popularity, AUD/USD is reasonably volatile, which creates a range of opportunities for traders.

Trade volumes for AUD/USD increased following the Australian commodity boom in 2000. As the US became a much more involved trade partner, the relationship between the two countries increased interest in the exchange rate of their currencies. Many traders also use the AUD/USD pair as a benchmark for the relationship that the USD has with commodities and the Asian market as a whole.

AUD/JPY is the forex ticker representing the Australian Dollar against the Japanese Yen. It’s an extremely popular pairing for its relation to risk – it tends to fall in price when risk is perceived to be low and rise when risk is higher and market participants are looking for risk-off investments.

Australia and Japan have an extremely close trade relationship. Japan is the second largest importer of Australian shipments, worth approximately $19 billion in 2020 – totalling 9% of Australia’s exports. As with most AUD pairings, AUD/JPY is highly correlated with commodity price changes as Japan relies on Australia so much for natural resources.

The AUD/JPY pair is extremely susceptible to changes in the US economy due to the strong relationship between the Japanese Yen and US Dollar.

GBP/AUD is the currency pair for British Pound Sterling against the Australian Dollar. It tells traders how many AU$ are needed to buy one unit of sterling.

While Britain and Australia are always seen as somewhat connected – due to the Commonwealth – the two economies are extremely different. Sterling is a much bigger currency than the Aussie Dollar, and much more widely traded, which means GBP is more susceptible to speculation.

When trading GBP/AUD, it’s important to be aware that interest rates play a huge role in the exchange rate. This is largely because the 2008 financial crisis led to years of low interest rates for the UK, while Australia was relatively unaffected. So, GBP/AUD is a popular carry trade, which can cause volatility in the parings price.

You can trade the Australian Dollar 24 hours a day, five days a week – from 10pm (UTC) on Sunday evening to 10pm (UTC) on Friday night.

The best time of day to trade the Aussie Dollar will depend on which pairing you decide to focus on. As a rule, each pair will see the most movement when its sessions overlap. For example, the AUD/GBP pair would be more highly traded when both the Tokyo and London forex sessions overlap. 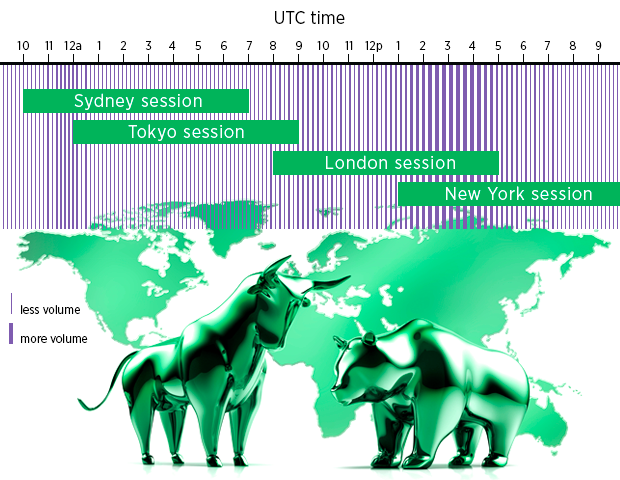 You can trade the Australian Dollar against other major currencies such as the US Dollar, Euro, British Pound and Japanese Yen, as well as 80+ other pairs, via CFDs. Take your position on whether forex prices will rise or fall in the future, without having to buy the underlying asset.