The OPEC+ meets again on Thursday and once again it is expected to confirm a previously agreed output hike of 430,000 barrels per day in June.

The OPEC and its allies (OPEC+) are continuing to slowly relax the output cuts they introduced in 2020 when demand collapsed as major economies went into lockdowns to curb the spread of Covid. The group is set to increase output targets by 432K bpd every month until the end of September. At that point, the remaining production cuts should be fully unwound.

But demand has recovered strongly from the lows of 2020 and oil prices have gushed higher, before surging again on the back of Russia’s invasion of Ukraine. Against this backdrop, you would think the OPEC+ would be keen to add oil more quickly than they have been doing so. Yet, they have continually refused to do that, while many members have been unable to ramp up their production to levels called for under the supply deal.

This begs the question: What is the point of ratifying another increase in production month after month, if the alliance is not able to reach it? Why are they still going at it?

The short answer is that the OPEC does not want to send the wrong signal. It has already come under a lot of scrutiny by not being able or willing to raise its output more than it has done so far. If it were to set the productions targets even lower, this would give some members more excuse not to hit the production target, and thus keep the market undersupplied. Even if the OPEC+ collectively wanted to raise output even more slowly, it would not look good on their part. Yes, you have a slowing Chinese economy, but this is to be offset by falling Russian oil exports as Western nations attempt to phase out their dependence on Russian energy.

On Wednesday, the EU announced a phased embargo on Russian oil. The plan, which needs to be ratified by all 27 EU member states, will see Russian supply of crude oil phased out within six months and crude products by the end of the year. If it manages to convince its members to ratify the plan and prevent Hungary and Slovakia to buy more oil than they need, then this will have a huge impact on Russian oil exports.

At some point, the OPEC will need to address over-compliance. According to a Reuters survey, OPEC’s April oil production rose only by 40K bpd from March. As a result, OPEC compliance with pledged cuts was 164%, compared to 151% in March. With the exception of February, the OPEC has consistently undershot the pledged hikes since October.

The problem is that many producers lack the capacity to pump more crude. This is because of insufficient investment, which was exacerbated by the pandemic. Among the OPEC members, Libya and Nigeria have struggled to raise their production the most. In the case of the former, it was losing more than 550,000 bpd from blockades on fields and terminals at one point in April. Libya is among the exempt members from making output cuts. Although Saudi Arabia and to a lesser degree Iraq have moved to offset the production short falls, this has not been near enough to meet the group’s target.

As any investment in the industry will take time to help increase supply, it looks very unlikely that the OPEC will address the overcompliance issues at this meeting. It will also point to the situation in China as a reason to remain cautious. As a result, we expect the OPEC to stick to a deal reached last July and hike output by another 432K bpd.

What does it all mean for oil prices?

In short, we are more likely to see elevated levels of Brent and WTI prices than lower, especially given the difficultly the OPEC has had in raising its oil output of late. In other words, the market is likely to remain tight for a while yet. Oil prices will thus remain supported on the dips, hurting consumer incomes and underpinning inflationary pressures. The only caveat to that view is that if China ramps up its lockdowns due to its zero Covid policy and the recent spread of the virus there. Indeed, the OPEC+ will be keen to highlight this risk as it explains why it is not opting for higher output quotas than planned.

Brent may have formed a base around $100.00 after spending several weeks in consolidation above this psychologically important level. If it manages to hold the breakout above the trend line shown on the 4-hour chart, then prices may find a new range between $110 to $120 per barrel, especially in light of the Russian oil export ban and OPEC’s ongoing policy stance. 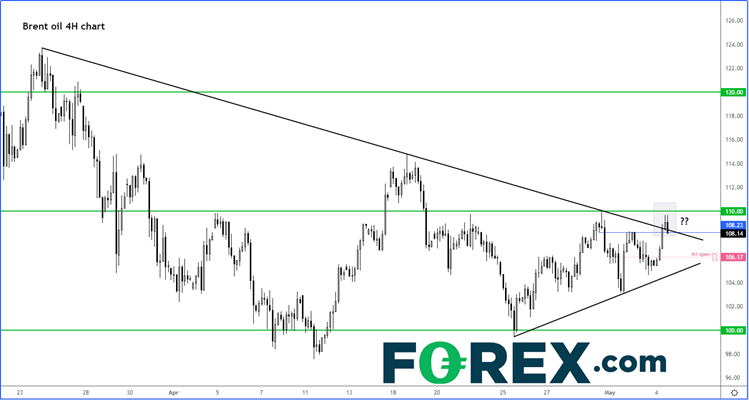