A guide to bitcoin halving and its impact on market prices

What is bitcoin halving?

Bitcoin halving is an event that cuts bitcoin’s mining rewards in half and also halves the rate at which new coins enter circulation. Due to the way bitcoin works, a halving has a significant influence over the cryptocurrency’s supply and therefore the market price.

To explain why bitcoin halves, we first need to understand how the bitcoin network runs.

Bitcoin’s creator – pseudonymously known as Satoshi Nakamoto – set a limit on the number of bitcoin that could ever be produced at 21 million coins. So, like gold and silver, supply is finite which has contributed to the cryptocurrency’s high valuation.

The creation of new bitcoin – and cryptocurrencies in general – works through a process called mining. Individuals, known as miners, dedicate hardware to solving cryptographic equations in order to verify a single transaction. Once authenticated, these transactions are added as blocks to the blockchain and the miner is then rewarded with a certain number of bitcoin, which are added to the overall supply of BTC in the market.

The reward each miner gets for successfully authenticating a transaction is set. When bitcoin was first launched, each miner could earn 50 coins for each block that was processed. This would’ve been worth less than a dollar, but by today’s rates, you’d be looking at hundreds of thousands worth of BTC. But, as there is a set limit on bitcoin’s supply, there’s also a limit on how long each reward remained in place, and every four years the reward declines by 50%, in what’s become known as a halving event.

The original 50 BTC reward was only set for the first 210,000 blocks that were mined as by this point, over half the supply of bitcoin would exist. So, when the first halving came to take place, the reward was reduced 25, four years later it was reduced to 12.5 and so on.

In theory, the limit of 21 million coins will be hit by the year 2140, at which point the reward for mining will no longer exist. After that, miners will likely generate commissions for transactions – similar to the fees that banks charge on traditional transactions.

Learn what bitcoin trading is

When was the last bitcoin halving?

The last bitcoin halving was in 2020, at which time the reward for mining a block was reduced to 6.25 BTC. Bitcoin’s blockchain had reached 630,000 blocks, and the number of blocks produced daily was halved to 900.

When is the next bitcoin halving?

The next bitcoin halving is due to take place in Spring 2024 and will see the reward for miners decline to 3.125 BTC. At this point, bitcoin’s blockchain will have reached 840,000 blocks in total, and the daily supply of new BTC will drop to 450.

What is a bitcoin halving’s effect on price?

Bitcoin halving events have historically caused the market price to increase both before and after an event. This is because the supply of bitcoin is finite – with 18.7 million out of 21 million bitcoin currently in circulation. So, at each halving event, traders know that only half the previous number of bitcoin will be released per transaction, and this scarcity makes each BTC more valuable.

As mining is such an expensive process – requiring ever-increasing computer processing power – it means that the decreasing block reward makes it less and less appealing to contribute to the blockchain. Blocks are created every 10 minutes, but this will only continue as long as the miners are willing to process transactions to earn transaction fees and block rewards. So, the only way for miners to continue performing tasks is for the price of bitcoin to increase.

The effect bitcoin halving has on the market price was previously known as a ‘halving cycle’, as it was thought to come in three main phases. First, a long bull run in the lead up to the halving, then the price would increase immediately following the event, and finally, after enough time had passed, a market crash.

However, as the supply drops have become smaller and smaller with each halving event, they’ve had less dramatic impacts on the market price. The growth in bitcoin’s price is now predominantly driven by growing demand, rather than falling supply.

Let’s explore the most recent ‘halving cycle’ in 2020 as our case study.

What happens before a bitcoin halving?

Before a bitcoin halving, there’s typically a long bull run that pushes the price of each BTC up. If we look at the market 100 days before the May 11 2020 halving, this would put us at the start of February when BTC was trading at approximately $7715.8 each. During this period, the price of bitcoin dipped to a low of $3113 caused by the coronavirus market crash and then increased up to $6978 in the build-up to the halving. 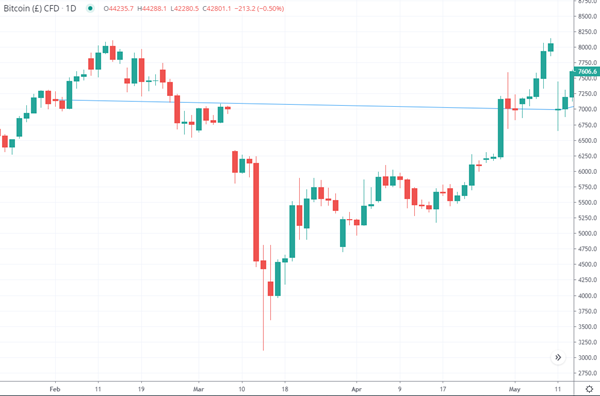 What will happen in a bitcoin halving?

On the day of the bitcoin halving in 2020, the price of BTC fell from about $7026 at midnight to $6999 24 hours later. This halving didn’t cause an immediate price increase because the growth had begun so much earlier, combined with the negative impact that the coronavirus had on the market.

What happens to bitcoin after halving? 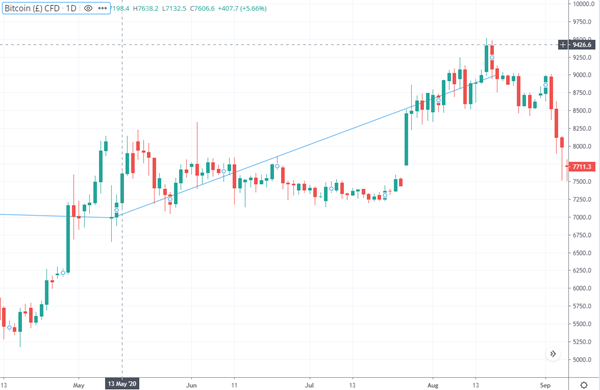 After previous halvings, the price of bitcoin fell after a while. Most speculators agree that this pattern was caused by traders taking their profits from the move higher and the decline in media coverage of the event. However, the market crash didn’t ever happen after the 2020 bitcoin halving. As we’ve mentioned, this is because other factors were influencing the demand for bitcoin and so the price continued to rise. By April 2021, nearly a year after the halving, bitcoin’s price had hit over $46,000 and by November 2021 it had hit a new high of over $50,000.

Here are the past and all the known future bitcoin halving dates (years) with the corresponding final BTC reward.

In theory, there will only ever be 32 Bitcoin halving events. Once the final halving is completed, there will be no new bitcoin created, as its maximum supply of 21 million will have been reached.

How to trade a bitcoin halving

To start trading bitcoin with us, follow these steps:

Alternatively, you can learn more about our bitcoin offering or practise trading in a risk-free demo account.

How often is bitcoin halved?

Bitcoin is halved every four years; the event reduces the total number of BTC created every day by half and also reduces the reward for miners. A bitcoin halving event can have a significant impact on BTC’s price.

Yes, ultimately if you own bitcoin then a halving is good for your holding. As the amount of bitcoin that can be mined with each block decreases, it means that there’s less supply available, which ultimately makes each bitcoin more valuable.

Learn how to trade BTC.

It’s worth noting though that the mining incentive also decreases, so eventually the only reason that people would continue mining is if they were paid an alternative fee.

Does Ethereum halve in the same way as bitcoin?

No, Ethereum doesn’t have a halving like bitcoin does. Additional ether are released during the mining process in the same way as BTC, but there is a constant 5 eth per block reward. As ether has no cap on supply, this doesn’t have to be reduced via a halving event.