We believe the odds are tilted toward a near-consensus reading in overall job growth...

Every month, we remind traders that the Non-Farm Payrolls report is significant because of how it impacts monetary policy. In other words, the Federal Reserve is the “transmission mechanism” between US economic reports and market prices, so any discussion about NFP should start with a look at the state of the US central bank.

Even though we’ve flipped the calendar to a new year (and decade), the Fed remains in the same decidedly neutral posture, with little chance of tweaking interest rates in either direction until at least the second quarter, if not until after November’s election! Accordingly, even an outlier NFP reading for a single month is unlikely to meaningfully impact Fed policy, and by extension, market pricing. That said, the jobs report remains one of the best measures of the health of the labor market and provides insight into overall activity in the world’s largest economy, so it’s still likely to provide some short-term trading opportunities.

From our perspective, there have been four historically-reliable leading indicators for the NFP report:

In other words, the leading indicators are fairly mixed this month, with two deteriorating, one effectively holding steady and one improving. In addition, this month’s report won’t benefit from nearly 50,000 United Auto Workers employees returning from strikes to General Motors factories. Weighing these factors, we believe the odds are tilted toward a near-consensus reading in overall job growth, with internal models pointing toward headline job creation in the 140-200k range. 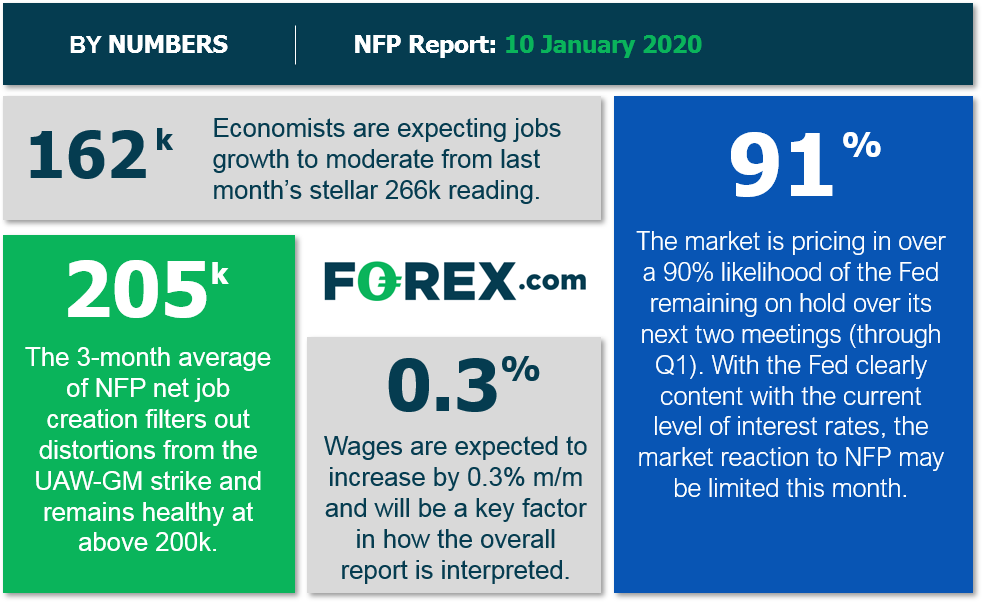 See wage and job growth scenarios, along with the potential bias for the US dollar below:

In the event the jobs and the wage data beat expectations, then we would favor looking for short-term bearish trades in EUR/USD, which remains in a longer-term bearish channel after testing resistance last week. But if the jobs data misses expectations, then we would favor looking for bullish trades in NZD/USD, which has formed a clear uptrend over the past few months and has recently pulled back from overbought territory.