What’s next for the highly correlated assets of Gold and DXY?

As long as this correlation holds, traders can get clues as to where Gold may be headed based on the direction of the DXY.

For much of the year, Gold (XAU/USD) has been inversely correlated with the US Dollar, in particular, the US Dollar Index (DXY).  That is to say that when the DXY moves higher, Gold tends to move lower.  The reverse has also been true.  When the DXY moves lower, Gold tends to move higher.  The correlation between the 2 assets has never been more pronounced this year than it has over the last few weeks. Since November 10th, the correlation coefficient has been below -0.80.  A reading below that level indicates a strong negative correlation. Therefore, as long as this correlation remains below -0.80, when the DXY moves in one direction, Gold should move in the opposite direction. 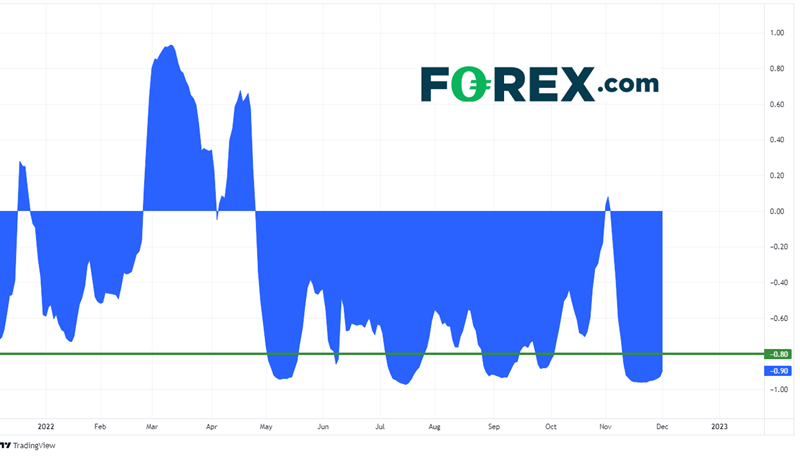 The DXY made a high on September 28th at 114.78 as the index posted a false breakout above the upward sloping channel the pair had been in since March.  The RSI was in overbought territory, near 80, which was a signal that the US Dollar Index may pull back.  The DXY did pull back but it wasn’t until November 4th, after the stronger NFP, that the floor fell out.  On November 10th, the day the lower than expected CPI was released, the DXY dropped a significant amount again. The index broke below a downward sloping trendline near 109.25 and continued to move lower.  After Powell’s dovish speech regarding the slower pace of interest rate hikes on November 30th, the DXY broke even lower through the 200 Day Moving Average, trendline support, and is testing horizontal support and the 50% retracement from the lows of January 14th to the highs of September 28th, near 104.70.  If price continues to move lower, the next horizontal support level is at 104.65, then an upward sloping trendline near 103.  Below there, the 61.8% Fibonacci retracement level from the previously mentioned timeframe is at 102.36. 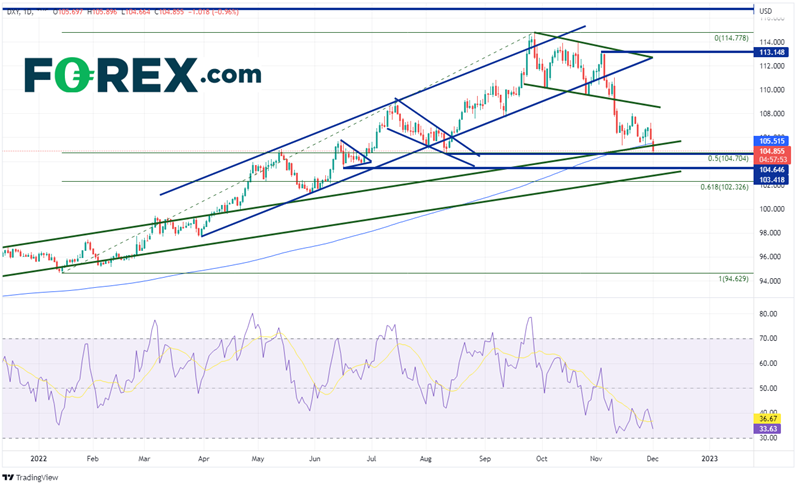 XAU/USD made a low on September 28th at 1614.95.  The precious metal then moved slideways between 1615 and 1731 until November 3rd, testing the previous lows on several occasions. Notice that when Gold made its Year-to-Date low, the RSI was on oversold territory.  On November 4th after the stronger than expected NFP, that Gold moved aggressively higher. On November 10th, the day the lower than expected CPI was released, Gold moved much higher again.  XAU/USD moved to the 38.2% Fibonacci retracement level from the highs of March 8th to the lows of September 28th, near 1789, and was halted.  However, after Powell’s dovish speech regarding the slower pace of interest rate hikes on November 30th, Gold began moving higher once again.  On December 1st, Gold broke above the recently mentioned 38.2% Fibonacci retracement level and the 200 Day Moving Average.  It then ran into horizontal resistance from the highs of August 10th near 1807.91.  If Gold continues to move higher, the next resistance is at the 50% retracement from the recently mentioned timeframe at 1842.71 then the highs of June 13th at 1879.16.  Above there, the next resistance is at the 61.8% Fibonacci retracement level at 1896.46. 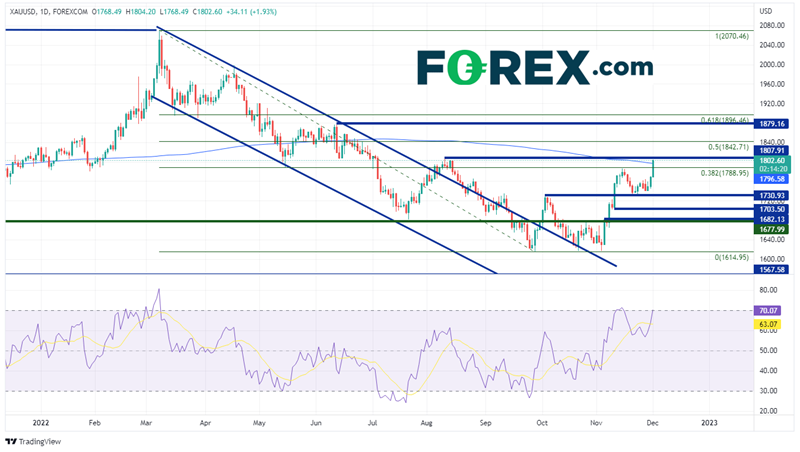