In this week’s edition, we are getting technical on the Nasdaq, WTI, gold and USD/CNH. So, there’s something for everyone.

European markets bounced back this morning, and this helped to push US index futures higher. But while the markets may be due for an oversold rebound – especially after falling for 5 consecutive days – I just don’t think there is any fundamental or technical justification for a market bottom yet.

For that to happen either stock prices will have to get even cheaper to tempt the dip buyers back into the market, or something has to change fundamentally. Right now, central banks around the world are continuing to tighten their monetary policies aggressively, except the likes of the BoJ, PBOC and CBRT. Meanwhile concerns about the health of the global economy continues to rise as high levels of inflation eat into consumers’ disposable incomes and raise costs for businesses. What’s more, you have several emerging market currencies imploding, while currencies of some of the top economies are hitting either multi-decade lows or in the case of the British pound, new all-time lows. The slumping FX market is only going to exacerbate the inflationary problems in those nations and hurt demand for US exports.

Against this backdrop, the Nasdaq is likely to remain under pressure. The tech-heavy index fell below last year’s low and after several attempts to climb back above it, it looks like the market has finally accepted to hold below it. This in in itself is bearish. But with the index making lower lows and lower highs, you have indicators such as the long-term 200-day simple moving average and the short-term 21-day exponential moving average point lower, both objectively telling us that the trend is indeed bearish.

Last week saw the Nasdaq close lower for the second consecutive week, as it broke below support around 11450, which is now being tested as resistance. If the index holds below this level on a closing basis, then the short-term path of least resistance would remain to the downside and as such we might see a new low below the June low of 11036 next. Otherwise, a small recovery could be the outcome before we are potentially hit with the next wave of selling. 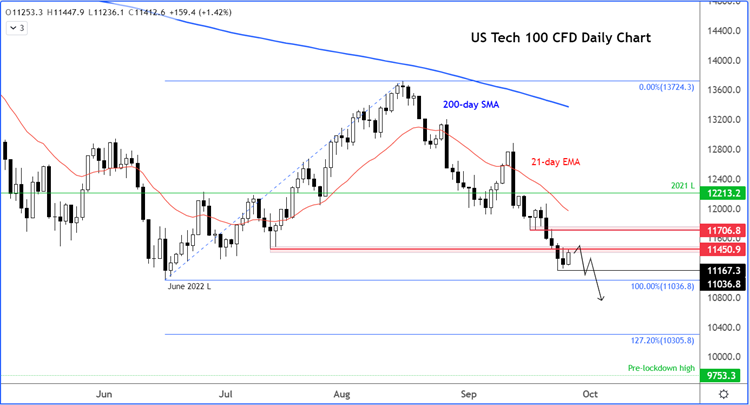 Along with everything else crude oil has stabilised somewhat after a sharp two-day sell-off that saw prices tumble to fresh 9-month lows.

There’s some hope that the expected supply cuts from OPEC+ to be announced at their October 5 meeting is going to shore up prices. Traders are also not going all guns blazing in shorting oil because of the ongoing conflict in Ukraine. But overall, oil remains a sellers’ market with worries about a global recession and high interest rates intensifying. In addition, with currencies of major oil importing nations tumbling, anything traded in US dollars will cost more... such as oil.

So, it is possible that crude oil may be unable to hold onto its gains and turn lower again as investor worries about the demand outlook intensifies.

At the time of writing, the WTI contract was testing resistance around $78.00, the low from Friday. Given the strengthening bearish trend, we may see oil prices turn lower from here and head towards the $75 handle next. But if the bulls manage to defend their ground here, then a stronger recovery towards $81-$82 area may be the outcome, possibly ahead of more losses. 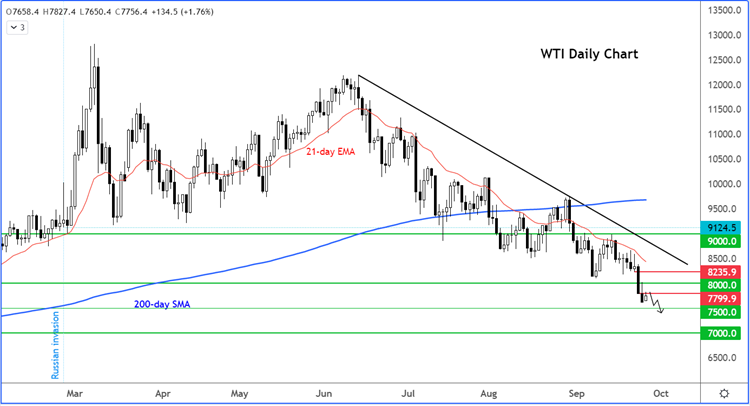 Gold found some mild support on the back of a slightly weaker bond yields and US dollar this morning, as downbeat foreign currencies were helped along by mild short-side profit-taking amid no fresh news, after coming under heavy pressure in recent days.

But gold, like many other assets, have not shown any major technical signs of a reversal. As such, watch for renewed selling pressure around resistance levels. At the time of writing, gold was testing potential resistance around $1639/40 area – the low from Friday. Once support, this level may turn into resistance, leading to new wave of selling towards the $1600 handle. 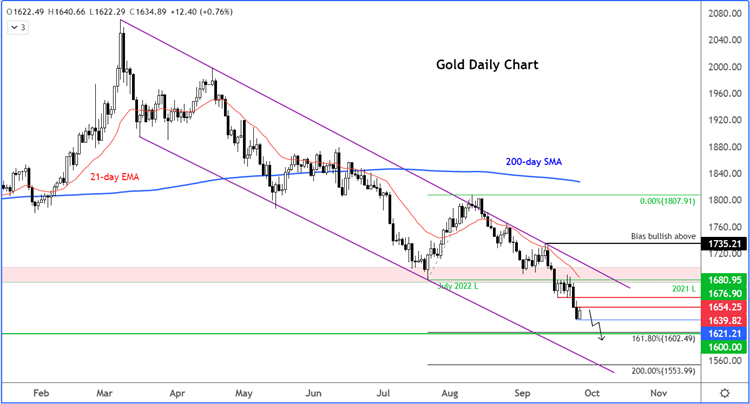 The path of least resistance for gold will remain to the downside until it makes a key reversal pattern or form a higher high.

Despite high inflation, investors are disliking gold right now for two reasons. First, with major central banks around the world tightening their policies, this has helped to send bond yields to multi-year highs. Yield-seeking investors have been better off to hold government bonds to get some guaranteed return rather than holding zero-yielding assets like gold. Second, the strengthening US dollar has weighed heavily on nearly all major buck-denominated assets, including gold. Would-be buyers earning in foreign currencies are having to pay more, and so they are being discouraged to invest in gold.

There’s also another risk for stocks and other risk-sensitive assets that is brewing and is something not being discussed much in the markets right now: a full-blown emerging market (EM) currency crisis. They are falling one after another. Turkish lira, Indian and Pakistan’s rupees, Chinese yuan, you name it. With all these currencies tumbling, so does the purchasing powers from those nations.

Watch out for the USD/CNH as the yuan continues to weaken. This pair is approaching the old highs around 7.1964, the double top high from 2019 and 2020. I imagine lots of buy stop orders would be resting above those equal highs, which will likely be triggered very soon given the way price is shaping up, with lots of momentum behind it. 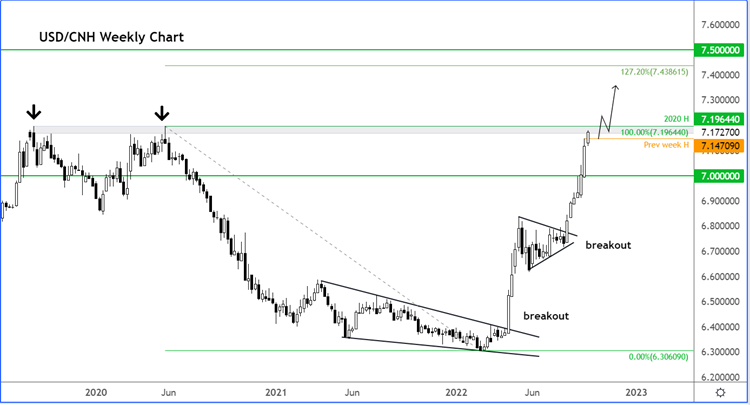