Sentiment remains supported above all by ongoing optimism that the US and China will agree to a phase one trade deal soon.

European stocks surged higher this morning, led by the UK’s FTSE with a gain of 1.2% followed by the German DAX index which tacked on 0.9%. The region’s other indices were higher too, following a mixed session in Asia and after shares on Wall Street managed to relinquish most of their earlier losses yesterday to close slightly higher. US index futures pointed to new record highs for the S&P and Nasdaq. The risk-on tone is also evident is FX with the risk-sensitive New Zealand dollar being the strongest and safe-haven Swiss franc the weakest at the time of writing.

Sentiment remains supported above all by ongoing optimism that the US and China will agree to a phase one trade deal soon. Investors welcomed a report that said the US would extend a license to allow American companies to do business with Chinese tech firm Huawei. News that the US President Donald Trump “protested” to the Fed’s Jay Powell that he should consider lowering interest rates in par with other developed countries was also greeted with cheer. The dollar fell sharply yesterday, and the buck was struggling again at the time of writing, especially against commodity dollars and the euro. 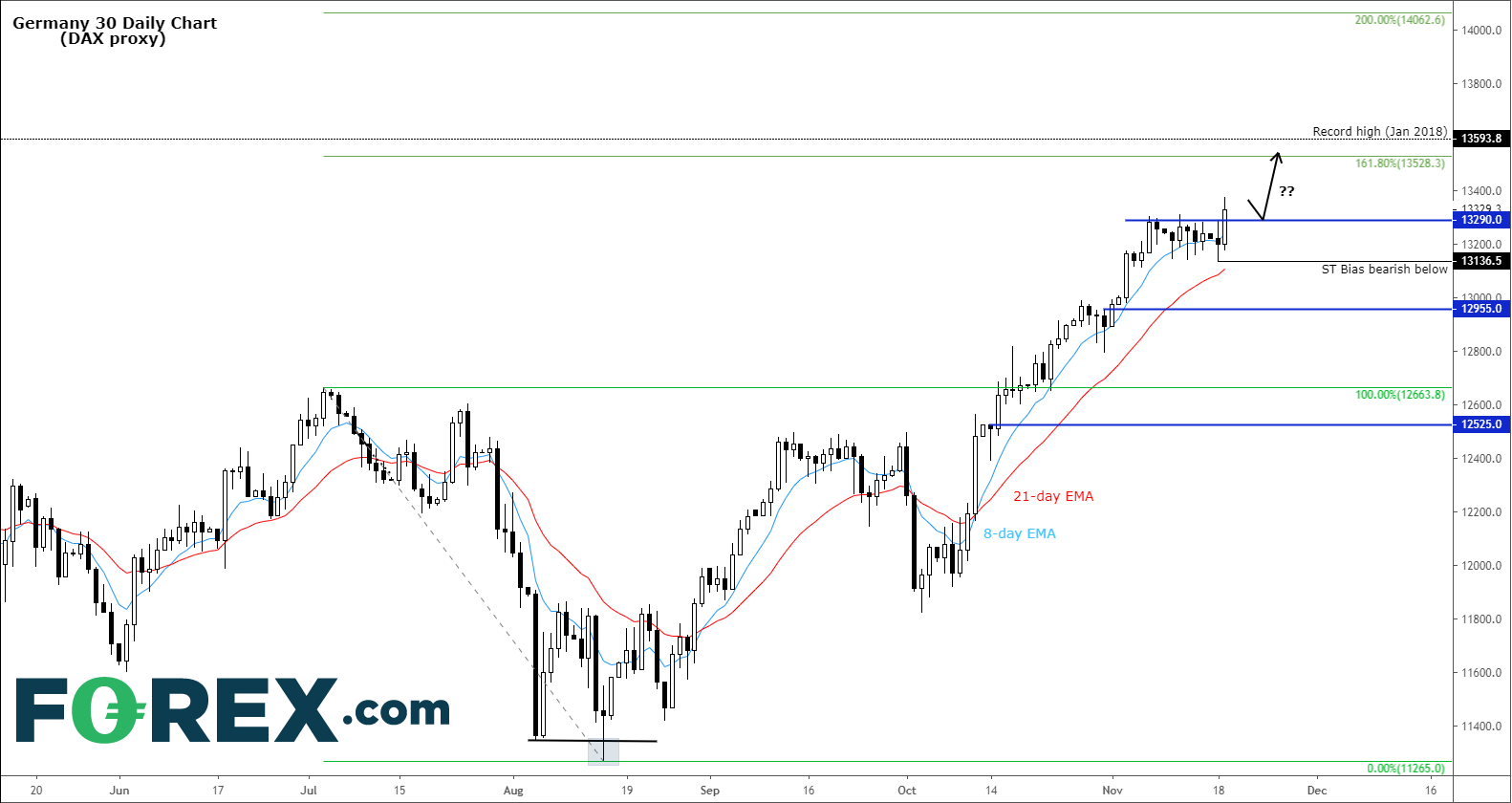 The DAX, which had been consolidating its gains over the past 7 or 8 trading days holding near its highs, broke to a new multi-month high this morning. The recent consolidation allowed short-term oscillators to work off their severely “overbought” conditions through time rather than price action, which is bullish. With sentiment remaining positive, the index continues to hold in the sweet spot above the still-rising 21-day exponential moving average (EMA).

When short-term EMAs are rising, this is usually a sign of a strong bullish trend. Right now, even the very short-term 8-day EMA is sitting above the 21-day EMA and both are rising. They are objectively telling us that the trend is bullish and will remain that way until and unless we see a reversal stick and a breakdown in the daily time frame.

With the 8 and 21 EMAs pointing higher, we are continuing to expect shallow retracements until the bullish trend ends. As such, a pullback to the top of old resistance range around 13290/13300 could be defended, leading to another push higher.

The next bullish objectives for the DAX bulls are at 13528, the 161.8% Fibonacci extension level of the downswing from July to August, followed by 13594, the previous record high hit in January 2018.

However, if the index turns lower and takes out the base of the recent consolidation range and Monday’s low at 13136, then in that case the bullish bias would become invalidated in the short-term outlook. In this potential scenario, we could see a deeper pullback over the coming days. But the bears must see this breakdown first before stepping in, as the trend is currently objectively bullish.