According to recent “sources”, OPEC+ is likely to leave production unchanged when it meets virtually on December 4th.

OPEC+ meets on Sunday, December 4th to decide whether it should increase or decrease oil production.  It could also leave the current level of output unchanged.  The meeting was supposed to be held in Vienna; however, it will now be held as a virtual meeting.  Last week, it was rumored that Saudi Arabia said the group was going to increase output by 500,000bpd.  The price of WTI Crude Oil fell four dollars on the rumor. However, it was later denied, and Crude Oil quickly pared its losses.

As the meeting gets closer though, “sources” say that OPEC+ will leave output unchanged.  This comes after OPEC+ surprised markets in October by cutting production by 2,000,000bpd.  Uncertainties in China are contributing to the likelihood that OPEC+ will leave production unchanged as the country tries to re-establish its manufacturing sector.  Lockdowns and restrictions in China have led to fears of a lack of demand, which would push the price lower.  However, over the last few days, China has announced several new measures to help ease Covid restrictions, including in the manufacturing city of Zhengzhou.  Stores and cinemas are set to reopen, as well as taxi service and subways.  On the other hand, on Wednesday, China released its NBS Manufacturing PMI for November.  This print was 48 vs an expectation of 49 and a previous reading of 49.2.  This is the lowest print since April.  Slower manufacturing and uncertainties around Covid in China add to reasons the Committee may let the dust settle before adjusting output.

In addition, there is the matter of the EU price cap, which is expected to be decided on December 5th (the day after the OPEC+ meeting).  The EU cap is still up for discussion, as some countries wish to punish Russia more than others for the invasion of Ukraine.  Estimates are that the cap will be between $60 and $70.  However, OPEC+ may wish to wait to see what the impact will be on Russian oil from the upcoming price cap before adjusting supply.

If OPEC+ leaves output unchanged, prices will increase if demand increases.  If prices continue to trade higher, resistance is at the lows from October 17th at 82.10.  Above there, price may struggle between previous highs and the 38.2% Fibonacci retracement level from the highs of June 14th to the lows of November 28th between 92.74 and 93.62.   The next level of resistance is the 50% retracement from the same timeframe at 98.64.  If demand is set to decrease as markets price-in the possibility of a global recession, prices should fall.  First support is at the highs from late December 2021 at 73.30, then previous lows at 66.15 and 62.46. 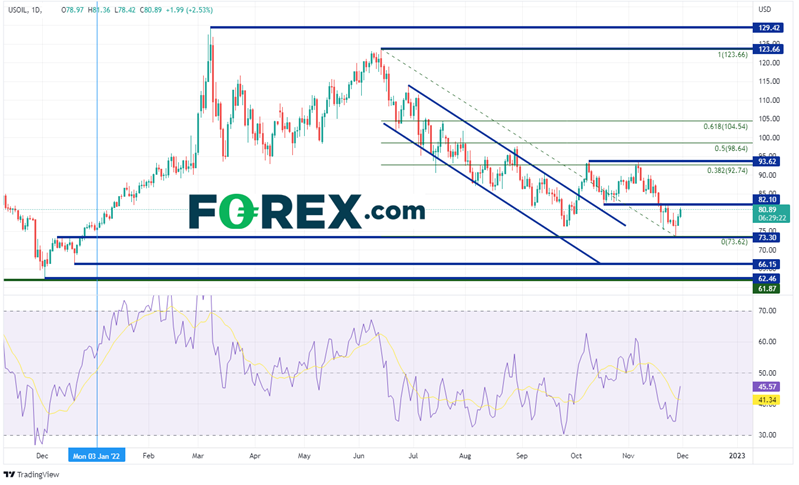 According to recent “sources”, OPEC+ is likely to leave production unchanged when it meets virtually on December 4th.  With uncertainties surrounding China’s Covid measures and its manufacturing industry, OPEC+ is likely in “wait and see” mode as the situation plays out.  Add to that the uncertainty of how an EU price cap will affect the market, and the group is likely to remain on hold.