The Bank has signaled they are ready to raise interest rates to 0%.

On Thursday, Sweden’s Central Bank,  Sveriges Riksbank (more commonly known as simply Riksbank) is set to hold their next Interest Rate Decision meeting.  On October 24th, the Bank left interest rates unchanged at -0.25%, where it has been since late 2018.  Despite the Riksbank noting that there is still uncertainty surrounding international economic activity and inflation, the Bank has signaled they are ready to raise interest rates to 0% on Thursday.

On a daily timeframe, USD/SEK has been in an upward sloping wedge since mid 2017.  The target for a broken rising wedge is a 100% retracement of the wedge, which would be near 8.00! 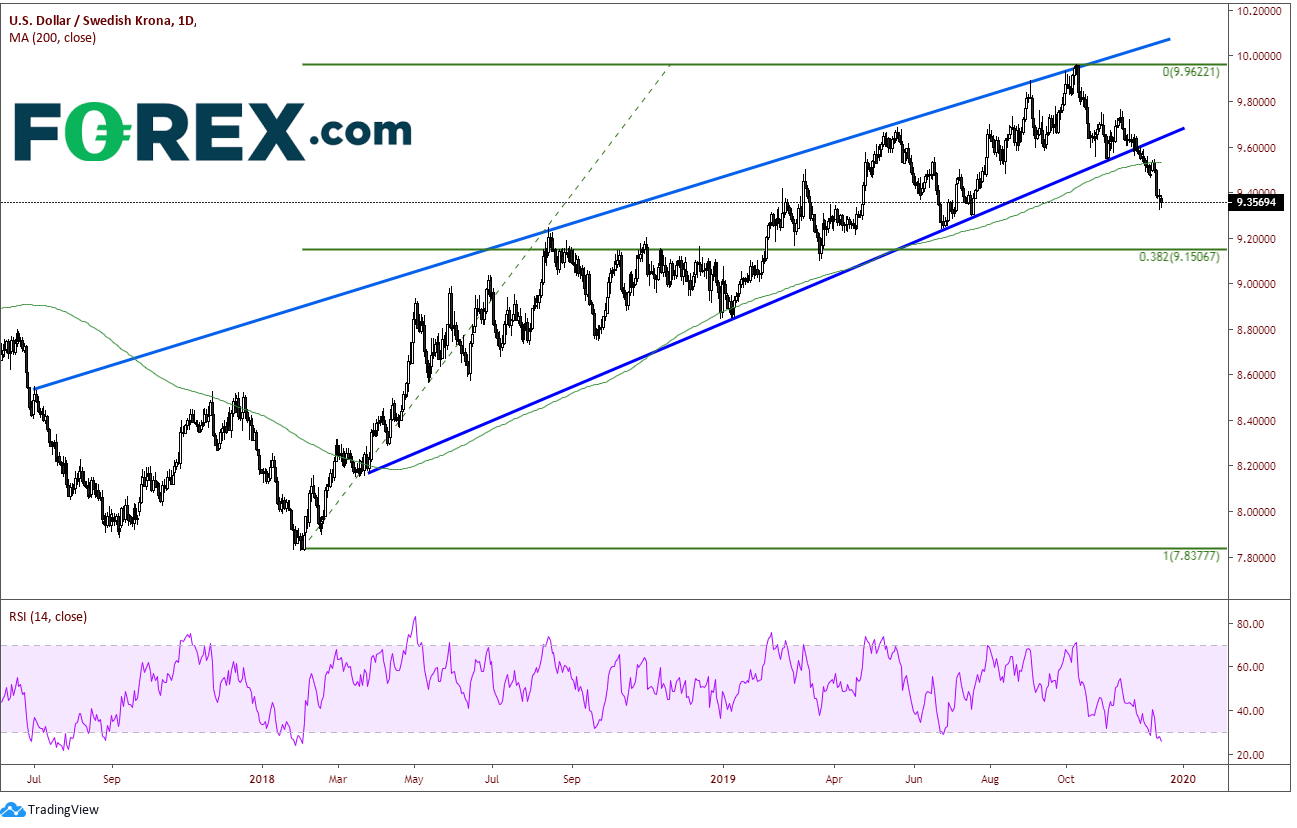 On October 9th of this year, price put in a high of 9.9644 near the upper trendline of the wedge.  The market began trading lower back into the wedge, bounced off the bottom trendline on November 4th, and putting a shooting star candlestick formation on November 13th.  As USD/SEK began to price in an interest rate increase, USD/SEK began moving lower and broke down, out of the rising wedge.  Price hasn’t looked back since, as it also broke lower below the 200 Day Moving Average near 9.5500 and down to current levels near 9.3675.  The RSI is currently in oversold conditions; however, it is not diverging with price yet, meaning the RSI could still move lower (along with price). 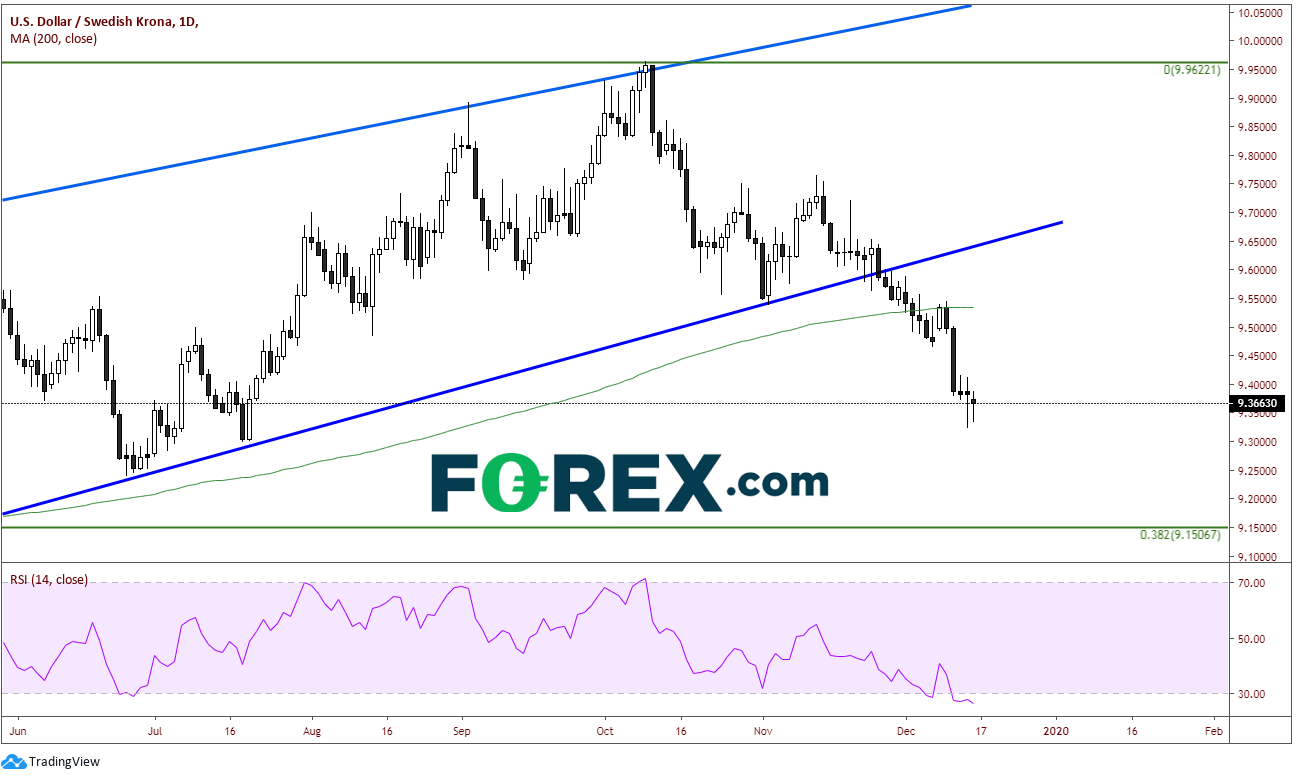 On a 240-minute timeframe, price is putting in a rounding top (some may call it a head and shoulders formation) and broke a downward sloping trendline earlier this month.  The RSI is currently not oversold, and there may be room for a continued move down to support near 9.2375. Below that, support comes across at the 38.2% retracement from the low of January 31st, 2018 to the highs on October 9th of this year at 9.1507.   First resistance is near the broken trendline and the 200 Day Moving average around 9.5000/9.5300.  Above that, resistance is at the broken ascending trendline near 9.6500. 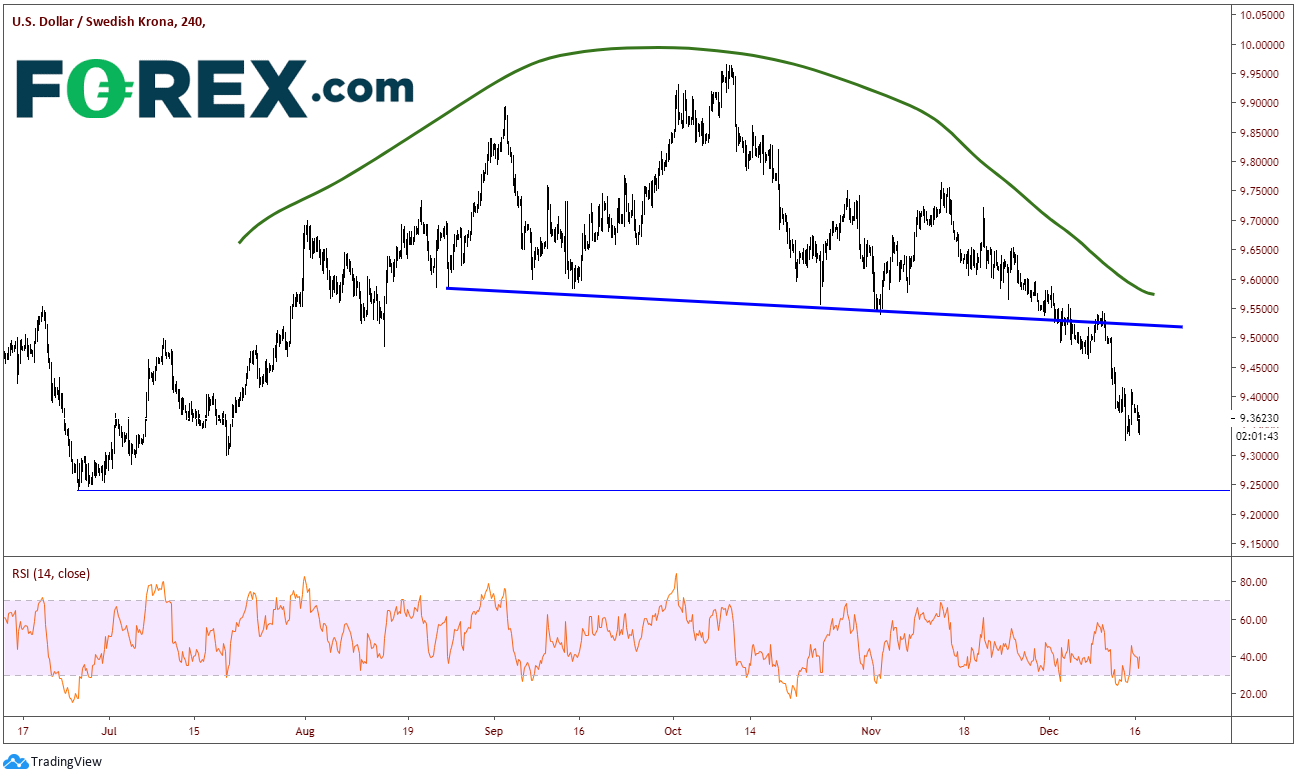 USD/SEK has fallen a long way in a short amount of time.   As Thursday is the Riksbank meeting and the market has been pricing in a rate increase, watch for a “Buy the rumor, sell the fact” type of move before then.  There may be some profit taking ahead of the meeting (this would also allow for the daily RSI to unwind).  If the Bank is hawkish and signals further rate increased, price may be down near the 9.1500 quickly.  If the Bank is dovish and signals “One and done”, price could be back near 9.5500.