Defense stocks: The so-simple-it’s-obvious trade that may be just getting started

Howard Marks, the co-founder of Oaktree Capital Management and author of “The Most Important Thing,” emphasizes the importance of what he calls “second-level thinking” when making trades. Rather than explicitly defining the term, Marks used the following examples in his 2015 note, “It’s Not Easy,” to show the difference between first-level thinking and second-level thinking:

In Marks’ words, “The bottom line is that first-level thinkers see what’s on the surface, react to it simplistically, and buy or sell on the basis of their reactions.”

We only have to go back to the emergence of the COVID pandemic in 2020 to see so-simple-it’s-obvious trades like Zoom Video (ZM) surging 700% in the first ten months of the year, primarily on the back of a thesis so straightforward that a preschooler would understand it: “People can’t see each other in person any more, so they will need to do more video chatting!”.

(Of course, ZM has since given back about 80% of its 2020 gains as countries have gotten a better grasp on the pandemic, so there’s certainly an argument that at least some second-level thinking could have protected traders from a huge loss!)

Why defense stocks may be entering a secular bull market

This long introduction brings us to the so-simple-it’s-obvious, first-level thinking trade that may be just getting started: Defense stocks. Russia’s ongoing invasion of Ukraine has viscerally reminded countries across the globe of the importance of spending on defense and military equipment. To take one example, NATO collectively spent $1.1T on defense in 2021, with large countries like Canada, Germany, Italy, and Spain spending well below the mutually-agreed 2% minimal threshold: 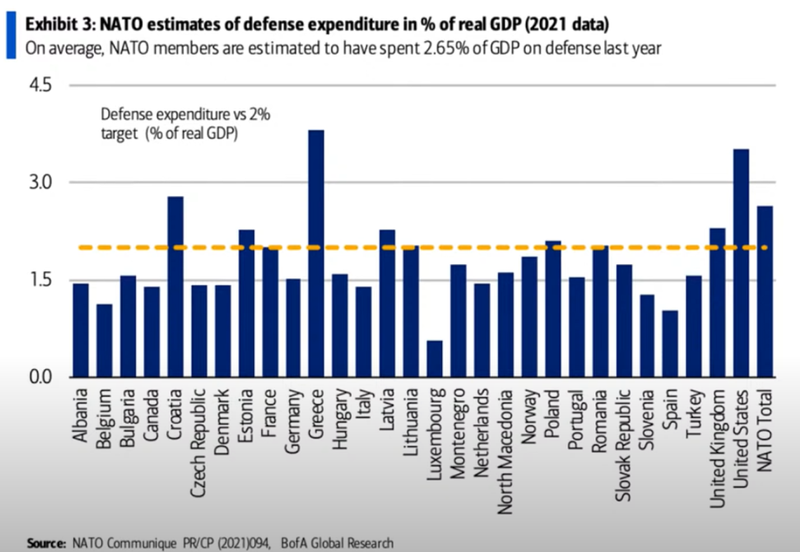 Notably, the US was spending as much as 7% of its GDP on defense during the Cold War, and though we all hope to avoid such a scenario in the future, it shows that there is historical scope for a dramatic increase for all these figures. At a minimum, it seems clear that NATO countries will almost certainly spend substantially more on defense in 2022 than they did in 2021, providing an obvious, but undoubtedly potent, tailwind for major defense companies, one that is likely to persist for years to come.

Defense stocks to watch in 2022 and beyond

Defense companies are heavily dependent on economies of scale and relationships with policymakers, so it’s logical to expect that the largest companies will be among the biggest beneficiaries of increased military spending. The biggest players in the defense industry by revenues are Lockheed Martin (LMT), Raytheon Technologies (RTX), Boeing (BA) and Northrop Grumman (NOC).

As the charts below show, three of these four names have broken out to fresh record highs in the last week, with Boeing’s struggling airplane manufacturing business making it a notable laggard:

With defense spending seemingly poised to surge in the coming quarters, regardless of when and how the Russia-Ukraine conflict comes to an end, traders will likely be looking to buy any dips in shares of LMT, RTX, and NOC in the coming months as long as they remain above their previous highs. For readers who would prefer to play the theme more generally without taking on idiosyncratic equity risk, the iShares US Aerospace and Defense ETF (ITA) holds more than 30 stocks in the sector, with nearly a 50% weighting in the above four names.

As Howard Marks has shown, “beating the market” with contrarian second-level thinking can be immensely profitable, but sometimes the simplest first-level thinking trades can be just as successful if you don’t overthink it!