Then there are the FAANGs. The FAANGs (Facebook, Amazon, Apple, Netflix and Google parent Alphabet) have fared extremely well following mid-March lows, benefiting from the way that covid accelerated the world’s dependence on technology. Consumers switched almost all of their daily tasks online – work, shopping, socialising. As e-sales took off so did digital marketing.  These stocks are not just surviving the covid pandemic, they are thriving in it.

Competition has grown for Netflix but membership numbers at Netflix far eclipse those of rivals. At the end of Q2 NTFL total subscribers were over 192 million, with 73 million from US. Netflix has repeatedly warned that the level of subscriber growth which it has experienced through lockdown is not sustainable. Investors will also be listening closely for any insight into a hotly rumoured price hike that Netflix is considering after a change in language on Q2 call.  Expected Q3 EPS $2.14 on revenue 6.14 billion

Amazon has had a phenomenal performance so far this year significantly benefitting from the spread of covid and importantly its strong run is expected to continue. Amazon’s e-services have become essential for customers, whilst covid fuels online shopping. Furthermore, Amazon’s Web Services is being used by businesses around the world to power their business operations. Amazon is due to release a slew of new products and then there is prime day, which often translates to high sales. Expected Q3 EPS $6.08 on revenue of $92.1 billion

Alphabet generates the lion share of its revenue from digital ads, which may be showing signs of rebounding in the early days of Q3. Drawing comparisons with Snap.  which reported sales jumped 32% in the first 19 days of Q3, this bodes well for Alphabet’s results. Ultimately digital spending could be boosted by explosive e-commerce growth. The company’s cloud business is also growing rapidly, in Q2 the cloud units’ revenue jumped 43% to $3 billion YoY, accounting for nearly 10% of the company’s revenue. Expected EPS $11.80 on revenues $43.66 billion

In Q2 Facebook experienced its slowest revenue growth since its 2012 IPO, FB gets a lot of advertising from local businesses due to its well targeted advertising options. Many of these local businesses now don’t exist. A large chunk of advertising also comes from travel companies, event providers, restaurants, in other words industries which won’t recover overnight. Therefore, revenues could remain moderated. User growth grew reflecting increased engagement from consumers who are spending more time at home. However, costs have also increased on hiring people to regulate controversial content. Antitrust accusations continue to gain momentum. Facebook is up just 26% YTD, behind its peers. Expected EPS $1.82 on revenues $19.4 billion.

The results come after Apple unveiled its iPhone 12, the first major product release in 2 years. Even so, Apple became the first company to achieve a 2 trillion-dollar valuation in August. Apple trades 65% higher YTD as covid made us more digitally dependent that ever. Beyond new devices the Services segment is expected to see continued momentum driven by a robust performance in App Store, Apple Music, video and cloud services. Looking to Apple suppliers for clues, Jabil Inc which makes castings for Apple’s iPhone & iPads posted stronger than forecast Q4 earnings. A positive sign for Apple? Expected EPS $0.70 on revenue $63.63 billion.

Has the price rallied too far?

The FAANGs have an extraordinary run up from the mid -March lows. The FAANG index has surged over 100%. According to analysts at JP Morgan, earnings are expected to back up the price story which is what makes this impressive rally in tech stocks so different to the tech bubble of 2000.

Whilst we saw a 15% pullback in September which unnerved many investors, the tech sell off appears to have calmed for now. The pull back that we saw in September is being put down to more of a playing out of other fears such as the lack of additional stimulus and US – Sino tensions and some profit taking after a phenomenal rally, rather than concerns over the actual FAANGs themselves. JP Morgan remain bullish on FAANGs. Just by way of example, an analyst at JP Morgan sees Amazon trading 10% higher in 12 months’ time at $3400.

After their phenomenal run up this year, there is a good chance that we could start to see a slight fracturing in performance within the FAANGs. Apple, Amazon and Alphabet are more likely to power ahead, whilst Facebook and Netflix could just start to ease behind their peers, mainly because there is less innovation in those stocks. However, this is relative. Compared to the rest of the market even Facebook and Netflix are could still be considered outperformers out-performance. 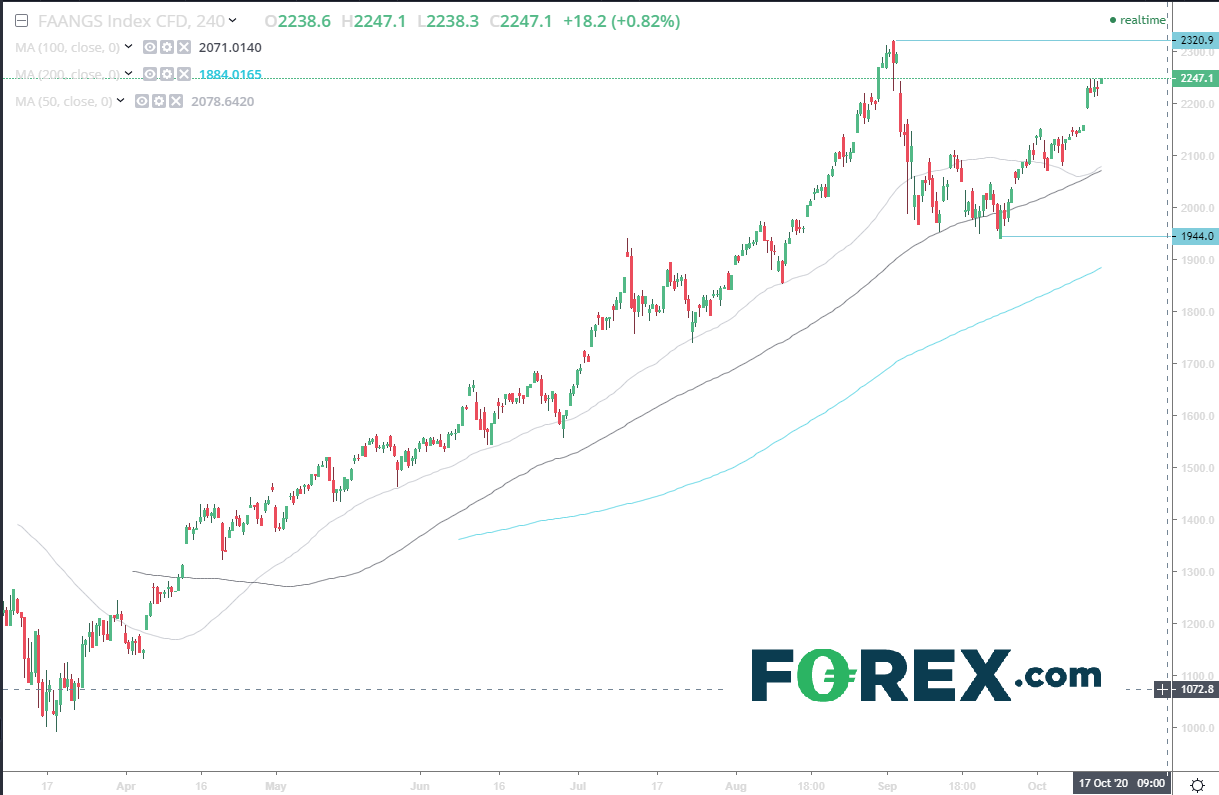