Growth concerns return to the forefront

Following on from a downbeat start to the new week in Asia, weakness for European stocks, crude oil and metals continued during the first half of European session, with the dollar and yen initially extending their advances following the release of poor Chinese data. Treasury yields fell, although this failed to provide any initial support for safe haven precious metals, which slumped along with other commodities. However, as the drop in bond yields deepened, the metals started to bounce off their worst levels, while the dollar started to come off its corresponding highs against a number of foreign currencies. A just-released poor Empire Fed Manufacturing Index print reminds us that it is not just China struggling for growth.

Will it be day of two halves?

Earlier, risk appetite turned sour amid concerns over China's economy after the release of some disappointing data overnight. As we transition to the US session, the markets were still in a more defensive mode, but let’s see if this will turn out to be a day of two halves with some of the markets mentioned above coming off their worst levels.

Talks of US recession back

The Empire State Manufacturing Index plunged in the negative with print of -31.3 vs. +5.1 expected. The details of the report were also awful, including new orders which fell sharply (-29.6 vs. +6.2 last). There’s not an awful lot to look forward to in terms of US data except the NAHB Housing Market Index and Tic Long-Term Purchases. So, keep a close eye on commodity prices to gauge the appetite for risk.

Investor concerns about a recession were already there for Europe and US, so the publication of those weak Chinese numbers overnight further worried investors about the health of the global economy. The fact that the Chinese data promoted a swift response from the PBOC goes to show how concerned Chinese authorities are about domestic demand. The Chinese government will probably need to do more, as monetary policy alone in the form of rate cuts and liquidity injections are not having the desired impact on the economy right now because of reluctance from households and businesses to borrow amid Covid controls.

In case you missed it, Chinese retail sales came in at +2.7% year-over-year in July, representing a slowdown from +3.1% the month before and confounding expectations of +5.0%. Industrial production grew at annual pace of 3.8%, when +4.5% was expected. Fixed asset investment also disappointed.

As mentioned, gold was coming off the lows and bond yields sunk. The metal was in the process of forming a hammer candle but needed to break back above short-term resistance at $1785 in order to tip the balance back in bulls’ favour. 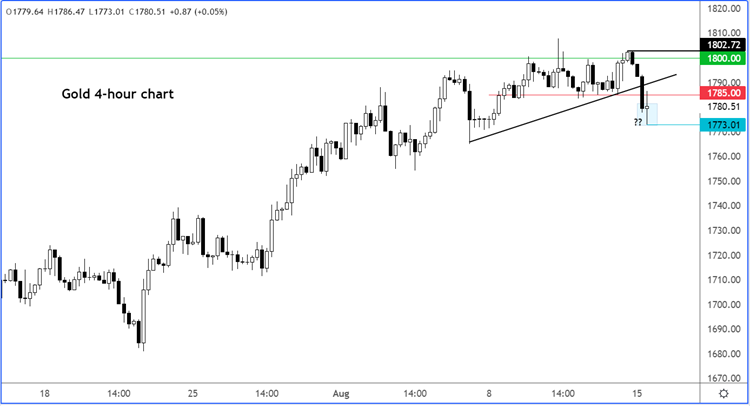 Among the major indices, the DAX is quite sensitive to developments in China. The German index is starting to turn lower from a key inflection point (pre-pandemic high) shown on the chart. The DAX is already facing risks from a weak domestic economy in Germany. So, potential weakness in this market should not come as surprise, although it is far too early to say the recovery has topped out. Indeed, lots of similar short-term resistance levels have already broken, and today’s weakness could just turn out to be a pause. Thus, the bears certainly need to see more evidence of a top, such a lower low. The bulls will equally want to proceed with a bit of caution in light of the big falls in some key commodity prices, and after the DAX’s own 4-week winning run, which makes it a bit “overbought,” in what could still be a prolonged bear market. All told, the bears still have a lot of wood to chop in order to move the needle decisively south insofar as the short-term direction is concerned. 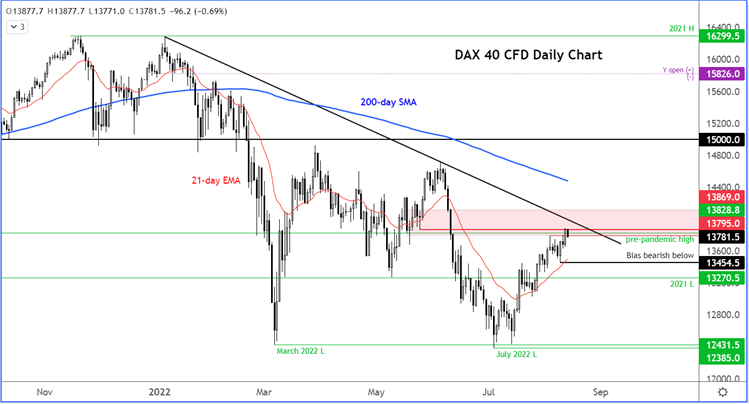