Bitcoin is synonymous with the wider world of cryptocurrency and has an established position as the gold standard within decentralised finance. What is Bitcoin, how much has Bitcoin been worth over time and what factors affect its price? Read on to discover more.

Bitcoin is a digital asset that has enthralled almost anyone who has been involved, even in a small way, in its rollercoaster journey during a relatively brief period in the public eye.

Once the preserve of the geekiest computer nerds, and often negatively associated with criminal activity and the environmental damaged caused by “mining” fresh coins, it has already endured two significant bubbles.

However, as the entry point into the wider world of cryptocurrency and blockchain, Bitcoin has no equal. It commands a staggering percentage of the cryptocurrency sphere, with a market cap more than four times the size of the next biggest coin, Ethereum, and nearly 30 times that of any of the other “alt coins” competing for market share.

What is Bitcoin and how does it work?

Bitcoin is a decentralised digital currency, otherwise described as a “cryptocurrency”. It was conceptualised in 2008 by a person or persons using the name Satoshi Nakamoto.

It began use in January 2009 when its source code was released and a few days later the first transaction was recorded.

Unlike the world’s centralised or “fiat” currencies, Bitcoin is not backed by a central bank. It was designed in response to the 2007-08 banking crisis, at a time when scepticism about the world’s financial structure was building.

Although popular exchanges like Coinbase and Binance commonly do most of the heavy lifting when people want to buy Bitcoin with fiat currency, the transactional fundamentals remain the same: it is sent from user to user on the peer-to-peer bitcoin network without the need for third-party verification. Transactions are verified through cryptography and recorded in a public distributed ledger called a blockchain.

The creation of Bitcoins comes through the mining process – in which the operators of powerful computers (often using expensive and electricity-draining mining “rigs”) are rewarded for providing the security that underpins the blockchain.

Take a look at the Bitcoin price history chart to understand some of the key drivers of the cryptocurrency's price, and when they occurred. 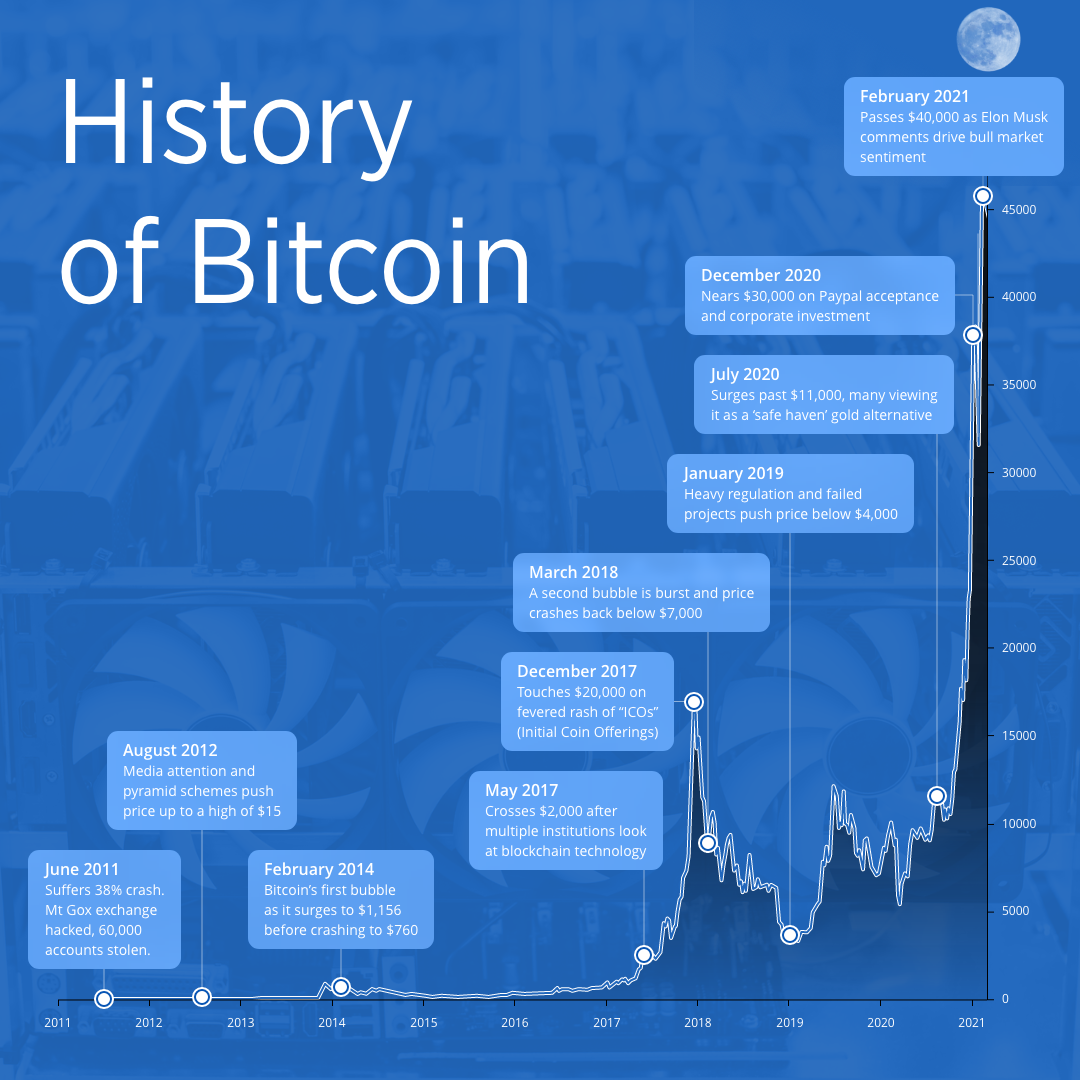 What causes Bitcoin’s price to go up or down?

Bitcoin’s price movements are influenced by a wide range of factors. Institutional or celebrity of support of the coin often triggers rapid price gains, while media hype and support for wider blockchain projects also help lift the price.

Factors to pull its value downwards have included regulatory involvement, sophisticated hacking operations and “FUD” (Fear, Uncertainty and Doubt) concerning its own long-term value, as well as those of other cryptocurrencies. Scarcity is a factor that has helped drive bull markets in the value of Bitcoin. It has been stipulated that only 21 million Bitcoins will ever be created which means the last Bitcoin will be mined in the year 2140.

As a finite resource, Bitcoin has correlations with a commodity such as gold and even came to be defined as “digital gold” during its 2020 bull run. It was speculated that investors were seeking safe haven refuges for their funds as the coronavirus pandemic triggered uncertainty about other trading instruments. An earlier influence that triggered a sharp price increase was the 2017 spate of ICOs. These “Initial Coin Offerings” were the cryptocurrency sector’s version of the more familiar IPOs. The timing of the ICO boom was not accidental. This was an era of hyped buzz about blockchain and decentralised finance; much of that, in turn, was facilitated by a media keen to explore Bitcoin and explain what some regarded as a financial revolution to its readers.

Many new exchanges were opened across multiple jurisdictions; liquidity improved and traders began to see speculative opportunities. Dozens of independent blockchain projects were launched, many of them given substantial marketing budgets, and ICOs allowed investors to be stakeholders in this new wave of companies.

Bitcoin went from a few hundred dollars a coin at the beginning of 2017 to an astonishing mark fractionally shy of $20,000 a coin in late December. Many reckoned the surge in value was unsustainable, comparing it to 17th century Dutch tulip mania. And they were right.

Why did Bitcoin crash after the 2017 bull run?

Bitcoin crashed after the 2017 bull run when widespread disillusionment quickly replaced the excitement that had been felt by so many new adopters.

The majority of the ICO-funded projects showed few signs of life. Bitcoin was also in the grip of regulators in various jurisdictions; fears over its long-term usability, based on complexity and slow transactional speed, as well as various costly cyber attacks, also gnawed away at public confidence in the sector.

In the early weeks of 2018, once the exchanges were flooded with sell orders, there was little to stop the bears. The market eventually found its bottom in early 2019 and began a push back to $10,000. Long-term advocates of Bitcoin were not prepared to abandon ship altogether.

As with many asset classes, the onset of the coronavirus pandemic in March 2020 created tremors, but the recovery was quick and from Q4 onwards Bitcoin was all the rage once again.

PayPal announced it would accept Bitcoin, big firms diverted treasury assets into the world’s favourite crypto, and there was a new spate of blockchain projects. The phrase DeFi, referring to any decentralised finance project, gained traction.

Bitcoin passed $10k in October, $20k just after Christmas and $30k on January 9. After some profit-taking triggered in part by miners cashing out their gains, its price was relaunched into the stratosphere by the billionaire founder of Tesla, Elon Musk.

On January 29, he added #bitcoin to his Twitter bio and further promoted Bitcoin with his comments on social audio app Clubhouse. The coin surged nearly 20% in value. On 8 February, he revealed Tesla had purchased $1.5bn of the crypto and a day later traders had to pay $48,000 for a single Bitcoin.

Fintech stocks to watch in 2023
By:
Rebecca Cattlin