The German DAX was leading European indices lower by lunchtime in Europe, with losses of over 1% as concerns over economic growth and inflation lingered, before bouncing off its lows a little ahead of the US open. Almost every sector was in the red, except some banks, insurers and energy stocks. There wasn’t much in the way of fresh catalysts behind the earlier sell-off, with investors keen to book some profits following the recent recovery for global stocks, and ahead of key US economic data. Still, the weakness should not be ignored, given how the markets have behaved this year. It could be an early sign for a bumpier road ahead.

Since mid-July, European stocks have been pushing higher, along with US benchmarks. The recovery has been fuelled by somewhat positive corporate earnings as well as hopes that the Federal Reserve will soon proceed less aggressively with its interest rate increases as inflationary pressures show tentative signs of easing and in the wake of a technical, but questionable, recession in the US.

But is the bullish momentum fading again?

First thing I want to point to is the struggling Chinese equity markets (see the sub chart). Remember that China led the global stock markets lower this year, so this is definitely something to keep a close eye on.

As far as the DAX itself, well it has turned lower after failing to hold above the 13680 resistance level: 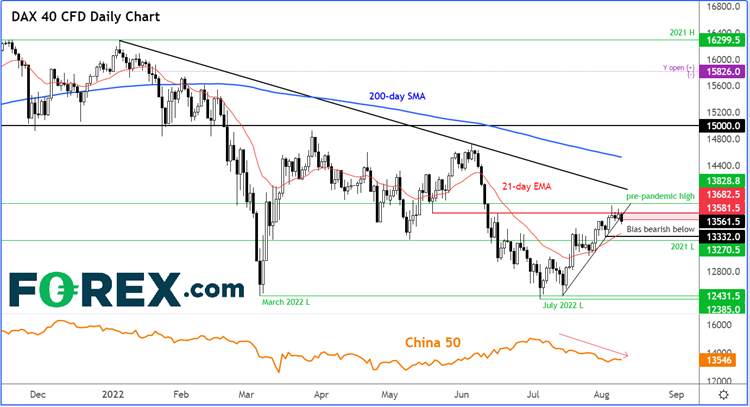 In the process, it has now broken below its short-term bullish trend line. This on its own is not too significant, as we have seen similar trends break before the rally resumed in recent weeks. However, it certainly serves as a warning sign for the bulls. But in the event we see the German index go on to break below the most recent low at 13332, then we will have our first lower low in place since this recovery phase of the trend started back in mid-July.

Until and unless that happens, the bears will equally want to proceed with a bit of care, especially as we have key data coming up on Wednesday, namely US CPI, which could result in a sharp change in risk appetite.

US CPI will undoubtedly be the most important macro release of the week on Wednesday. Inflation might have already come down more than expected in July, which may be another reason why the dollar longs/bulls are refusing to keep the currency bid.

There are reasons why inflation will slow going forward. We saw the ISM PMI reports reveal sharp slowdown in prices paid sub-indices. Global supply chain pressures have eased. Shipping costs have fallen. Commodity prices have dropped. Consumers’ buying power have been squeezed, which should be disinflationary. Clearly, it will be some time before these changes filter through the economy and show up in data.

Also important to watch this week will be Friday’s release of the University of Michigan’s closely-followed Consumer Sentiment and Inflation Expectations surveys. Thanks to soaring prices of everything from gas to food, consumer sentiment in the US has been dropping rapidly in recent months, mirroring the situation in Europe and the rest of the world. However, the US economy has weathered the inflation storm better than other regions, which is why the dollar has been so strong. But is the momentum changing? If we see signs of a struggling US consumer, then this could hurt risk appetite further.

On Friday, we will also have data dump from the UK, including GDP. This has the potential to impact sentiment in the UK, but may also affect the DAX and other European indices. UK GDP barely grew in Q1 as output expanded by 0.8% compared to 1.0% expected. With several macro indicators suggesting the economy contracted in the second quarter, the pound fell below $1.20 handle before recovering as USD started to fall back. However, the Bank of England has estimated that growth will decline for 5 consecutive quarters. Let’s see if they are right and how severe the potential weakness will be.