FOMC meeting recap: “Progress” toward taper, but not “substantial” yet

With no updated economic forecasts at this month’s meeting, there were only two major areas of focus for traders: The monetary policy statement and Chairman Powell's press conference

As we noted in Monday’s FOMC meeting preview report, the Federal Reserve was never going to make any immediate changes to monetary policy at today’s meeting, but the event would still provide a valuable look into how the central bank is viewing the resurgence of COVID cases across the country and the ongoing elevated inflation readings.

With no updated economic forecasts at this month’s meeting, there were only two major areas of focus for traders:

Unlike recent months, there were some noteworthy changes to the central bank’s monetary policy statement, and on balance, they were more hawkish (read: optimistic on the economy) than some traders were expecting.

Relevant changes to the statement include the following:

The fact that the Committee felt comfortable highlighting the economy’s progress (though notably not the “substantial further progress” that Powell has outlined as a threshold for tapering) suggests that the central bank could theoretically still feel comfortable announcing its taper plans at the late-August Jackson Hole Symposium, rather than delaying them as some analysts had expected.

In his ensuing press conference, Fed Chairman Powell (as usual) revealed a more nuanced and less dramatic view than the statement implied. Powell reiterated that the Committee expected inflation to drop back to the 2% range but could ultimately turn out to be higher and more persistent than expected. He also repeatedly noted that the inflationary comments in the statement represent a joint communication from all the members of the FOMC, suggesting that there may still be some disagreement about how transitory the current price pressures will ultimately prove.

Separately, Powell said that the economic data still had “some ground to cover” before meeting the threshold for tapering and that the central bank will provide advance notice before enacting any changes on that front. While it would be premature to rule anything out, these comments suggest that the central bank is more likely eyeing a September or November taper announcement, rather than at the August Jackson Hole Symposium.

The initial reaction to the release of the statement suggested that the central bank was a bit more hawkish than expected, with the US dollar rising, gold dipping, and the yield on the benchmark 10-year treasury bond ticking up 2bps. However, each of those moves had reversed by the time Chairman Powell took the stage for his press conference and as we go to press, the market’s reaction is more subdued. The most notable development is a touch of weakness in the US dollar, which after an initial pop, is now trading lower about 20 pips against its major rivals as traders bet against a taper announcement next month: 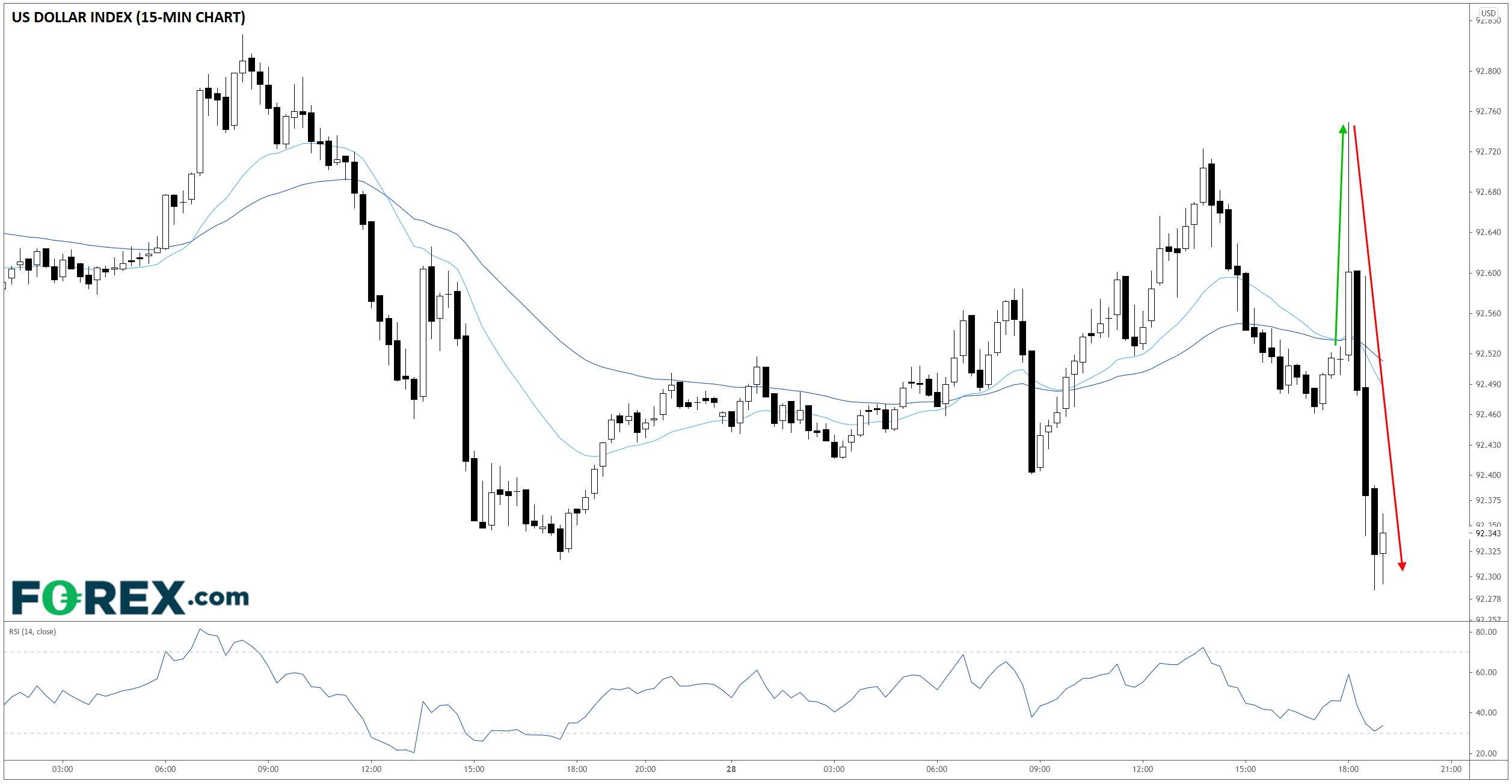 Moving forward, traders will remain hyper-focused on incoming data, with inflation and labor market readings taking the most precedence. In that vein, Friday’s Core Personal Consumption Expenditures (Core PCE) release will be critical, with a hotter-than-expected reading likely needed to keep the door open on an August taper announcement.