We use cookies, and by continuing to use this site or clicking "Agree" you agree to their use. Full details are in our Cookie Policy
Accept
Advanced

Progress to certificate:
0%
0 out of 9 lessons completed

If you see an ABCD that forms another retracement leg instead of reversing, then you could have a three-drive pattern on your hands.

What is the three-drive?

The three-drive is a rare price pattern formed by three consecutive symmetrical 'drives' up or down. In its bullish form, the market is making three final drives to a bottom before an uptrend forms. In a bearish three-drive, it is peaking before the bears take over. 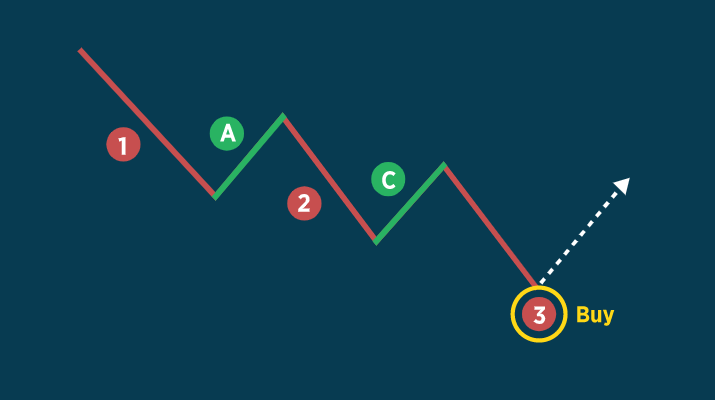 A three-drive contains two overlapping ABCD patterns. If you can spot an ABCD, then you should find it easy to spot a three-drive too.

While they don't appear often, three-drives can signal a high chance of an impending market reversal. The resulting trade tends to have a very strong risk-reward ratio, so the pattern is prized by technical traders.

To find a three-drive, simply look for an ABCD with an extra leg – it might be useful to think of it as an 'ABCDEF pattern'.

It's important, however, to take extra care when hunting for three-drives. Ideally, the pattern should be immediately clear. If it isn't, then you might not have found a three-drive.

Much like an ABCD, you confirm a three-drive pattern using Fibonacci ratios.

Symmetry is also key to a three-drive. The elapsed times of the retracements and drives should be symmetrical. If they aren't, then you haven't found a valid three-drive pattern.

You can trade a three-drive pattern in the same way as an ABCD. Wait for the final drive to end, then trade the reversal that should follow – opening a buy position if the market has bottomed, and a sell if it has topped.

The third drive should mirror the one that preceded it, so you can identify when the market is likely to reverse and plan your entry accordingly.

Make sure to watch for significant gaps at any point. These can be a sign that the pattern is invalid – so if you see one, wait for further confirmation that a reversal is on the horizon.

If the pattern fails, then a strong continuation may be on the cards.