Any analyst or trading guide will tell you how important it is to manage your risk. However, how does one go about managing that risk? And what exactly do they mean by managing risk? Here is a step-by-step guide to one of the most important concepts in financial trading.

This is a personal choice for anyone who plans on trading any market. Most trading instructors will throw out numbers like 1%, 2% or on up to 5% of the total value of your account risked on each trade placed, but a lot of your comfort with these numbers is largely based on your experience level. Newer traders are inherently less sure of themselves due to their lack of knowledge and familiarity with trading overall or with a new system, so it makes sense to utilize the smaller percentage risk levels.

Once you become more comfortable with the system you are using, you may feel the urge to increase your percentage, but be cautious not to go too high. Sometimes trading methodologies can produce a string of losses, but the goal of trading is to either realize a return or maintain enough to make the next trade.

For instance, if you have a trading method that places one trade per day on average and you are risking 10% of your beginning monthly balance on each trade, it would only theoretically take 10 straight losing trades to completely drain your account. So even if you are an experienced trader, it doesn’t make much sense to risk so much on one single trade.

On the other hand, if you were to risk 2% on each trade that you place, you would theoretically have to lose 50 consecutive trades to drain your account. Which do you think is more likely: losing 10 straight trades, or losing 50?

The amounts of methodologies to use in trading are virtually endless. Some methods have you use a very specific stop loss and profit target on each trade you place while others vary greatly on the subject. For instance, if you use a strategy that calls for a 20-pip stop loss on each trade and you only trade the EUR/USD, it would be easy to figure out how many contracts you may want to enter to achieve your desired result. However, for those strategies that vary on the size of stops or even the instrument traded, figuring out the amount of contracts to enter can get a little tricky.

One of the easiest ways to make sure you are getting as close to the amount of money that you want to risk on each trade is to customize your position sizes. A standard lot in a currency trade is 100,000 units of currency, which represents $10/pip on the EUR/USD if you have the U.S. dollar (USD) as your base currency; a mini lot is 10,000.

If you wanted to risk $15 per pip on a EUR/USD trade, it would be impossible to do so with standard lots and could force you in to risking either too much or too little on the trade you place, whereas both mini and micro lots could get you to the desired amount. The same could be said about wanting to risk $12.50 per pip on a trade; both standard and mini lots fail to achieve the desired result, whereas micro lots could help you achieve it.

In the realm of trading, having the flexibility to risk what you want, when you want, could be a determining factor to your success.

There may not be anything more frustrating in trading than missing a potentially successful trade simply because you weren’t available when the opportunity arose. With forex being a 24-hour-a-day market, that problem presents itself quite often, particularly if you trade smaller timeframe charts. The most logical solution to that problem would be to create or buy an automated trading robot, but that option isn’t viable for a large segment of traders who are either skeptical of the technology/source or don’t want to relinquish the controls.

That means that you have to be available to place trades when the opportunities arise, in person, and of full mind and body. Waking up at 3am to place a trade usually doesn’t qualify unless you’re used to getting only 2-3 hours of sleep. Therefore, the average person who has a job, kids, soccer practice, a social life, and a lawn that needs to be mowed needs to be a little more thoughtful about the time they want to commit. Perhaps 4-Hour, 8-Hour, or Daily charts are more amenable to that lifestyle where time may be the most valuable component to trading happiness.

Another way to manage your risk when you’re not in front of your computer is to set trailing stop orders. Trailing stops can be a vital part of any trading strategy. They allow a trade to continue to gain in value while the market price moves in a favorable direction, but automatically closes the trade if the market price suddenly moves in an unfavorable direction by a specified distance.

Many market participants are knowledgeable of the fact that most popular markets close their doors on Friday afternoon Eastern Time in the US. Investors pack up their things for the weekend, and charts around the world freeze as if prices remain at that level until the next time they are able to be traded. However, that frozen position is a fallacy; it isn’t real. Prices are still moving to and fro based on the happenings of that particular weekend, and can move drastically from where they were on Friday until the time they are visible again after the weekend.

This can create “gaps” in the market that can actually run beyond your intended stop loss or profit target. For the latter, it would be a good thing, for the former – not so much. There is a possibility you could take a larger loss than you intended because a stop loss is executed at the best available price after the stop is triggered; which could be much worse than you planned.

While gaps aren’t necessarily common, they do occur, and can catch you off guard. As in the illustration below, the gaps can be extremely large and could jump right over a stop if it was placed somewhere within that gap. To avoid them, simply exit your trade before the weekend hits, and perhaps even look to exploit them by using a gap-trading technique. 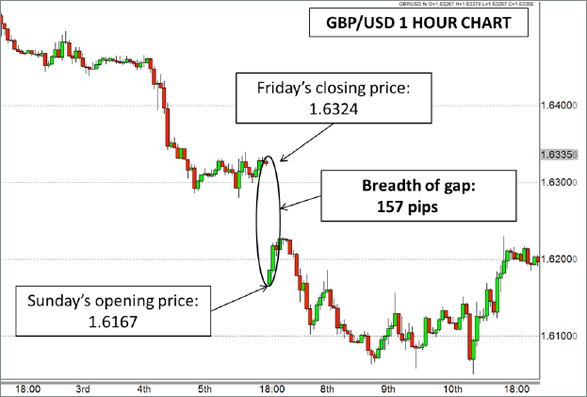 News events can be particularly perilous for traders who are looking to manage their risk as well. Certain news events like employment, central bank decisions, or inflation reports can create abnormally large moves in the market that can create gaps like a weekend gap, but much more sudden. Just as gaps over the weekend can jump over stops or targets, the same could happen in the few seconds after a major news event. So unless you are specifically looking to take that strategic risk by placing a trade previous to the news event, trading after those volatile events is often a more risk-conscious decision.

There is a specific doctrine in trading that is extolled by responsible trading entities, and that is that you should never invest more than you can afford to lose. The reason that is such a widespread manifesto is that it makes sense. Trading is risky and difficult, and putting your own livelihood at risk on the machinations of market dynamics that are varied and difficult to predict is tantamount to putting all of your savings on either red or black at the roulette table of your favorite Vegas casino. So don’t gamble away your hard-earned trading account: invest it in a way that is intelligent and consistent.

So will you be a successful trader if you follow all six of these tenants for managing risk? Of course not, other factors need to be considered to help you achieve your goals. However, taking a proactive role in managing your risk can increase your likelihood for long term success.