Market volatility is a reality that, before long, every trader has to face. When the markets are moving, here are a few strategies to help you manage risk and come out on top.

1. Color between the Lines

To trade the trend, all you have to do is pretend that you are coloring between the lines. When the market gets near support, look for it to rise; if it approaches resistance, prepare for a drop. The cool thing about trending markets is that they’re so easy to spot, and it doesn’t matter which timeframe you look at! Trends can turn up just as easily in a two-minute chart as a two-hour chart. Take a look at this chart of the EUR/USD (Euro / U.S. Dollar) on a two-minute timeframe: 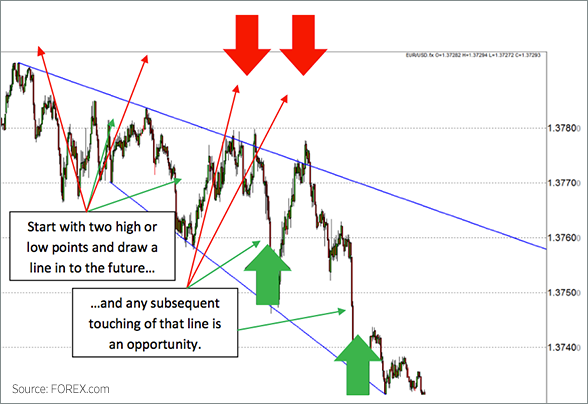 It’s that easy. Unfortunately, it’s not that easy to determine how many pips you look to risk or gain; that is a skill that is more determined by experience than anything else.

2. Break Out of the Mold

Like it or not, traders often act in herds. Occasionally levels will break violently as too many traders are aware of them and stop orders begin to pile up around their edges.

An alternative to trying to pick out where the market might turn around is to poach that level and trade the breakout.

The key is to find the level you are looking to exploit, set up the order before the market reaches it and keep your stops and targets within striking distance of the spikes. Sometimes that means only looking to get 15-20 pips on a currency pair that typically moves close to 100 pips per day, but if fast-paced, electric opportunities are what you seek, breakouts are rarely matched in their levels of excitement. Admittedly, breakouts tend to be a little quick and require you to be alert, but they can be great opportunities. 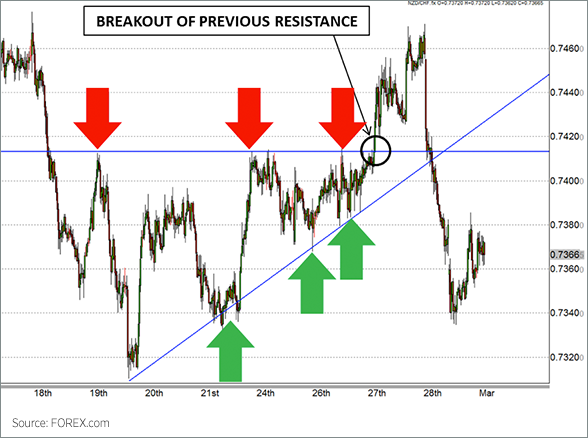 One potentially exciting and impulsive way to trade is to place trades around major economic news events. Trading news announcements can be risky due to the large moves that can follow a news release.  Therefore, you should be prepared well ahead of time.

First of all, making sure you place your trade BEFORE the news event hits is one of the vital keys in doing this successfully. You can make an educated guess as to what the market will tell you before the event is released as well as make a logical guess as to which way the market will move based on your educated assumption.

As an example, consider the event that typically creates the most movement during any given month: the U.S. release of Non-Farm Payrolls. As a general rule, the USD/JPY (U.S. Dollar / Japanese Yen) typically has the most logical reaction to major US economic releases; that is to say that if data is bad for the US, the USD/JPY goes down, and if data is good for the US it goes up.

Before NFP is officially released, there are a variety of economic indicators that also measure employment and can be used as guides to making an educated guess. By aggregating these pre-NFP releases and scoring them on their previous effectiveness, one can then venture a “guess” as to what NFP will reveal.

Since the educated guess calculated a bad result, the logical assumption would be to sell USD/JPY before the release. Of course, it is vital to use stops and targets as managing a wrong guess is paramount to saving the balance of your account. As you can see from the chart below, predicting a bad result would have been a pretty good guess. 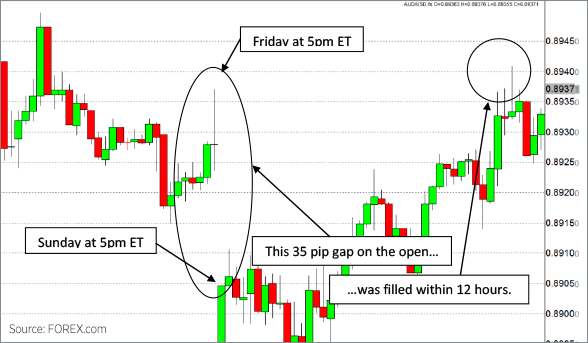 The NFP report isn’t the only one that can be utilized in this fashion either. For instance, you could pull together Consumer Confidence data to guess what US Retail Sales might be, or compile inflationary data to guess the tone of a central bank’s monetary policy decision. The possibilities are endless.

Every Friday afternoon at 5pm Eastern Time, the forex market closes for the weekend. However, the lack of movement on your trading screen is an illusion; the market is still moving. Prices continue to revalue themselves based on what is happening around the world even when markets are closed; you just don’t see that movement until Sunday at 5pm Eastern Time. This results in a “market gap.”

One very simple way to trade volatility would be to look for these gaps that occur over the weekend and attempt to trade them. Just like any strategy to trade, it doesn’t work every time, so be sure place your stops and targets at reasonable levels.

For instance, let’s assume China released some data over the weekend while markets were closed that showed that their economy was contracting more than most expected. The typical reaction to this type of news would be for currencies of nations that are heavily reliant on trade with the Asian Giant to depreciate, the AUD being chief among them. Since the markets are closed though, you don’t see that movement until Sunday at 5pm Eastern Time when the forex market opens for business for the week.

What is left behind is what is called a “market gap.” It is a region on your chart where a candle (or bar) jumps from one price to a completely unrelated price with nothing in between. Then, as if on cue, the market sometimes ambles its way back to the price that it closed at on Friday. This is called “closing (or filling) the gap.” 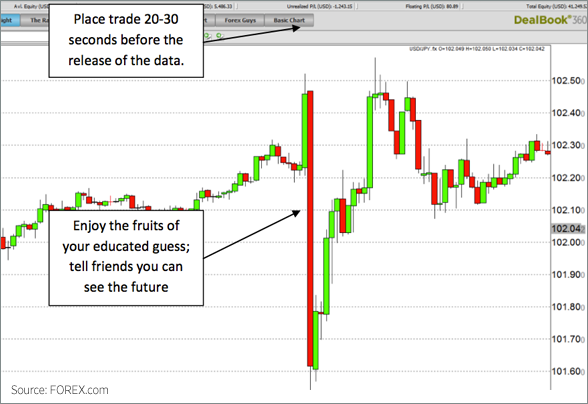 Simply put, there are many ways for you to have an exciting time trading the market. While every methodology laid out here has its merits, they also have their potential for unmitigated disaster. Being laser-focused on managing risk and making sure that your spontaneity doesn’t turn to recklessness is a vital component to trading for the long term.

For more ideas on when and where to trade, follow us on Twitter at @FOREXcom, and stay up to date on market interactions with our Research Team.

Contingent orders may not necessarily limit your risk for losses.