2022 Conservative Party leadership election: Who will be the UK’s next PM?

When is the UK’s next election?

What is the UK PM election process?

Initially, any candidate who received a nomination from at least 20 Members of Parliament (MPs) was eligible, resulting in eight candidates that were subsequently whittled down to two frontrunners through a series of secret votes.

Throughout the month of August, the candidates have engaged in a series of debates and hustings laying out their plans for the country. In the coming weeks, the nearly 200,000 card-carrying members of the Conservative party will vote by mail for their favored candidate, with the formal winner announced on September 5.

Who are the UK PM candidates?

The two remaining candidates are Rishi Sunak and Liz Truss.

Rishi Sunak, 42, is best known for serving as the Chancellor of the Exchequer during the COVID pandemic, when he supported extensive government spending to keep the economy afloat. Prior to entering politics, Sunak worked at an investment bank and co-founded a hedge fund. He was first elected as an MP in 2015 representing North Yorkshire constituency of Richmond.

Liz Truss, 46, is the current Foreign Secretary and served in cabinet posts under David Cameron, Theresa May and Boris Johnson. She was a former president of the Oxford University Liberal Democrats but joined the Conservatives in 1996 and was first elected in 2010 as MP for South West Norfolk.

For traders, the most relevant policies center on the economy.

One of the starkest differences between the two candidates is on tax policy. Truss has promised aggressive tax cuts “from day one,” including reversing a rise in social security contributions and cancelling 2023’s scheduled rise in corporate taxes. Meanwhile, Sunak indicated that he will also look to reduce taxes, but only after inflation has been brought under control first.

Not surprisingly, both candidates agree that inflation and the cost of living are among the most pressing issues. Whereas Truss has proposed an emergency budget and tax cuts to get money in citizens pockets quickly, Sunak prefers targeted measures such as energy subsidies to address the surging energy bills. Truss has also hinted at changing the Bank of England’s mandate to focus more explicitly on price pressures.

When it comes to defense spending, both candidates are against spending cuts, though once again, Truss has staked out a more aggressive position with her proposal to increase defense spending to 2.5% of GDP in 2026 and 3.0% in 2030. In contrast, Sunak has indicated that he would view the current 2% of GDP spending “as a floor, not a ceiling,” but has not set explicit goals for increasing that spending.

While not explicitly centered around the economy, the candidates’ stances on Brexit will also be key factors in the election. Sunak voted for Brexit in 2016, while Truss voted to remain, though she’s since changed her mind. Both candidates have been critical of the Northern Ireland Protocol, a key part of the UK's post-Brexit deal with the EU. In a tangentially related issue, both candidates have championed the unity of the UK amidst talk of another Scottish Independence Referendum, which could come to a head in the coming months.

We’ll discuss what these policy proposals may mean for pound sterling and the FTSE 100 later this week, so be sure to check back in for more detailed analysis!

What are the polls showing?

As we go to press, Liz Truss appears to be the clear favorite in early polling. POLITICO’s poll of polls has Truss at 55% of the vote vs. Sunak at 32% (12% are still undecided), and a recent Opinium poll showed Truss with 61-39 advantage among decided voters. While there’s still time for Sunak to close the gap in the coming weeks, Truss has a commanding lead at the moment. 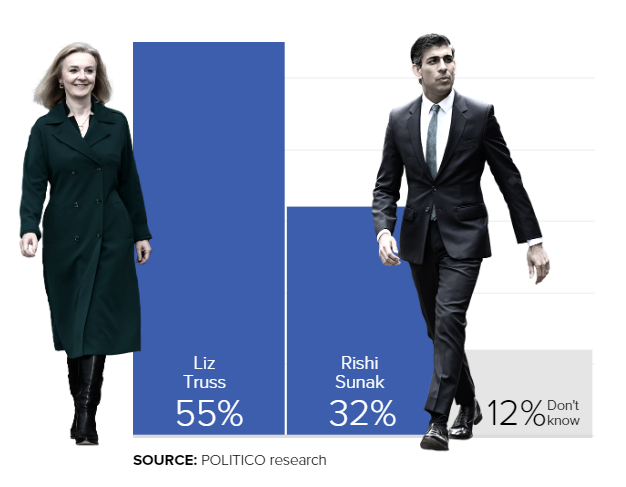 As a final note, the UK is scheduled to hold its next general election by January 2025 at the latest (the incoming prime minister could choose to call a vote before then), so the winning candidate will have no more than 15 months to audition for the job before facing voters again.