How will the market react to CPI?

Well, it obviously depends on the data, doesn’t it? But it is not all about today’s CPI print and the immediate reaction to the data won’t necessarily be a precursor for future trends in the markets.

There’s a lot been said about the US potentially hitting “peak inflation,” which may explain why traders have taken their feet off the gas in the last couple of days, allowing equity indices and government bond prices to stabilise a little, while the dollar has cooled off a tad.

There are 3 main considerations to take into account after the CPI data is released.

All told, I don’t expect to see a major reversal in the trends today. As such, I maintain a moderately bearish outlook towards equities due to central bank tightening, neutral towards gold and silver, and slightly bullish on the dollar.

EUR/USD stuck between a hard place and rock

Above, I wrote ‘slightly’ bullish on the dollar because much of the Fed’s future tightening is already priced in. But with some of the other major central banks, including the ECB, not so keen to tighten its belt fast or very tightly, and given the ongoing Ukraine situation the outlook weighing on economic activity in Europe, the EUR/USD remains bearish for now.

Here’s a weekly chart of the EUR/USD: 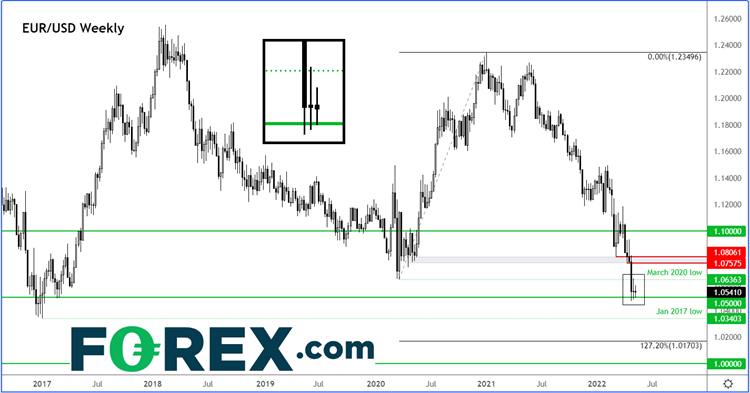 Source for all charts used in this article: StoneX and TradingView.com

After breaking the March 2020 low at around 1.0635 at the back end of April, the EUR/USD spent the first week of May consolidating below this level. It formed a small doji candle there, as dip buyers attempted to defend the psychologically-important 1.05 handle but lacked conviction to cause a reversal in the bear trend. The doji candle points to indecisiveness, which is hardly a surprise after the Fed talked down the prospects of 75 basis point rate hikes and ahead of the publication of the CPI data.

Nevertheless, the trend remains bearish and a clean break below 1.05 could see the EUR/USD take out the January 2017 low at 1.0340 next, and maybe even go lower.

The bulls on the other hand will need a lot of wood chopping before they can take control of short-term price action. If they manage to push rates back above the March 2020 low, this would be a welcome sign for them, although they will then face further resistance around 1.0755 to 1.0805 range, an area which was previously support. Only a decisive break above 1.0805 would be deemed a bullish technical breakthrough, for that will completely undo the most recent breakdown.

Whether the abovementioned first line of support (~1.05) or resistance (~1.0635) breaks may be determined by the publication of Wednesday’s US CPI report.