After a steep selloff particularly in tech stocks, US stocks are looking to open higher as bond yields eased down from yesterday’s 14 month high. However, the cyclical dominant Dow Jones is the only index on course to end the week in positive territory.

There could be heightened volatility given quadruple witching expires at the end of the day.

Nike – trades -2.6% pre-market after releasing mixed results. Nike reported higher Q3 profits, although sales fell short of forecasts, dropping 10% YoY. Sales will be hit by ongoing congestion at ports in the US and amid ongoing store closures in Europe. However, Nike did see digital sales continue to pick up momentum. EPS 90c vs 76c on Revenue $10.36 billion versus $11.02 billion expected.

FedEx – trades 5% higher announcing that its quarterly profit jumped more than expected on higher prices and surging volume, boosted by the pandemic fueled rise in e-commerce deliveries during the holiday season.

Where next for Fedex share price?
After trending sharply lower through December and January, hitting a low of 235.00, FedEx has been crawling higher.
Today’s 5% bounce on the open has seen the share price jump over its ascending trendline dating back to early January. It also trades well over its 20 & 50 sma. The 20 sma recently crossed above the 50 sma in a bullish signal.
Furthermore, the RSI is supportive of further gains. With this bullish break out, buyers could target December’s high 300.00.
Immediate support is seen at 275.00 the ascending trendline resistance turned support, ahead of the 20 sma at 260.00. 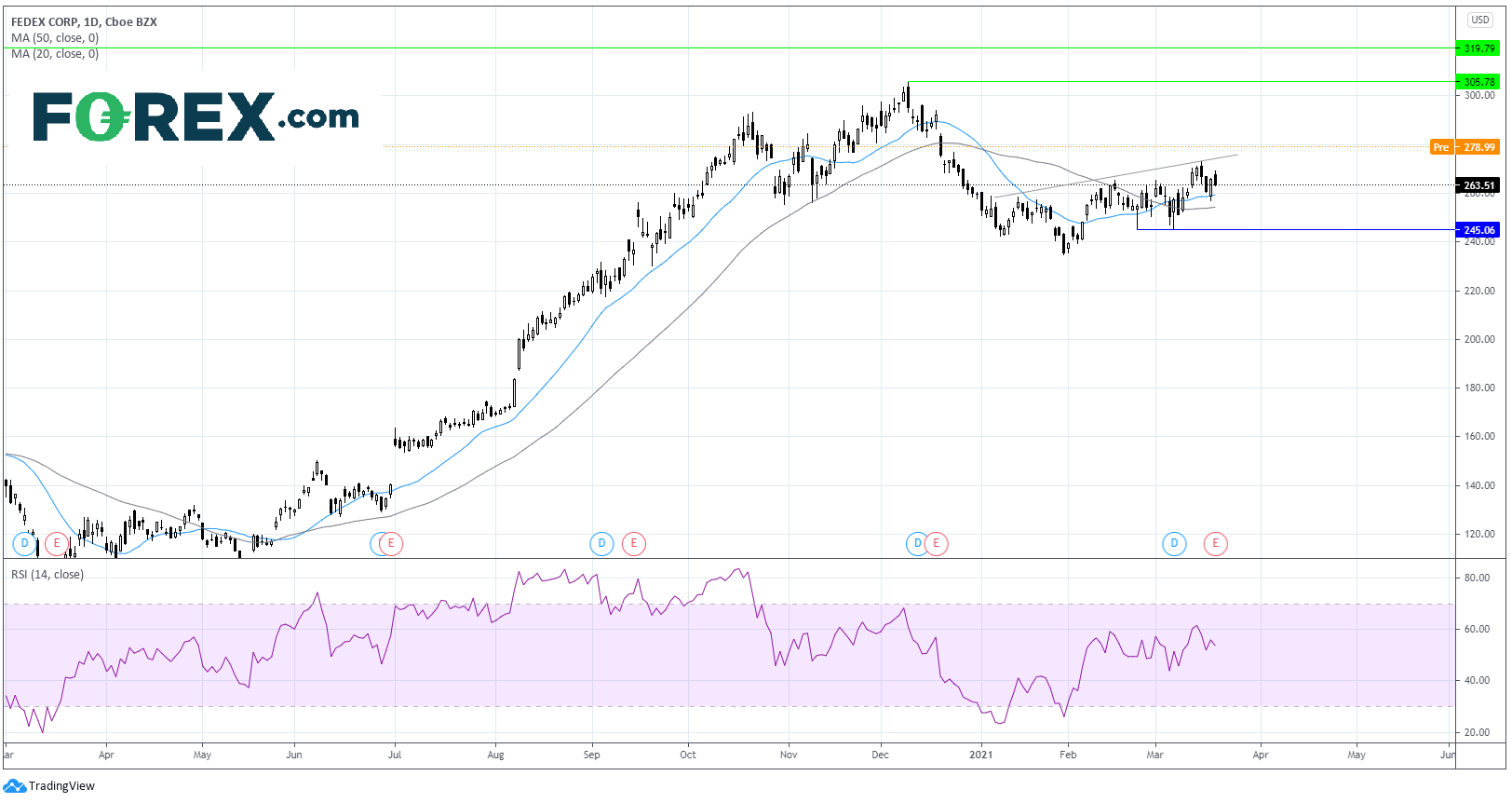 US – China relations have a frosty start

The first face to face meeting a between President Biden and Chinese officials in Alaska set off on the wrong foot with the two sides hurling insults. Expectations were low for the meeting with China standing firm that issues in Xinjiang, Hong Kong and Taiwan are domestic affairs.

The two-day talks are set to conclude today.

The BoJ famed for its decade long assert purchase programme hinted that it may be losing faith in its approach to avoid deflation. The BoJ abandoned its pledge to buy 60 trillion yen worth of bonds instead looking to other tools.

This was the final central bank meeting of the week which saw Fed and BoE stay pat on policy whilst Bank of Russia, Brazil and Turkey gave hawkish surprises.

FX markets are muted on Friday trading within familiar ranges. After a weaker start the US Dollar is creeping higher, even a treasury yields slip lower.

GBP/USD has given up earlier gains after public sector net borrowing came in at an eye opening £19.1 billion in February, the highest ever amount in February, but was still less than the £21 billion forecast. Elevated covid spending and falling tax receipts were to blame.

Oil is steadying after a 7% sell off in the previous session – the largest one day decline for the commodity since April. Concerns over rising covid cases in Europe and a renewed lockdown in France unnerved investors, despite falling covid cases in the US the world’s largest oil consumer. The stronger US Dollar added to oil’s woes. However, the price rebounded of the 50 sma and has retaken $60.00.

The Baker Hughes rig count is due later today.