What is an IPO and how does it work?

What is an IPO?

An IPO is the process of a private company listing its shares on a public stock exchange – also known as ‘going public’. Initial public offerings (IPOs) are the first opportunity to invest in a unit of ownership in a company and receive shareholder rights.

Public share issues enable a company to raise money from the public, rather than relying on private capital. This gives the firm a much wider pool of capital it can use to pay off debts, fund initiatives and raise their profile.

Discover the top US IPOs to watch in 2021

The company will offer its shares via investment banks, which are known as the underwriter of the transaction. These banks determine the level of interest in the company’s shares and the risks involved in the business’s decision, as well as suggesting the initial issuance price of the stock.

The underwriter will reach out to potential investors to engage them in a process known as subscription – this sets out terms such as how many shares each investor is interested in buying, and when the date of the issuance will be. Once its been signed, the investor has agreed to terms and will make their payment.

After IPO, the company's shares are traded in an open market – known as the secondary market. The shares can be further sold by investors through their broker, without the company or underwriter’s involvement.

What does it mean when a company goes public?

When a company goes public, it means they become subject to specific reporting requirements and regulations from exchanges. A public company must have:

The regulations surrounding a public company also requires them to disclose all relevant financial information, as well as an analysis of their strengths, weaknesses and any future opportunities and challenges. This information is published in earnings reports, which companies publish quarterly or annually.

The IPO process is the steps a company has to take in order to sell new shares to the public for the first time. The whole process can take anywhere from six months to a year and can be delayed longer if there are any issues or if the firm decides not to list. 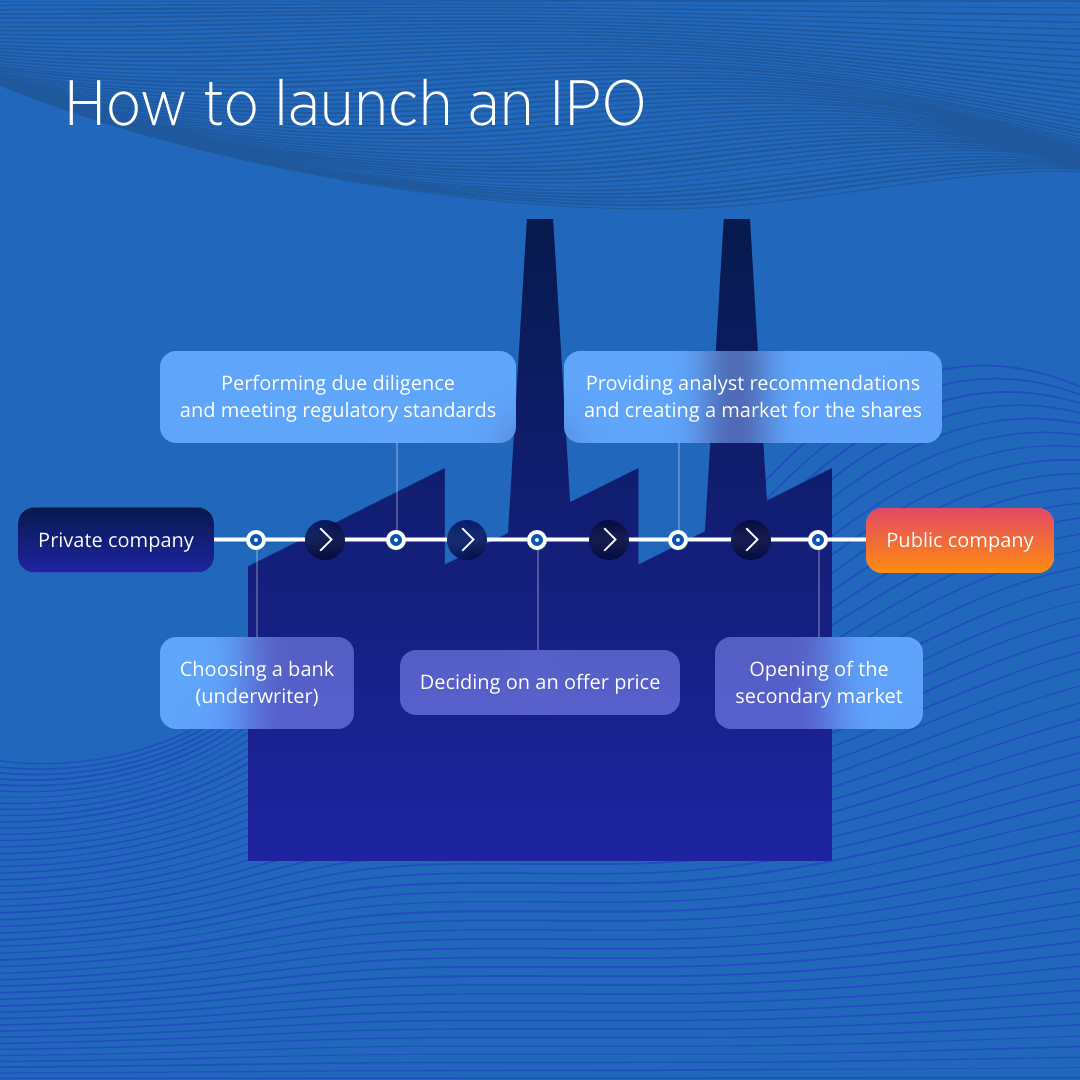 The entire process can be somewhat complex due to the number of legal requirements involved, but put simply, the steps are:

1. Choosing a bank (underwriter)
The first step for the company is to choose an investment bank that will advise them on the rest of the IPO process. Usually they’ll make a decision based on the bank’s reputation and previous distribution history – this is how many institutional and individual investors they can sell to


2. Performing due diligence and meeting regulatory standards
The underwriter will act as a broker between the company and investors, but they need to put all the legal arrangements in place before any shares can be sold. At this stage the underwriter will also begin the process of registering with the exchange and reaching out to investors with the prospectus of information about the company


3. Deciding on an offer price
Once the IPO has been approved by the exchange and an IPO date has been set, the company and underwriter will decide on the offer price and the number of shares that will be sold. The price will depend on the company’s capital raising goals and the condition of the market. IPOs are often under-priced initially to encourage investment, therefore share prices change so much on the first trading day. In an IPO, all the money raised from the newly-issued shares will go directly to the company – with a slice taken out for the underwriter’s commission

4. Providing analysts recommendations and creating a market for the shares

After the IPO, the underwriter will have to provide analysts recommendations and carry out stabilisation – this ensures there are no order imbalances by buying up any excess shares. There is only a short amount of time for the underwriter to do this, otherwise it becomes price manipulation

5. Opening of the secondary market

Once the IPO process comes to an end, the secondary market begins. This is when shares are traded freely between investors, without the company or underwriter’s involvement. It’s this secondary market that most retail investors and traders will have access to. So, when we talk about trading an IPO, it’s normally the secondary sale in question

Learn how the stock market works

What does an IPO price mean?

There are two IPO prices that it’s important for traders to know. The first, is the offering price, this is the price at which the company sells its shares to investors via its underwriter. The second, is the opening price, which is the price at which shares begin to trade in the public market – this is what most retail traders will refer to as the IPO price, as it’s the first price they can trade.

The difference between these two prices is of great important, as it indicates whether or not the market believes the IPO was over or undervalued and the direction the share price could move in the short-term.