When will Japan Act?

If the BOJ wants the Yen to weaken, they’ll need to do something soon!

The US Federal Reserve (FED) cut rates on Tuesday by 50bps to 1.25%.  After the GPIF was in the market during mid-February selling Yen and buying counter currencies, USD/JPY began to tank, and fear of the coronavirus began spreading around the globe.  USD/JPY came off from above 112.00 to todays levels near 106.50.  There is horizontal support near todays lows, but the bearish outside engulfing candle on the day (so far) isn’t showing much promise for the pair to bounce significantly.  Next support is a rising weekly trendline near 105.50 dating back to mid-2016. 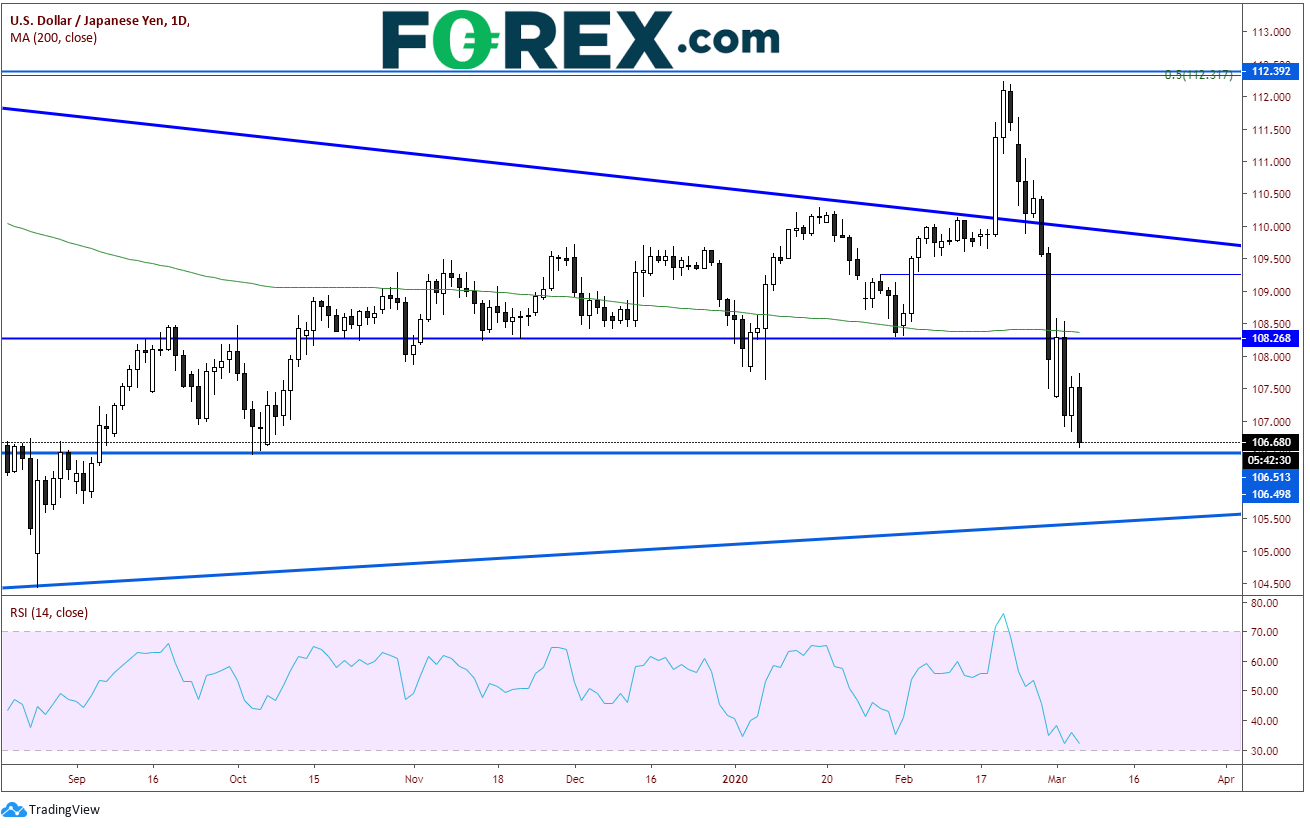 The Reserve Bank of Australia (RBA) also cut rates this week by 25bps, to an a new all-time low of 0.50%.  On a 240-minute timeframe, AUD/JPY broke lower out of the flag pattern dating back to mid-January and halted near the target of 70.00.  Price bounced to near 71.50, turned lower,  and formed a new pennant- like formation. Today, the pair broke lower again, moving towards target near 68.60.  AUD/JPY must first break the previous lows of 69.40 on its way to target. 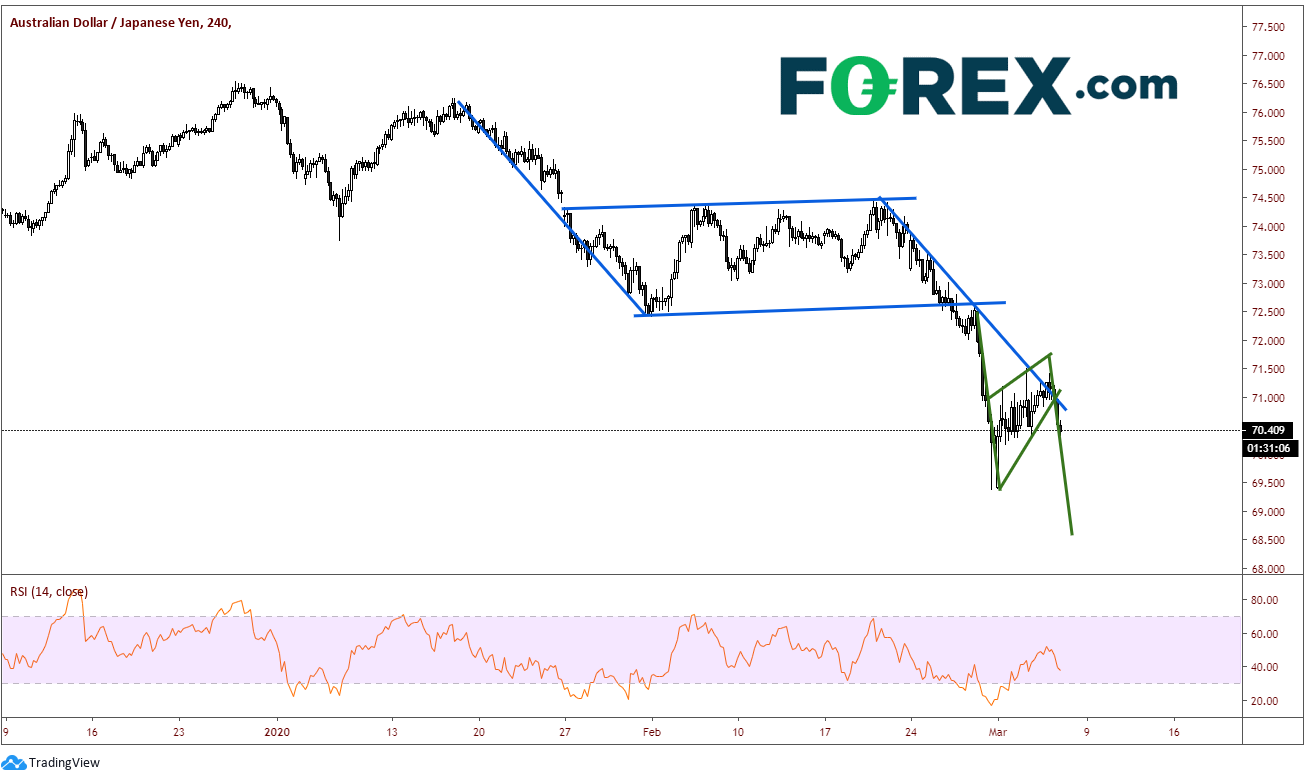 Finally, the Bank of Canada (BOC) cut rates yesterday by 50bps from 1.75% to 1.25%, and they still have additional room to move if needed.  CAD/JPY as been moving lower from its highs of 84.75 in mid-February (the same time USD/JPY began moving lower).  The pair has stalled at the 161.8% Fibonacci extension level from the lows on February 3rd to the highs on February 20th, neat 79.50.  If price breaks through here, it could move quickly to the lows of August 26th, 2019 near 78.50. First resistance is the lows from earlier this week near 80.00. 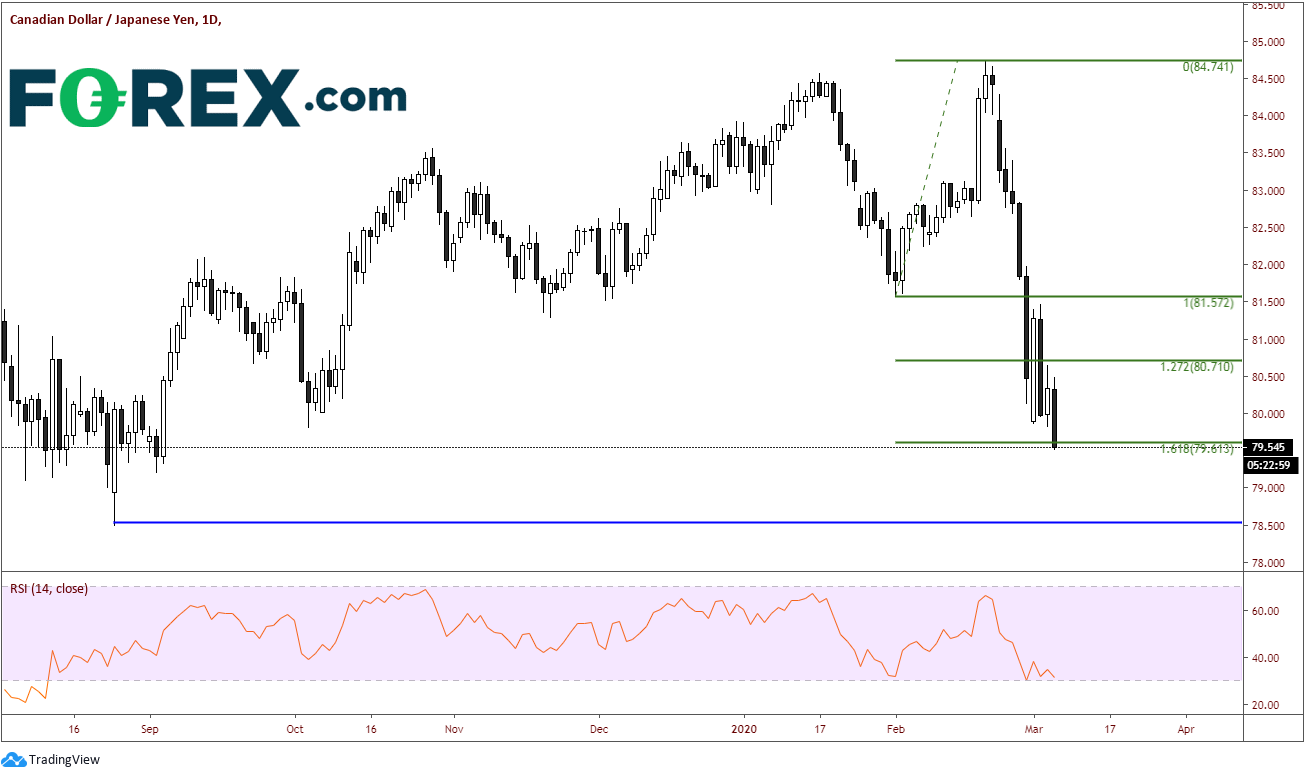 Although the Bank of Japan hasn’t showed signs they would provide more stimulus until their meeting in mid-March, there is always the chance they could intervene inter-meeting and provide support (as the Fed did).  However, one must wonder how much more they can do, as they have been supporting the economy for over 20 years. But, if the BOJ wants the Yen to weaken, they’ll need to do something soon!