As we noted in our FOMC meeting preview report, the market had a 75bps interest rate hike priced in for weeks, and not surprisingly, that’s exactly what the central bank delivered. Therefore, we haven’t seen much market movement from the interest rate decision itself, but there are still some key nuggets for traders in the accompanying monetary policy statement and Chairman Jerome Powell’s ongoing press conference.

There was only one substantive change to the FOMC’s monetary policy statement, but it was a doozy. Traders were on edge and ready to read between the proverbial lines for any hint of a downshift to slower interest rate hikes, but as it turns out, the central bank came out and stated it was considering such a move explicitly.

The FOMC added the following sentence to its monetary policy statement: “In determining the pace of future increases in the target range, the Committee will take into account the cumulative tightening of monetary policy, the lags with which monetary policy affects economic activity and inflation, and economic and financial developments.”

In other words, the Fed is finally acknowledging its aggressive tightening over the last six months will take time to influence the underlying economy and that it may soon shift toward rate hikes of 50bps, 25bps, or even outright pause interest rate increases to see how the economy develops. Furthermore, the fact that this comment was in the joint statement, rather than just noted in the press conference, suggests that it is close to a consensus view and less likely to be discarded regardless of how economic data comes out in the coming weeks. 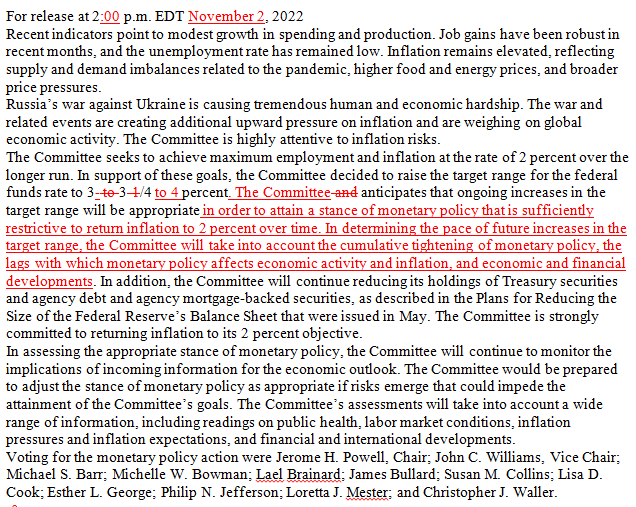 All the recent Fed meetings had featured the same dynamic where the statement came out as more hawkish than expected, then Fed Chairman Powell took the stage to soften the message and markets subsequently reversed, so traders were understandably wondering whether we would see the exact opposite scenario (dovish statement/hawkish Powell) emerge.

As we go to press, that appears to be the case, with Mr. Powell suggesting that even if the central bank slows its pace of rate hikes soon, the ultimate peak interest rate may well be higher than previously anticipated. Select headlines from the Chairman’s press conference follow (emphasis mine):

Once again, the key for traders is the destination (the ultimate peak in interest rates) rather than the specific journey (the amount and timing of each individual rate hike), and Powell’s comments suggest that destination may be a higher terminal rate (>5%?) than most were expecting earlier.

The initial market reaction underscores the dovish surprise in the monetary policy statement: The US dollar and Treasury yields fell across the curve, while stocks and gold spiked higher on the prospect of smaller rate hikes. However, as he has been wont to do of late, Powell reversed those moves with his press conference hinting at a higher terminal rate.

As we go to press, markets have entirely reversed that initial move, with yields and the US dollar now trading higher than pre-Fed levels, while US indices and gold are trading lower. Shortly, the focus will shift back to the economic data that will inform the Fed’s future monetary policy decisions, but if the recent disinflation shows any signs of pausing and the labor market keeps chugging along, we could see a continuation of the trends we’ve seen in recent months as traders price in a higher terminal rate from the Fed.