After last week’s central-bank-induced sell-off, European markets rebounded along with US futures to trade in the positive territory in the first half of Monday’s session. A rebound was always on the cards as the major indices reached oversold levels and hit some key technical levels. But heightened volatility could be with us as we head into the final weeks of the year.

Though there is some optimism in the air that US inflation has peaked, this alone might not be enough to keep investors optimistic for too long. We are continuing to see signs that world’s largest economy is heading towards a recession, as indicated for example by the latest S&P Global PMI data released on Friday. In case you missed it, the services PMI fell to 44.4 from 46.2, while the manufacturing PMI slipped to 46.2 from 47.7. A reading below 50.0 points to contraction, so these numbers were not good by any measure. A day earlier, we saw the Empire State and Philly Fed Manufacturing indices, as well as US retail sales and industrial production all disappoint expectations.

Investors are also worried about the Fed and ECB potentially over-tightening their respective monetary policies, which could tip the economy into a recession that might otherwise be avoided. The Fed has projected that interest rates will rise to around 5.00-5.25% before hiking is paused, while the ECB President Christine Lagarde warned that “we should expect to raise interest rates at a 50 basis-point pace for a period of time.”

As a result of these hawkish central banks and worries about the economy, the major indices such as the S&P plunged and broke some key technical levels last week. This means the technical path of least resistance is once again to the downside. 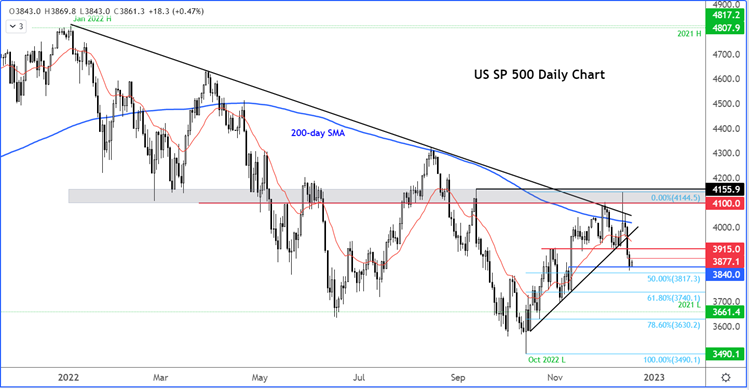 The S&P broke its bullish trend line after several attempts to break above the longer-term bearish trend and 200-day average failed. With key support around 3915 broken, the bears will remain happy for as long as the index holds below this level now. Thursday’s low at 3877 is an additional resistance level that needs to be monitored closely.

On the downside, the S&P has dropped to the level where we were expecting a bounce i.e., around 3840. This was the base of the previous breakout, which meant that the market was always going to respect this level. That’s proved to be the case as the S&P has bounced here. But the damage is already done. I wouldn’t be surprised if the S&P resumed lower.