Goldman Sachs Q1 preview: Where next for GS stock?

Goldman Sachs delivered record revenue and earnings in 2021 while delivering its highest return on equity this side of the 2008 financial crisis. This was aided by the unwinding of provisions set aside for potentially bad loans that had been set aside during the pandemic. Meanwhile, it reported record revenue from its Investment Banking arm that capitalised on a flurry of M&A activity and new listings during the year, as well as its Global Markets unit that reaped rewards trading the volatility seen in equities, fixed income, forex and commodities. Its Asset Management division and Consumer & Wealth Management arm also delivered all-time record revenues.

These will provide some very tough comparisons in 2022 as business normalises following the unprecedented boom seen last year. Wall Street forecasts Goldman Sachs will report a 33.4% drop in net revenue to $11.8 billion in the first quarter, while diluted EPS is set to more than halve to $8.95 from the $18.60 delivered the year before.

The only segment of the bank set to report a rise in revenue during the first quarter is the Consumer & Wealth Management arm, which is forecast to grow 16.2% year-on-year to $2.01 billion and pretax profits set to more than double. This is partly because it will not face the same tough comparisons from the year before, and driven by strong double-digit revenue growth from both the consumer banking and wealth management units.

Meanwhile, Investment Banking is forecast to see revenue plunge by around one-third in the first quarter, although the bank said its backlog had ‘increased significantly’ at the end of 2021 compared to a year earlier, suggesting the division could keep up some momentum this year. Elsewhere, Global Markets is set to report a 23.5% decline and Asset Management is expected to suffer the biggest decline in revenue of over 70%. All three divisions will experience a double-digit fall in pretax profits as a result.

Notably, Goldman Sachs announced it has completed its acquisition of NN Investment Partners for EUR1.7 billion on Monday, allowing it to start integrating the business into its European Asset Management division.

The S&P 500 has declined over 6% since the start of the year but US banks have suffered significantly steeper declines since the start of 2022, with Goldman Sachs having dropped over 18%. This year will be mixed for the industry. On the upside, soaring inflation, rising interest rates and the anticipation for strong loan growth and resilient levels of consumer spending all bode well for the industry and its profitability this year. But, in the meantime, costs are rising across the board and there remains significant fears over the economic outlook –from how the ongoing conflict in Ukraine will continue to impact global markets to the risk of a recession as the Federal Reserve hikes rates and begins quantitative tightening. Taking all of this into account, markets currently expect Goldman Sachs to report steep drops in revenue and earnings in 2022, with the consensus currently pointing toward a 20.2% fall in annual revenue and a 35% plunge in EPS.

Goldman Sachs saw its total operating expenses soar over 23% year-on-year in the fourth quarter of 2021 to $7.3 billion, which was much higher than expected as the bank continued to grapple with higher compensation for its staff following the record year for the bank, as well as increases in spending on technology and professional fees. Costs are expected to remain elevated at $7.4 billion in the first quarter, although that would be almost 22% less than the year before when expenses spiked thanks to a dramatic drop in compensation costs and lower transaction-based fees.

Where next for GS stock?

Goldman Sachs shares have been under pressure since early 2022, having fallen over 18% since the start of the year. The latest leg of the downtrend started late last month and although we saw it book its largest one-day gain in almost a month last Friday, this remains intact.

Shares hit their lowest level in over a year last week at $308.20, which also proved to be both a level of resistance and support in early 2021, and this should be treated as the initial floor for the stock going forward. If it fails to hold, then we may see the stock start to slide toward the next level of support at $286. The RSI remains in bearish territory and trading volumes in the last five days have returned to the 100-day average after dipping last month, reinforcing the view that the current trend is picking up momentum.

On the flip side, the 50-day sma (which remains below both the 100-day and 200-day moving averages) has acted as a ceiling for shares during the last three months, making $342 the first key upside target that needs to be recaptured. Beyond there, the stock can start to target the February high at $350 and then the 100-day sma at $362.

Notably, the 29 brokers that cover the stock believe Goldman Sachs can hit new all-time highs of $429 over the next 12 months, slightly above the last record high hit in November. 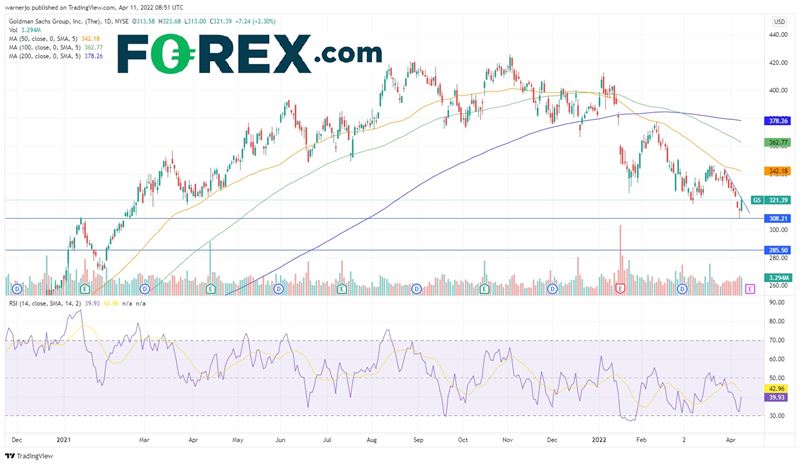 How to trade Goldman Sachs stock

You can trade Goldman Sachs shares with Forex.com in just four steps: