Snap Q1 preview: Where next for Snap stock?

When will Snap release Q1 earnings?

Snap, the owner of social media platform Snapchat, will release first quarter earnings after US markets close on Thursday April 21.

Snap is expected to have added 11.3 million Daily Active Users (DAUs) in the first quarter and to have ended the period with 330.3 million on its books. That is based on single-digit growth in North America and Europe and faster double-digit gains in the rest of the world.

Average Revenue Per User (ARPU) is expected to rise over 18% from last year to $3.24, driven by 30% lifts in North America and Europe and mild 3.7% growth in the rest of the world, where DAUs continue to grow at a much faster rate. While ARPU continues to grow at double-digit rates, it is expected to be held back throughout the first half of 2022 by the privacy changes introduced by Apple last year that has made it more difficult to target ads and track what users are doing.

As a result of both the continued growth in DAUs and ARPU, Wall Street forecasts Snap will report 39% year-on-year growth in revenue in the quarter to $1.07 billion. While strong, that would mark the slowest topline growth delivered in 18 months.

Adjusted Ebitda – Snap’s headline earnings measure – is forecast to turn to a $24.7 million profit in the quarter from the small $1.7 million loss booked the year before. Markets are expecting Snap to beat its own guidance considering it said it would be breakeven at the adjusted Ebitda level. Snap is expected to squeeze out adjusted EPS of just $0.01, although this will be better than the $0.19 loss seen last year.

Having delivered its first full year of positive free cashflow in 2021, Snap is expected to have generated $199.0 million of cash in the first quarter – the best figure on record.

The outlook for the second quarter will be crucial in deciding how markets react to the results this week. Currently, Wall Street believes Snap can add 13.4 million DAUs in the second quarter and report 28% year-on-year growth in revenue to $1.26 billion, while adjusted Ebitda is forecast to jump over 19% to $140.0 million.

Where next for Snap stock?

Snap shares have been under severe pressure since last October, when it first revealed that advertising revenue was being negatively impacted by Apple’s privacy changes. The result has seen Snap lose over 57% of its value in the last six months.

The current downtrend remains firmly intact, with the stock continuing to set lower highs and lower lows. If this remains the case, shares are likely to sink below the $27.67 bottom of the last leg downwards, but the 19-month low of $$24.32 hit in early February should be regarded as the floor for the stock.

The RSI remains in bearish territory and the shorter-term moving averages have continued to diverge away from the 200-day sma since early 2022 to suggest the stock could remain under pressure, but trading volumes have fallen in the last week with the five-day average volume at time coming in almost one-third below the 100-day average, suggesting the current downtrend could be running out of steam.

On the upside, shares have only briefly managed to move above the 50-day sma, which currently sits at $36, and this is once again acting as a ceiling for the stock. Snap needs to make a sustained move above this moving average to install confidence that it can nudge higher and break above the $38 mark in order to break the current downtrend. From there, it can look to recapture the 100-day sma at $39 and then the February-high of $42. Notably, the 44 brokers that cover the stock believe Snap shares can recover back toward $55.70 over the next 12 months, a level not seen since last November and broadly in-line with the 200-day sma which currently sits at $54. 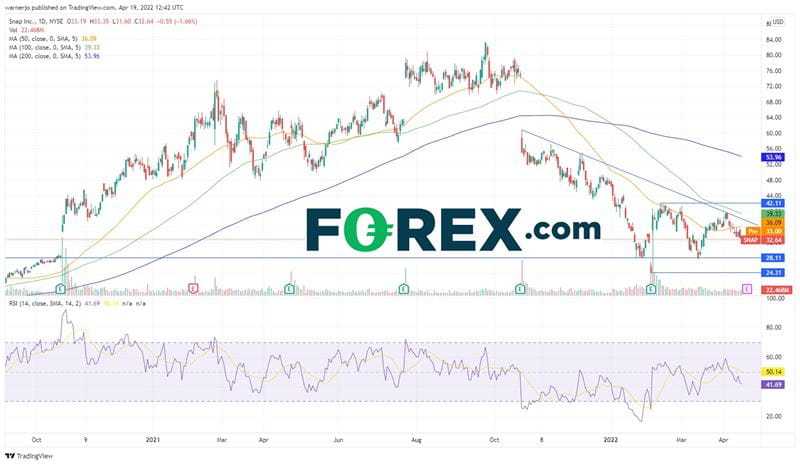 You can trade Snap shares with Forex.com in just four steps: