Tesla: Key Levels to Watch After a White-Knuckle Week

With a couple minutes left until the close, TSLA has spent the entire day consolidating within the roughly 5% range it carved out during the first hour of trade.

In any other week, this sentence wouldn’t be particularly noteworthy. After all, Elon Musk’s newly-profitable electronic car company has always traded more on sentiment and expectations than traditional fundamental measures, leading to its relatively volatile stock price. However, today’s price action is remarkable for a different reason: TSLA has seen a surprisingly small range today relative to this week’s incredible volatility.

As we noted earlier this week, Tesla’s surge evoked a number of astonishing statistics, but the fact that a company with a nearly $100B market capitalization nearly doubled in less than two weeks, as we saw at Tuesday’s intraday peak, may take the cake. Looking at the chart below, the bloom came off the bullish rose in the latter half of the week, with the stock falling from nearly $1,000 down to its current level in the mid-$700s: 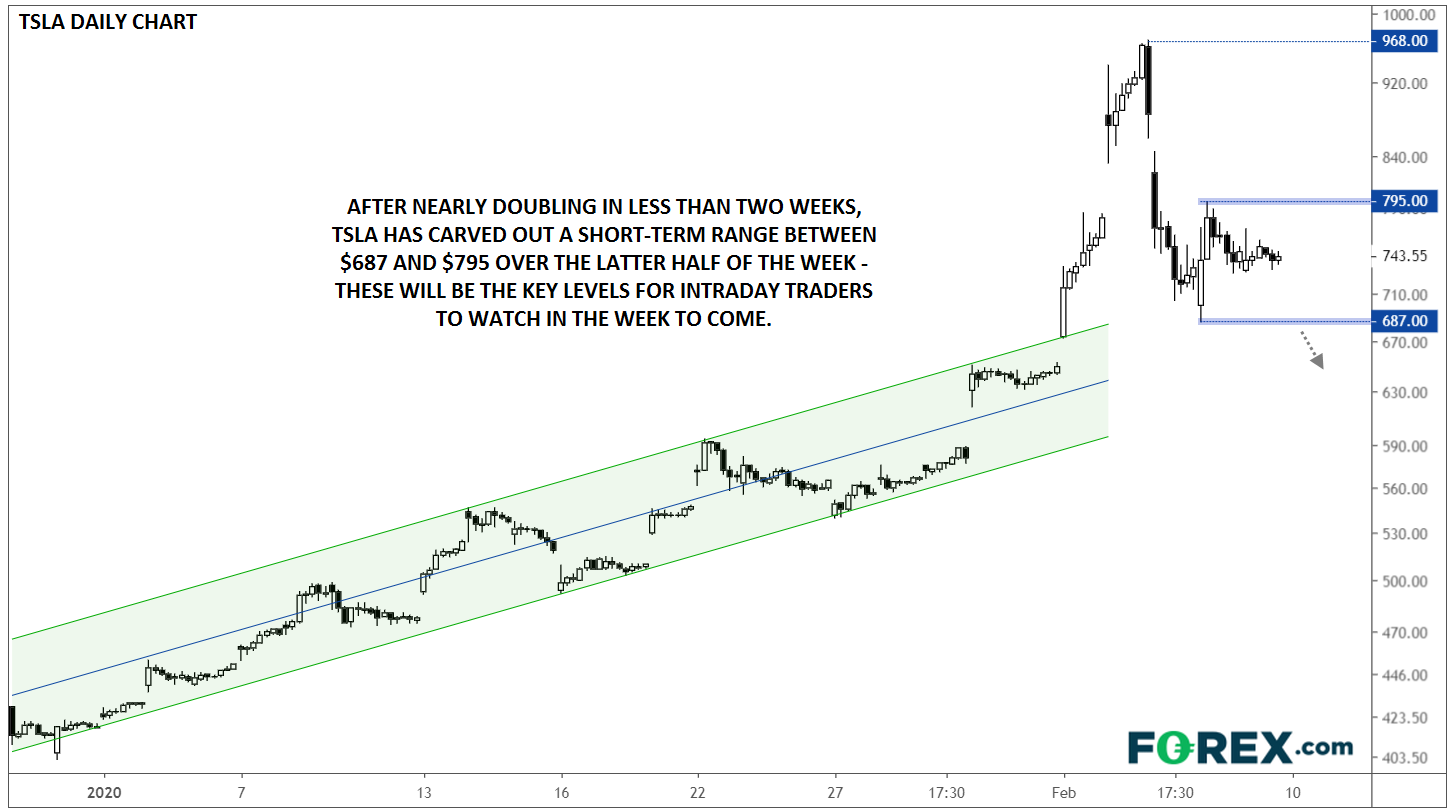 So what’s the outlook for arguably the biggest short squeeze of all time heading into next week?

As many traders learned this week, it’s impossible to say definitively, but the recent drop does mark a change in the character of stock, which had previously not seen even a 5% peak-to-trough drawdown on a closing basis in nearly two months. For that reason alone, it’s reasonable to assume that the proverbial bullish fever has broken and that the odds favor a continued pullback toward $500-$600 in the coming week. More aggressive bears may want to consider short positions near current levels, while those who are less convinced may prefer to wait for a move below Wednesday’s low at $687 to signal that a deeper pullback is at hand.

That said, the fact that Tesla has held up relatively well over the past couple of days leaves the door open for another leg higher. On a short-term basis, bullish traders will be watching for a potential break above Thursday’s high at $795 to signal that the buyers are attempting a last gasp push higher, with the potential to retest Tuesday’s high at $968 or even break into 4-digit territory above $1,000 as the final shorts are squeezed.

One way or another, Tesla’s massive rally over the previous week (and previous months) should offer trading opportunities for nimble intraday traders – just make sure you’re not asleep at the wheel!