A complete guide to AMC stock

AMC Entertainment shares trade on the New York Stock Exchange under the ticker AMC. Despite a tumultuous 2020, shares of AMC were up 347% from January 2021 to early May.

At the start of January 2021, AMC shares were worth a little more than $2 each. But so-called ‘meme investors’ – those behind the Reddit surge in GameStop shares – drove the price of AMC stock up to nearly $20 per share by the end of the month. The goal of this move was to create a short squeeze on Wall Street short-sellers.

AMC’s share price soon corrected and rapidly fell to just over $5. Although the volume of short sales rose about 50% in March to 73.8 million shares according to Bloomberg, AMC shares continued to trade between $7.50 and $15 per share – higher than they were pre-Reddit rally.

AMC shares have also received a boost off the back of optimism surrounding the return to theatres amid the vaccine rollout. As of May 10 2021, AMC’s market capitalisation was approximately $4.28 billion.

Want to trade AMC shares? Open an account with FOREX.com today or practise trading in a demo account.

What does AMC Entertainment do?

AMC Entertainment Holdings – previously known as American Multi-Cinema – is an American move chain, which holds the largest share of the cinema market both in the US and worldwide.

Following its acquisitions of Odeon Cinemas, UCI Cinemas and Carmike, AMC Entertainment operates with approximately 1004 theatres and over 11,041 screens in 15 countries – including the US, most of Europe and Saudi Arabia. The company is licensed to run films from production companies and independent distributors.

How does AMC Entertainment make money?

AMC Entertainment makes money through the admission costs it charges for each film. The rest of its revenue is comprised of food and beverage sales to visitors. In March 2021, AMC’s revenue was divided as follows:

Despite the growing concern that home-streaming services – such as Netflix and Disney Plus – would start to eat into cinema revenues, before Covid-19 hit, the market was still worth over $1.2 billion a year.

This dramatic decrease from previous years was caused by the closure of cinemas amid the COVID-19 pandemic. Attendance at AMC Theatres fell from over 356 million in 2019 to just over 75 million in 2020. The company reported annual revenues of $1.24 billion, which was down 77% from the year before.

The expenses involved in servicing its debt have also contributed to the company losing money in three of the past four years. 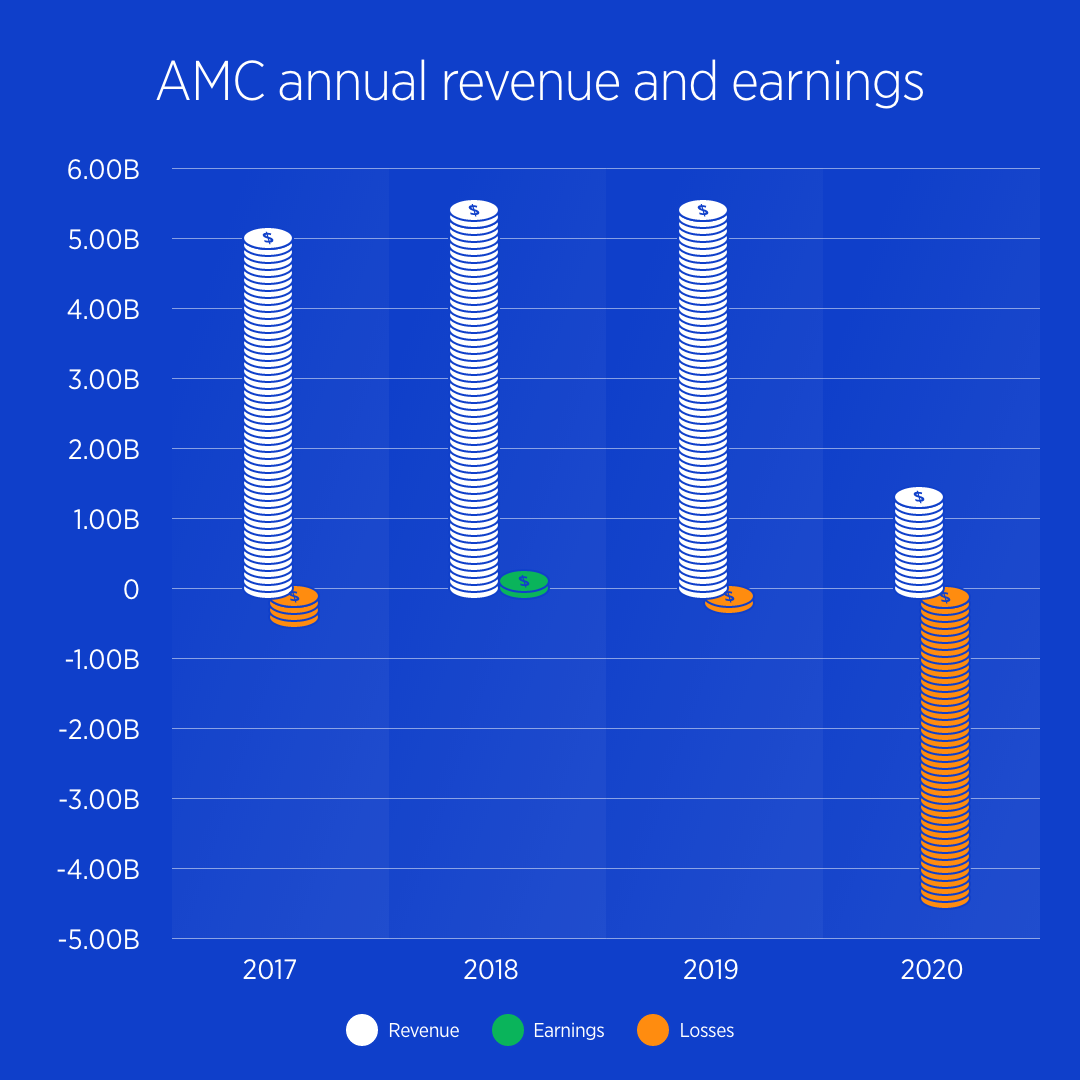 AMC has avoided bankruptcy a number of times throughout 2020 by raising money from Wall Street. The company said it now has more than $1 billion in cash on hand. However, AMC also announced it would issue 500 million new shares – provided existing shareholders agree. Although in April it was stated this would not happen in 2021 rather over the next few years.

Learn how to read a company’s earnings report.

What is AMC Entertainment's business strategy?

CEO Adam Aron announced long-term plans to improve the company’s growth following the pandemic. He stated that they intended not only to return to the position the company held before the pandemic but to continue expanding.

The only strategy AMC has hinted at is to harness film exclusivity in its theatres and push users toward its video-on-demand service. However, unless AMC cuts costs somewhere, it’s unlikely they’ll be profitable anytime soon due to its $5 billion debt balance.

Not only are moviegoers now accustomed to online streaming after a year of stay-at-home measures, but the expensive costs of cinema tickets and food could put a dampener on enthusiasm to return to the theatres. Plus, with competitors such as HBO, Disney Plus and Netflix, AMC’s video streaming remains a relative unknown.

Part of AMC’s future could be an acquisition by a larger firm. Amazon expressed interest in acquiring AMC as part of its shift toward the film industry and expanding its subscription service. However, the company’s debt pile made it an unappealing deal.

From 2012 to 2018, Wanda Group owned a majority stake in AMC Entertainment. Then in 2018, Silver Lake Partners made a $600 million investment in the company, but Wanda Group retained control.

Due to the company’s difficulties during the pandemic, Wanda’s ownership became diluted by AMC Entertainment’s financing needs.

Silver Lake converted its $600 million debt holding to equity after a short squeeze drove the cinema giant’s stock up.

Board of directors of AMC Entertainment

The executive leadership of AMC Entertainment is:

You can trade AMC shares with FOREX.com in just four steps: