Asia open: The USD is broadly weaker ahead of US CPI 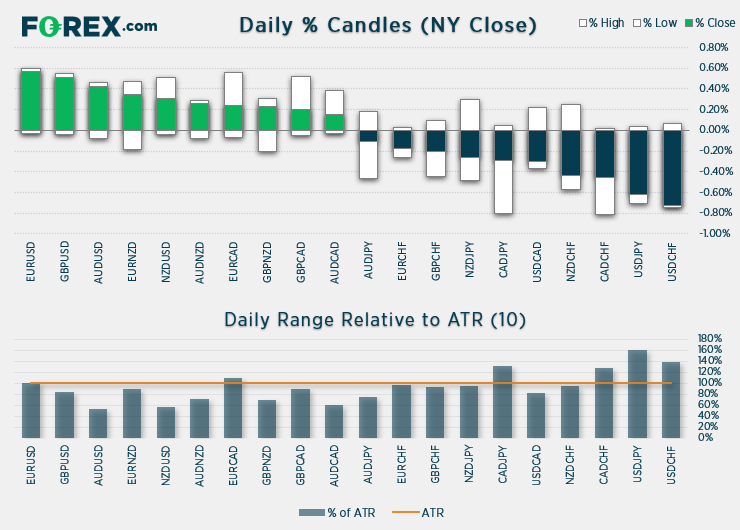 The US dollar was the weakest major currency overnight, falling broadly lower against its peers and placed EUR/USD as the biggest gainer and USD/CHF as the weakest pair of the session.

EUR/USD now sits at 6-day high and closed above the 50 and 100-day eMA. Friday’s bullish engulfing candle (which formed part of a bullish 2-bar reversal) suggests a corrective swing low has formed and bullish momentum has now realigned itself with the longer-term bullish trend. Yesterday’s bullish candle also closed convincingly above its retracement line. GBP/CHF has pulled back slightly from last week’s high, but not at a rate of momentum which concerns our core bullish view. We remain bullish above the 1.2205 – 1.2260 support zone on the daily chart, so any low volatility retracements towards this support level may be considered for bulls to buy dips. Alternatively they could wait for a break above last week’s high at 1.2373 before assuming bullish continuation. The British pound closed to its highest level since April 2018 overnight, taking advantage of the back of a weaker US dollar.

USD/JPY fell to 7-day low after printing two bearish hammers on Friday and Monday. Given it is now on track for a bearish engulfing week (and having seen a clear rejection of the 50-week eMA at last week’s high) we’re now exploring its potential to provide a deeper retracement than originally envisaged. A stochastic sell-signal has appeared on the daily charts and the next support level for bears to conquer is around eh 104.40 high. A break beneath here 103.33 and 102.60 lows into focus for bears.

The Australian dollar rose to a 9-day high after printing a bullish closing Marabuzo candle and stochastic buy signal on Monday at its 50-day eMA. Momentum appears favourable for bullish setups on intraday timeframes, although note should be taken of resistance levels (targets) nearby at 0.7764 and 0.7820.

US jobs layoffs eased in December

US job openings increased slightly in December whilst layoffs eased, which suggests weak employment was more likely to due companies holding back from hiring in the midst of the pandemic. It therefor begs the question as to whether the employment market can regain speed faster than initially feared, but of course the strength of the employment market will likely be hinged upon the efficiency of the vaccine rollout and delivery of Biden’s stimulus package.

US indices remained anchored around all-time highs during a relatively low-volatility session. Bears appear hesitant to jump in and bulls seem reluctant to sell. The S&P 500 was essentially flat by the close (+0.05%) whilst the Dow Jones Industrial Average and Nadaq-100 etched up gains of 0.1% and 0.13%.

The ASX 200 failed to break above 6,893.70 resistance yesterday and produced a bearish engulfing candle at its multi-month highs. Technically, the minor reversal is no major surprise, given the 6,894 region has proven to be a pivotal level historically by acting as resistance in November 2019 and support in February 2020. For now, price action may appeal to mean-reversion traders who seek to sell into the highs but, further out, we are on guard for a bullish breakout. It is rare to see breakouts successfully clear an important level on its first attempt anyway, so we’ll give it time.

Gold prices rose for a third consecutive session above 1,800, yet beyond that it remains difficult to become technically excited with a bullish case. The daily chart produced a bearish hammer yet price action is now trapped between the 100 and 200-day eMA. Until the picture becomes clearer on the daily chart gold is perhaps another market better suited to intraday holding times, as there are too many congestion zones and levels of S/R to scupper a directional move in either direction.

Copper prices have provided much cleaner price action for traders which sit just below an 8-year high. A strong bullish trend has formed on the daily chart and momentum suggests a breakout to new highs could be on the cards. Support was found at the 50-day eMA last week with a bullish engulfing candle and bullish hammer showing strong demand around 3.50.

WTI futures produced a seventh consecutive bullish session and closed to a fresh 52-week high. Although we remain sceptical of being too bullish around current levels, given a cluster of likely resistance around 59.77, 60.00 (round number) and 61.60. Inventory data from the American Petroleum Institute (API) later today will be a key data point for price action over the near-term. 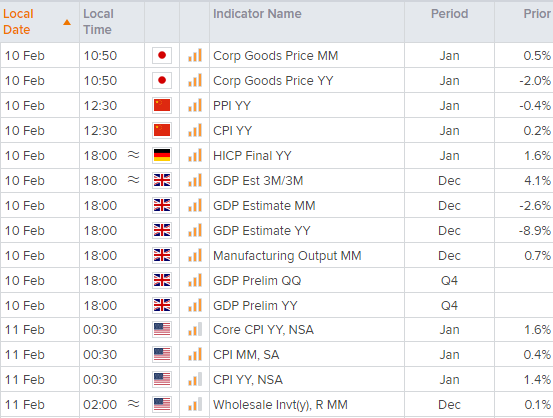 Inflation data from US overnight is the main economic calendar event. Whilst it will unlikely force the fed to act (as they are now willing to let inflation rise above 2% for an undisclosed amount of time) it could see expectations for the fed to change policy sooner than 2023 or 2024.