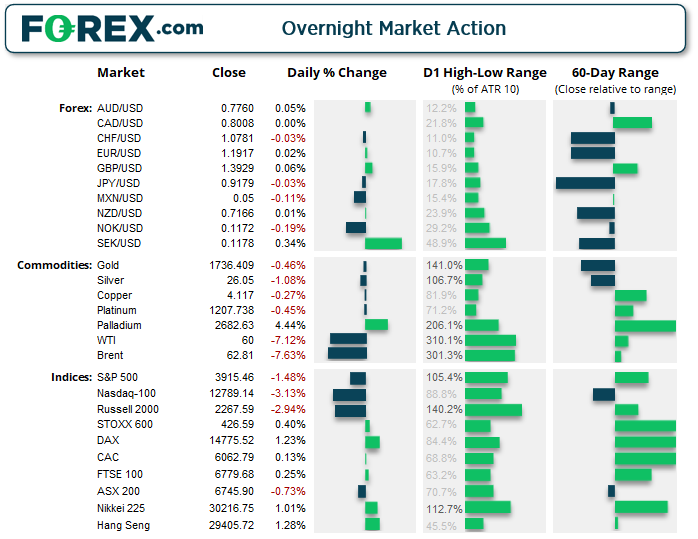 
Indices fall under the weight of higher yields

The US 30-year yield rose to its highest level since July 2019 at 2.53%, whilst the 10-year hit 1.75%, its higher level since December 2020. Market chatter has continued float the idea of it rising to 2% easier than some expect, and its recent trajectory suggest this could be the case.

The Nasdaq 100 led Wall Street lower, which has generally been the case over recent times when yields rise aggressively. Having shed -3.1% during its most bearish session in three weeks, it is now considering a break below 12,755 support.

The Russell 2,000 fell -2.9% and produced a second volatile bearish engulfing candle over three sessions. Closing beneath its 10-day eMA, it did manage to find support at its 20-day eMA, but the daily candles could suggest this correction isn’t over just yet.

After just one session above 33k initially printing another record high, the Dow Jones reversed its course and closed the session slightly lower with a bearish pinbar. A break below 32,781 warns of a correction.

The VIX (Volatility Index) rose by 2.5 points to a four-day high of 21.7 after (ironically) opening at its lowest level since January 2020.


BOE stick to their dovish guns

GBP/USD once again rolled over at 1.4000 as the Bank of England (BOE) kept policy unchanged and reiterated their dovish stance. And the British pound also had the stronger dollar to contend with. The base rate remains at 0.1% and their bond purchases at 875 billion pounds, which is no surprise, but traders were seemingly positioned for a slightly less dovish meeting given concerns over rising inflation to remain elevated among some voting members. You can read a complete review in Joe Perry’s analysis: BOE hedges comments from January’s meeting: GBP/USD

The dollar dominates the session for forex traders:

The US dollar index (DXY) recouped most of Wednesday’s post-FOMC losses and held above the 100-day eMA and 91.94 support levels. And if yields continue to rise, we expect the dollar to remain bid (supported).

A strong bearish trend has developed on NZD/CAD’s daily chart since it topped out just above 0.9300. After months of underperformance, the Canadian dollar is now the favoured commodity FX major relative to AUD and NZD. 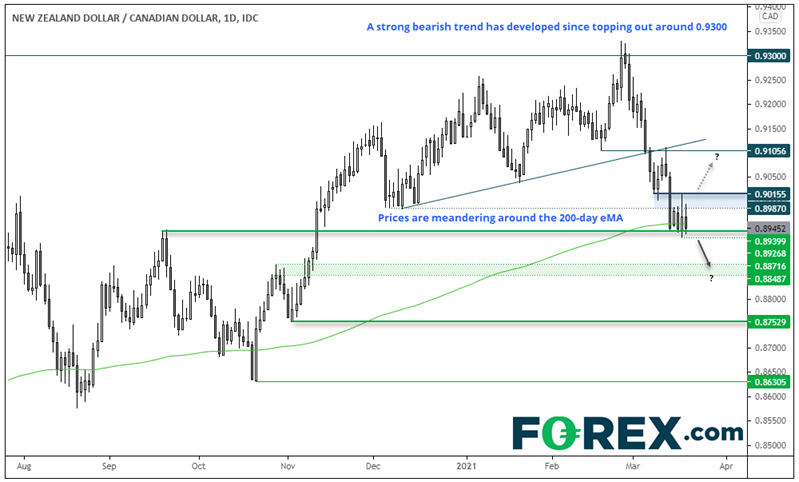 Prices are meandering around the 200-day eMA, and a trading range has been carved out around the 0.9000. But if prices break beneath this week’s low, we could assume the bears are back in control. Of course a caveat here is if oil prices continue to fall (CAD weakness) and yields also fall, which could help NZD/CAD retrace higher.

It was quite the selloff for oil prices overnight, with WTI and brent falling over 7% and 8% respectively. And having closed lower for its fifth consecutive day with increasingly bearish momentum, we suspect could be headed for a sixth. A rise in COVID-19 cases across Europe at a time when over a dozen countries have suspended the use the AstraZeneca’s vaccine has spooked oil bulls at the multi-month highs (although reports just in say Germany and France are to resume its use). Regardless, oil prices were arguably I need of a correction given the effective straight-line rally it has enjoyed over the past nine months anyway.

Gold produced a bearish outside candle below 1760 resistance after stopping just shy of our bullish target. Yet we have been on guard for a swing high around current levels, given the significance of the 1760/64 resistance zone. If bearish momentum resumes the next major support level for bears to target is around 1700. 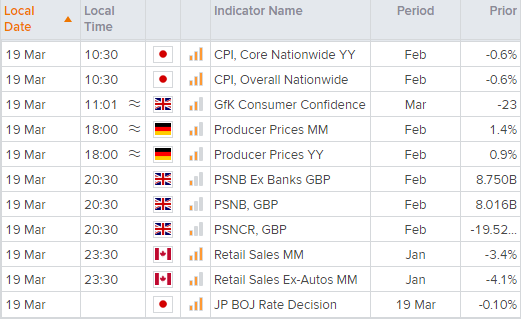 
The conclusion of the Bank of Japan’s meeting (BOJ) is the main event today. They will have concluded their formal review of their monetary policy framework, which currently consists of negative interest rates, yield curve control and asset purchases. According to some reports, they are considering widening the range their JGB’s (Japanese government bonds) to allow yields to move +/- 0.25% around their target (currently at +/- 0.2%) with the intention of steepening the yield curve.

Retail sales for Canada are the main economic event in tonight’s US session, although we suspect yields may continue to dominate sentiment as we head into the weekend. Although a stronger-than expected print could help push NZD/CAD lower.