The year 2021 is ending with many central banks reeling in their Quantitative Easing programs. The FOMC began tapering bond purchases in November and looks to finish by March. The BOE hiked to 25bps and will let its bond buying program expire at the end of the year. The ECB will let the Pandemic Emergency Purchase Program expire in March, however, won’t end purchases under its Asset Purchase Program until at least September 2022. As for the BOJ, the central bank won’t be ending its monetary stimulus program any time soon. Perhaps it may be able to take its foot off the pedal in 2022. Barring any new variants of the coronavirus or other “black swan” events, many central banks will be tightening policy over the course of 2022.

US Federal Reserve (The Fed)

The FOMC will have its work cut out for it in 2022. Towards the end of 2021, Fed Chairman Jerome Powell stated that it was time to retire the word tapering. This meant that he flipped from dovish to hawkish. With that said, the Fed will be ending its tapering of bond purchases during March 2022. In addition, the Fed forecasted that it would raise rates 3 times in 2022 and 3 times in 2023! Now, the question is: When will the Fed embark on reducing its balance sheet? Headline inflation is near 7%, although the Fed sees pulling back to 2.6% in 2022 and 2.3% in 2023. However, can inflation get as low as the Fed’s target of 2% by the end of the year? Most likely not. Watch for the Fed to embark on a new round of rate hikes in the second quarter of 2022.

Newly elected Prime Minister Fumio Kishida recently announced a new federal stimulus package worth US $490 billion, including direct payments. In addition, the Bank of Japan said at its December meeting that it would extend emergency funding to small companies by 6 months. However, it will also stop buying corporate bonds at the end of this fiscal year (March 2022). Although it’s just a drop in bucket, it is some form of tapering. Due to a rapid increase in vaccinations, the BOJ revised their growth forecast for FY 2022 to 2.9% from 2.7%. Full year inflation expectations are for 0.9%. Note that the BOJ targets 2% inflation. Therefore, the BOJ is likely to continue to offer small courtesies of tapering throughout 2022. Once inflation reaches 2%, the BOJ can stop the yield curve control program, which targets 0% on the 10-year JGB. After that, it can consider raising rates from -0.1%. This probably won’t happen in 2022. Note that inflation has only been positive for the last few months. Before then, it was negative for a year!

Everything you need to know about the Bank of Japan

With negative rates and a large quantitative easing program, USD/JPY doesn’t respond much to decisions by the BOJ, but rather, the pair is higher correlated with the US 10-year yield. The correlation coefficient on a weekly timeframe is +0.80. A reading of +0.80 or above is considered a strong correlation between the 2 assets. Therefore, if US rates begin to rise, so should USD/JPY. In early 2021, USD/JPY broke higher out of a descending wedge near 103.55 dating back to the February 2020 highs of 122.12. The pair retraced the entire wedge and finally broke above those previous highs during the week of October 4th, 2021. In doing so, the USD/JPY tested resistance at 115.52 and pulled back to the 112.12 support level in a flag formation. If the pair continues higher, the target of a flag patten in the length of the flagpole added to the breakout point, which in this case would be near 118.00. However, first the pair must pass through resistance at the top trendline of the flag near 114.00 and the recent highs at 115.52. The previous high resistance and 50% retracement from the September 2021 low to the November 2021 high now acts as the first level of support, which is 112.12. The 61.8% Fibonacci retracement from the same timeframe is just below at 111.56 and then an upward sloping trendline from April 2021 crosses near 110.00. 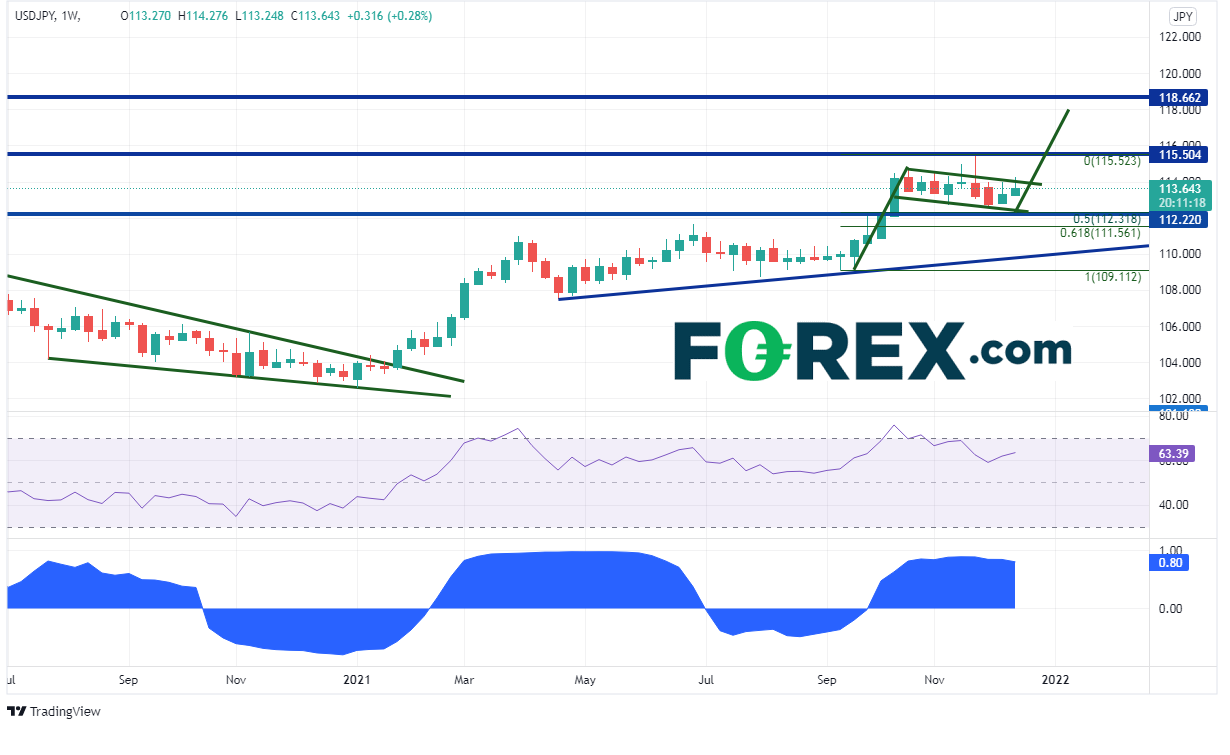 The Bank of England surprised markets and hiked rates to 0.25% at its December meeting. It will be wrapping up their Quantitative Program of $895 billion Pounds at the end of 2021. Markets are expecting the central bank to hike rates again as soon as the February meeting! As of writing on December 17th, markets are pricing in rate hikes to 0.5% by March and 1% by September. Recall that the BOE said it will stop reinvesting proceeds from bond purchases once rates reach 0.5%. As with other central banks, the timing of the pace of rate hikes will also be depend on the Omicron variant of the coronavirus, which the BOE says may hurt near term growth. Currently, the BOE expects inflation to rise peak at 6% in April. In addition, the central bank expected the Unemployment Rate to fall to 4% in 2022. The October reading was 4.2%.

This should provide a boost to the GBP/USD heading into February’s meeting. Although price has been trending lower in the latter half 2021, the pair may be ready for a bounce as UK interest rates begin to rise, most likely quicker than US interest rates. If price does indeed bounce, horizontal resistance is at 1.3411, 1.3572 and 1.3844, ahead of the psychological round number resistance level at 1.4000. However, if markets feel that the US will begin hiking rates sooner than anticipated, GBP/USD may continue lower. First support is at the 38.2% Fibonacci retracement level from the March 2020 low to the February 2021 highs near 1.3166 (the 200-Week Moving Average is also 1.3144), ahead of the psychological round number support level at 1.3000. The 50% retracement level from the previously mentioned timeframe is 1.2834. 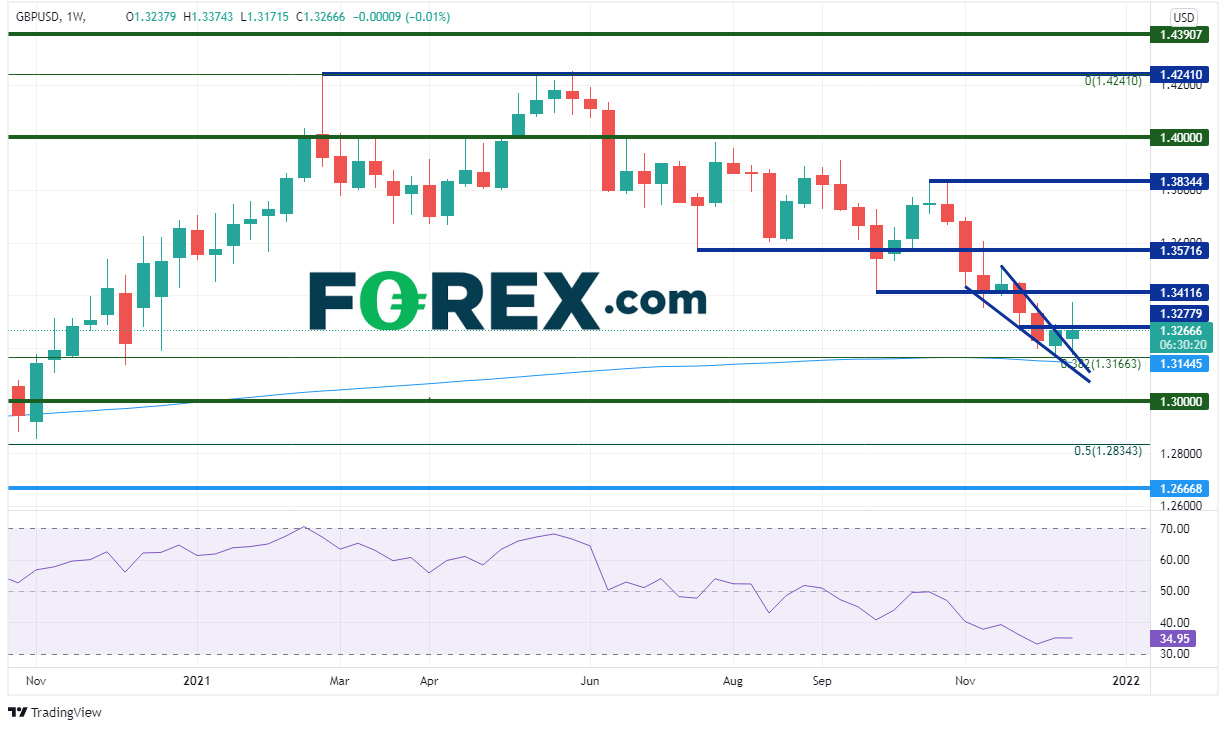 The ECB will end the Pandemic Emergency Purchase Program (PEPP) in March 2022, as scheduled. However, what’s next? Under the ongoing Asset Purchase Program (APP), Christine Lagarde said the ECB will purchase EUR40 billion of bonds in Q2, EUR30 billion in Q3, and maintain the current EUR20 billion level until deemed appropriate to discontinue. But what will it do until then? The ECB expects inflation to begin easing towards the end of 2022 and finish the year near 2.3%. In 2022 and 2023 it expects inflation to be 1.8%. Will the ECB raise rates in 2022? Christine Lagarde doesn’t think so under current conditions, but we think there is a strong chance the ECB will hike by the end of 2022.

Everything you need to know about the European Central Bank

EUR/USD has been moving lower in an orderly channel since May 2021 after breaking lower out of an ascending wedge near 1.2250. The pair broke below the channel during the week of November 15th, 2021, to a recent low of 1.1186. This level is just below the 61.8% Fibonacci retracement level from the March 2020 low to the June 2021 high, at 1.1292. EUR/USD has since traded sideways back into the channel. 1.1490 has acted as key resistance and support over the last 2 years and remains so now, acting as resistance at the top trendline of the downward sloping channel. The 200-Week Moving Average is just above at 1.1534 and horizontal resistance is above at 1.1683. If EUR/USD falls below the bottom trendline of the channel once again, long-term horizontal support is at 1.1144 and 1.1020. Below opens the door for a drop back to the March 2020 lows near 1.0636. 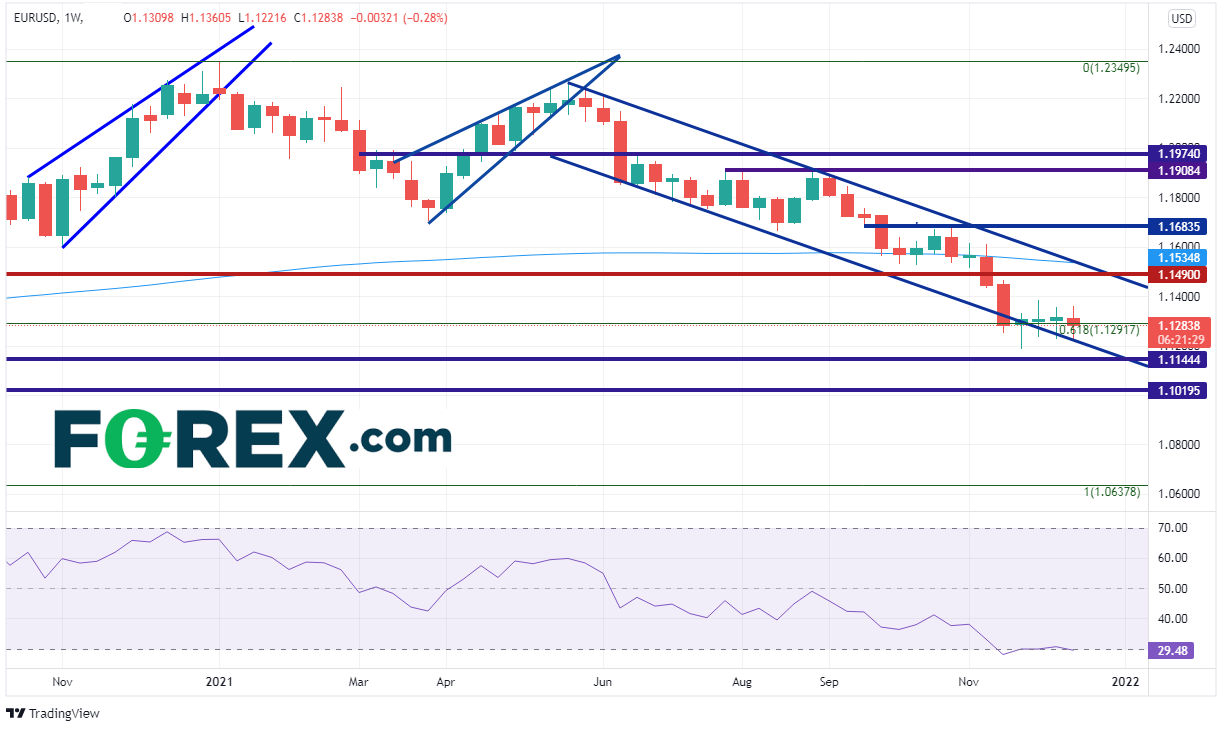 As the outlook looks right now, interest rate increases will be necessary for the both the BOE and the US Federal Reserve. If inflation continues to rise in Europe and the coronavirus doesn’t have an impact on growth, there may be a rate increase at the end of 2022. As for the BOJ, small amounts of tapering are likely to be symbolic throughout 2022, but there most likely won’t be a rise hike for a long time.