Without a doubt, it is all about the US Federal Reserve today. A fourth consecutive 75 basis point hike is not going to surprise anyone, but the key question is whether the Fed will signal that it is ready to pivot to a less hawkish stance in its December and subsequent meetings. Stocks and futures, dollar, bonds and gold prices are all in consolidation mode ahead of the big event. Halloween might be over, but the Fed could still scare the markets if recent expectations are not met, as the major indices test some key technical levels.

Before discussing the Fed in greater detail, let’s have a quick look at the chart of the Russell, which has enjoyed a sizeable rally off its lows in October, along with the other US indices: 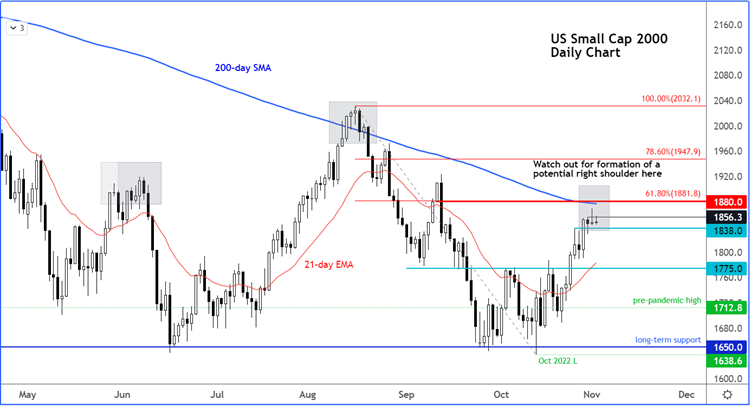 The small-cap index is potentially at a turning point now that it has arrived to test a band of resistance in the 1850 to 1900 area. Here, we have the potential right shoulder of a head and shoulders reversal pattern converging with the 200-day average and 61.8% Fibonacci retracement level against the August high. So, it is a key area for the bears to defend, if this is still a bear market.

Will the Fed Pivot?

In recent times, equities have enjoyed a bit of relief. Stock investors have started to price in a pivot to a more dovish stance from the Fed. If the Fed decides to pivot to a more dovish stance, this should provide at least a short-term boost to stocks and reduce the appeal of the US dollar against currencies where the central bank is having a hard time controlling inflation.

However, I very much doubt the Fed will want to ease off the gas just yet, with inflation so high and employment remaining quite strong, as indicated by that strong ADP payrolls report earlier (239K vs. 178K eyed). A 75-basis point rate increase is thus a more likely outcome in the conclusion of today’s meeting, rather than a downshift to 50 bps. This would raise interest rates to a range of 3.75 to 4%, the highest level since 2008. The decision will be announced at 18:00 GMT (14:00 ET) and Powell will hold a press conference 30 minutes later – but there won’t be any fresh forecasts at this meeting.

All about December meeting

As mentioned, a 75-bps hike shouldn’t surprise many people. It is all about whether the Fed will signal that it is ready to pivot to a less hawkish stance in its December and subsequent meetings. In the event the central bank appears more hawkish than some hope, this could put renewed downward pressure on stocks and gold, and upward pressure on the dollar and bond yields.

Fed Chair Jay Powell is likely to re-iterate that the FOMC remains resolute in the inflation fight. It is what he says about December that will be even more important given that the markets are split between another big 75 basis point move or a shift to 50 basis points. Rate cuts are seen coming around the end of 2023.

Beyond the short-term impact of today’s policy announcement, investors will be keen to figure out whether, by going at a slower pace in the future meetings, this might mean more rate hikes and thus a higher terminal rate, than if the Fed were to continue front-loading the rate increases. So, the terminal rate is going to be as, if not more, an important consideration for the markets as the decision to downshift in December.

So, today’s decision by the Fed should move the markets sharply. Given that the markets have already been moving higher in October, a less hawkish Fed might not be able to support the recovery significantly further. Thus, the bigger risk in my view is that the Fe might disappoint those looking for a downshift and create a fresh wave of risk selling. Therefore, if you are bullish or long, take extra care here. If you are bearish then there might be tactical shorting opportunities to take advantage of again, especially if the Fed delivers a hawkish surprise today.