In this article, we discuss the current economic and monetary policy environment. What does it all mean for the markets and where are stocks, commodities and currencies headed from here?

As we start the second half of the year, sentiment towards stocks, cryptos and many other risk-sensitive assets continue to remain negative. There are many reasons for this, but it all boils down to high inflation around the world, which is hurting economic activity and causing major central banks to proceed with aggressive rate hikes at the same time. The latest CPI data from Eurozone shows inflation is at a record high, while in the UK and US consumer prices have repeatedly hit multi-decade highs. Globally, prices of everyday items such as bread, cereals and meat, as well as energy, have been on the rise amid ongoing supply troubles due, in part, to the Ukraine-Russia war.The combination of weak growth and surging inflation around the world has raised concerns over stagflation while also unnerving bond markets. Yields on debts of peripheral Eurozone countries in particular is an area of concern, although the ECB has tried to address the problem. It remains to be seen whether they will be successful now that the central bank has ended bond buying and promised to raise interest rates starting in July.

This chart tells you all you need to know why low-div-yielding growth stocks in particular have been declining for months now: 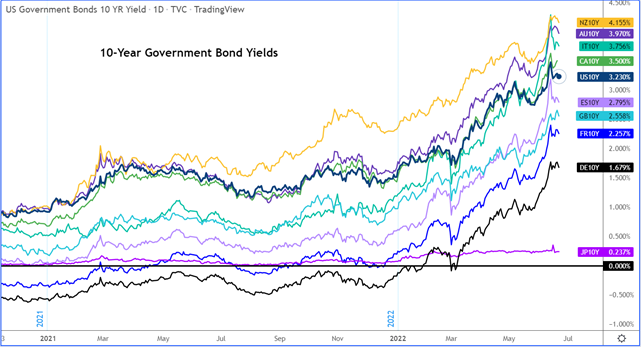 In an environment of rising interest rates, it is difficult to see why yields would stop rising until the hiking cycle ends or inflation peaks, or we are very close to that time. Recent macro data suggests we are not anywhere close to that time. As such, I continue to expect more pain for bond and stock prices.

Commodities such as Iron ore, copper and -- to a lesser degree -- crude oil have fallen sharply in recent weeks and more losses could be on the way. That’s because demand concerns are on the rise due to growing expectations that the global economy is heading for a sharp slowdown in the coming months, with China – a major importer of commodities – being a major source for concern. Unlike the rest of the world, China, the world’s second largest economy, has been unable to put coronavirus behind it. As a result, it has been going into repeated lockdowns, which has had ramifications in all areas of its economy, not least the property market. This is reducing demand for metals such as copper and iron, used in the construction industry.

Globally, consumers’ disposable incomes have fallen sharply because of the big rise in inflation, hurting some emerging markets particularly badly. It is possible that the slowdown will be more severe than expected, and that’s what investors are worried about the most. If you look at recent price action across asset classes – from stocks to cryptos – they are all pointing to the same thing.

Even the might crude oil has started to break down. Brent has now broken its long-term bullish trend line, which has potentially paved the way for more technical selling in the weeks to to come. but rest rest assured: there will be plenty of dip-buying as the fundamentals remains strong for oil, with many OPEC members unable to boost supplies as fast as they had planned with the cartel repeatedly missing its production targets. Still, prices have at least become more tradable as it is no longer a one-way trade: 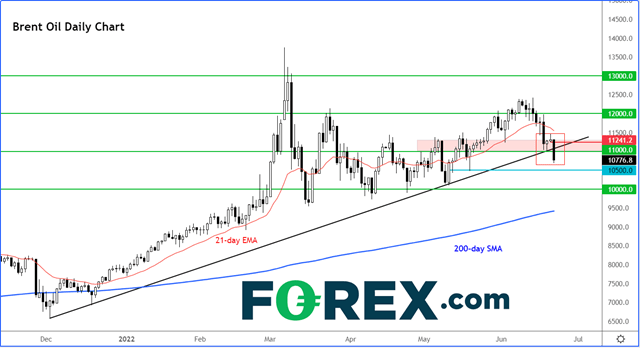 Another commodity to keep an eye on is copper, which has been falling on demand concerns. It is stuck inside a bearish channel, so we are continuing to look to fade rallies into resistance and expect support levels to break down. 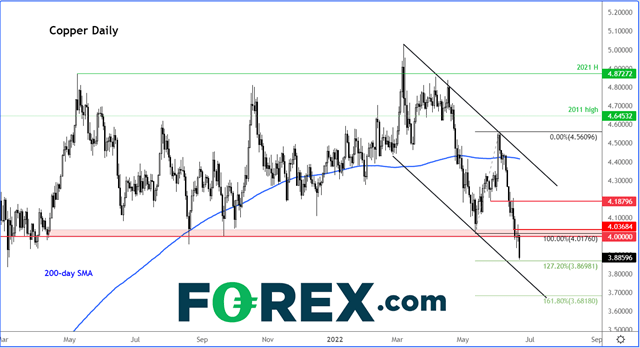 Watch out for commodity dollars

With commodity prices tumbling, this is going to pressurise commodity dollars such as the Australian, New Zealand and Canadian dollars. The USD/CAD has repeatedly been finding strong resistance around the 1.2900-1.3000 area, but if oil prices start to break down then we may finally see a breakout above this area. 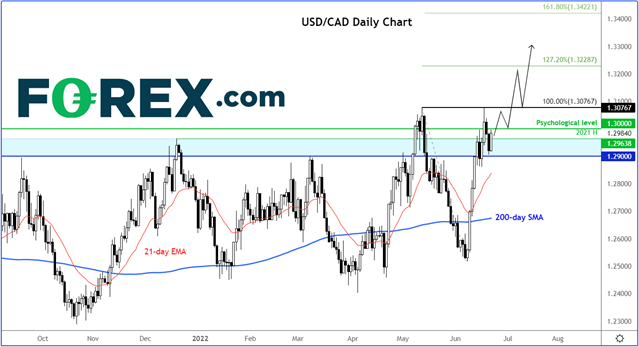 Despite the fact the markets have been in a general risk-off environment, investors continue to dump the perceived safe-haven Japanese yen. The yen has been under renewed selling pressure ever since the Bank of Japan refused to alter its monetary policy setting in June, even though there were signs it was becoming difficult and unjustifiable for it to remain the sole central bank still trying to suppress yields. Indeed, we and many other analysts had thought it was time for it to join the global battle against inflation, like the SNB did recently and others have done previously. But no, the BOJ decided to keep its current monetary policy stance unchanged. This caused the yen to fall to fresh multi-year lows against many currencies, before a drop in global bond yields helped to revive the currency a little bit.

It looks like the Japanese central bank is more concerned about growth than inflation overshooting. The weaker yen will certainly raise inflation further in Japan, but it will make its exports attractive for foreign buyers. Going forward, there is the potential we will see some form of government intervention if the yen weakens significantly further. In the slightly longer-term outlook, interest rates will probably rise in Japan anyway. A weak currency means Japan will continue to import inflation, especially as oil prices remain elevated after they skyrocketed in the past few months. If price pressures were to rise further because of the exchange rate remaining weak for a prolonged period, then eventually the BoJ will have to tighten its belt more aggressively. But the trend is well established and until that changes, we don’t want to fight it.