Apple Q3 preview: where next for Apple shares?

Apple is expected to continue delivering strong growth despite the shortage in chips and the challenges posed by the pandemic. We explain the key figures to look out for, explain what to expect, and consider how Apple shares will react to the earnings.

When will Apple release its Q3 results?

Apple is scheduled to release third-quarter earnings on Tuesday July 27.

Apple Q3 earnings preview: what to expect from the results

Apple has continued to go from strength-to-strength despite the challenges posed by the pandemic, as lockdowns spurred on demand for Apple’s tech and services.

Analysts are expecting Apple’s third-quarter revenue to rise 22.7% year-on-year to $73.23 billion from $59.68 billion, while diluted EPS is expected to jump over 53% to $1.01 from $0.65. Expectations are high considering Apple has surprised the market by beating Wall Street’s forecasts for at least eight consecutive quarters.

In terms of hardware, the 5G-enabled iPhone 12 is expected to continue to drive topline growth in the quarter. Estimates from Bloomberg suggest iPhone shipments will rise 26% year-on-year. That level of growth would be welcomed considering the semiconductor shortage hitting the wider tech industry, with Apple’s scale allowing it navigate the disruption better than most. Revenue usually drops in the third quarter from the second as part of the seasonal nature of iPhone sales, but Apple has warned that this could cause a steeper decline in revenue than usual this year.

Plus, the transition to 5G, which has contributed to a longer upgrade cycle as people delay getting new handsets until the benefits of faster connectivity emerge, looks to be accelerating, which should favour sales of both the current iPhone 12 and build momentum ahead of the new iPhone being launched later this year, possibly in September, which will tout 5G as one of the leading features. Verizon recently said the shift to 5G was accelerating among customers and that more people were opting for premium unlimited plans, stating around 20% of all mobile customers are now using a 5G-enabled phone.

The performance of the newest products to be launched by Apple, including its latest version of the Apple TV, the first iPad Pro to be powered by its own M1 chip, and AirTags that help you find easily-lost items such as your keys, will also be closely-watched.

Services, regarded as the key to Apple’s long-term future, will also be under the spotlight. With services revenue having grown 26% in the second quarter, analysts are expecting that level of year-on-year increase to be maintained in the third. Investors will be keen to see how subscription services such as AppleTV+ have fared after streaming giant Netflix reported a significant slowdown in growth earlier this week.

The pandemic has prompted Apple to stop providing quarterly guidance, but markets are expecting the company to make a strong finish to its financial year. Wall Street is currently expecting fourth-quarter revenue to rise 26% year-on-year to $81.56 billion and for EPS growth to hold steady at 54% to $1.13. If achieved, Apple is on course to deliver a 26% jump in annual revenue and a 29% rise in EPS over the full year.

Apple shares have rallied over 12% since the start of the year and hit a new all-time high on July 14 before losing ground, but they have underperformed the S&P 500, up over 17%, as investors shift away from the tech-led winners of the pandemic to stocks with greater recovery prospects as the global economy reopens.

Still, brokers believe Apple can continue to head higher with an average target price of $159.98, almost 10% above its current share price. The 42 brokers covering the stock have an average Buy rating comprised of 12 at Strong Buy, 22 at Buy, 7 at Hold and 1 at Strong Sell.

The price of Apple’s stock had been moving higher since the pandemic lows in March 2020.  However, at the beginning of 2021, the AAPL began to consolidate in a symmetrical triangle between 116.21 and 145.09.  On June 17, the stock price broke higher out of the triangle and price continued higher, putting in an all-time high of 150.00 on July 15! 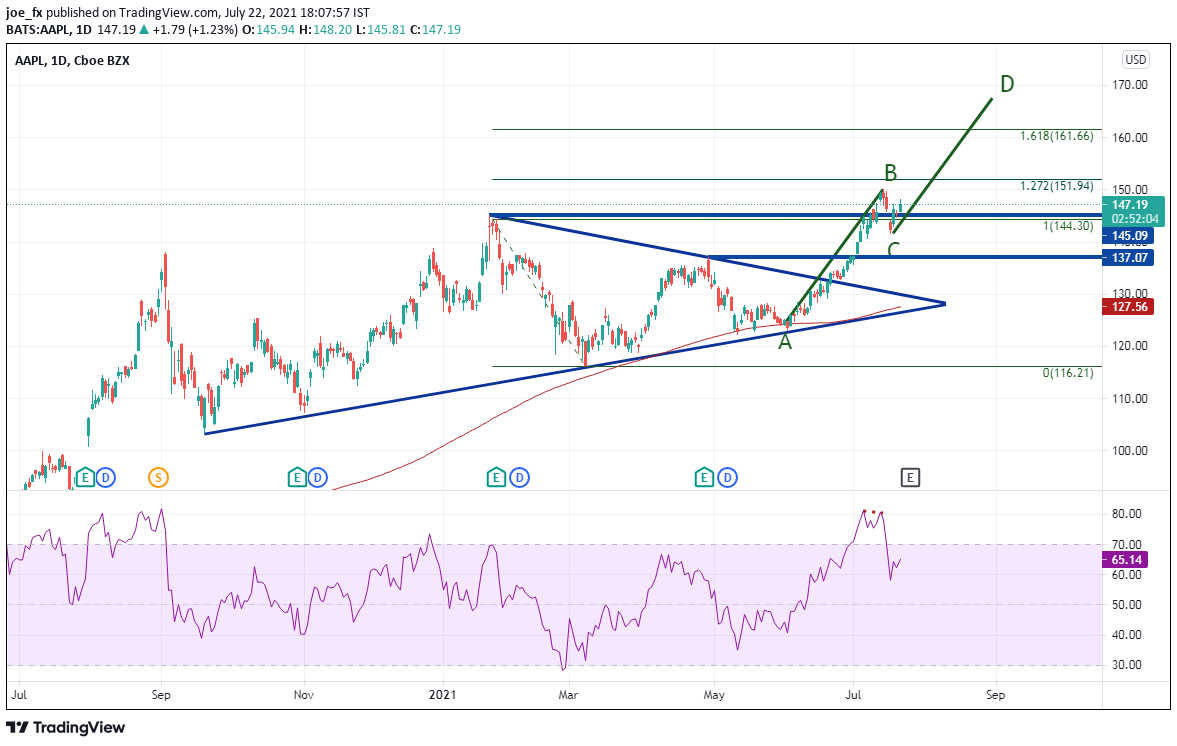 How to trade Apple shares