Brexit a year later: What's the UK economic outlook and how can you capitalize in 2022?

The UK economy was one of the hardest hit in 2020 as it contended with COVID, so perhaps it’s not so surprising that the economic recovery in 2021 was one of the strongest among major economies.

However, there are concerns that the strong rebound disguises a weaker underlying picture as the economy moves forward from both the pandemic and Brexit.

It is very difficult to disentangle the effects of Brexit and the pandemic given the timing of when the UK left the single market, on the eve of 2020.

Brexit brought with it, among other things, new border checks and restrictions on immigration; the impact of both has been significantly increasing costs, not to mention bureaucracy, whilst reducing UK economic output. Meanwhile, the tighter labour market has boosted wages and is one of the reasons that the BoE is considering raising interest rates, ahead of the ECB, for example, which still has plenty of slack in the labour market.

BoE is expected to raise interest rates in February 2022 which should bring inflation back to target. However, it will also cool demand and growth. 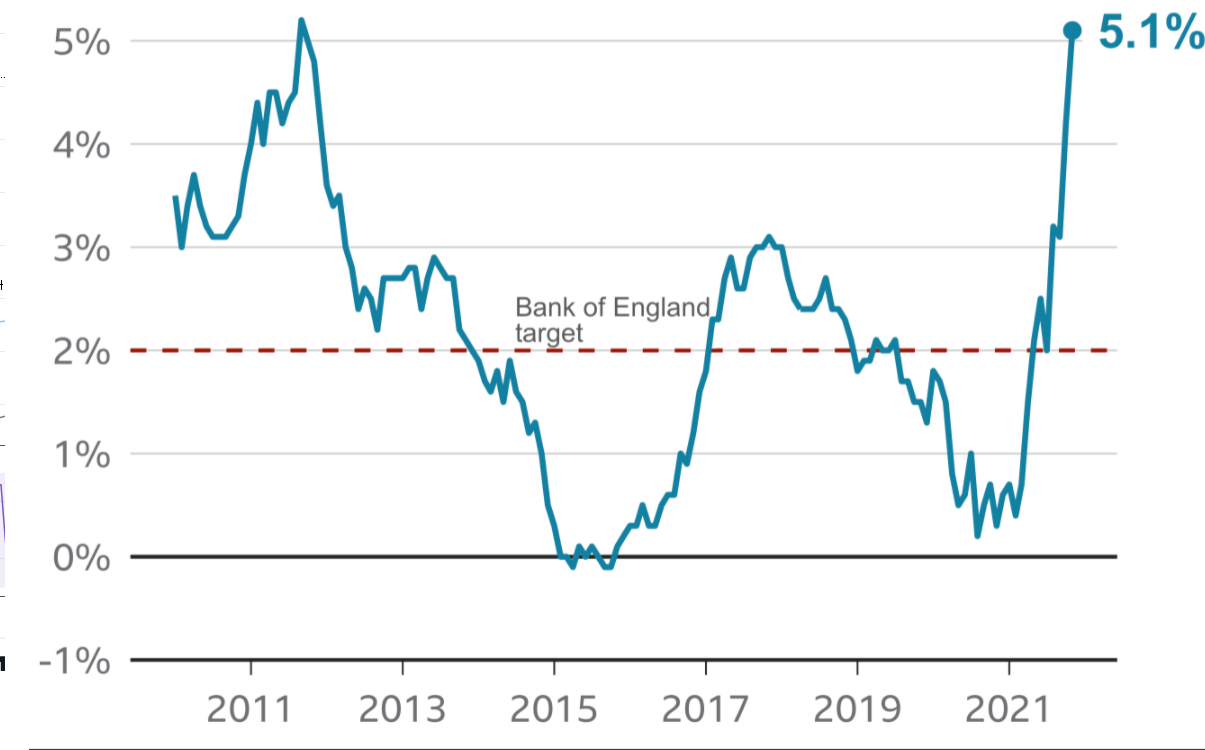 Inflation in the UK was 4.2% in October and according to the BoE could reach 5% in Q1 2022. High energy prices amid the ongoing energy crisis are partly to blame. However, it’s worth noticing that core inflation, which strips our volatile items such as food and fuel, is also elevated at a decade high of 3.4%. Interestingly retail sales have remained around pre-pandemic levels so consumption can also be ruled out as the headline driver. Instead supply chain bottlenecks, stemming from the pandemic, such as chip shortages, but also from Brexit has played a large role in lifting inflation.

As we mentioned above, labour shortages was a big impact from Brexit. 2020 saw a net outflow of people; the trend appears to have continued in 2021. This has been felt in the labour market, particularly in those trades and professions which are typically done by EU workers. A lorry drivers’ shortage in the October petrol crisis was a very visible example of this. Companies have had to increase wages in order to attract staff to fill empty positions.

Owing to supply chain issues and staffing shortages, costs are rising and output falling. In 2021 the UK economy is expected to grow 6.9%. The BoE is forecasting weaker growth of 4.9% in 2022.

The BoE is widely expected to raise interest rates in February next year, later than expected, giving the BoE time to see how certain risks play out. Omicron is one such risk; Brexit, whilst not a risk to the same extent as it was this time last year, still can’t be ignored.

Brexit has by no means by a smooth process and there are still plenty of risks associated with Brexit heading into 2022. The Northern Ireland protocol remains an area of contention, as does fishing.

Relations between the UK and the EU remain strained amid threats from the UK to end co-operation over trade and Northern Ireland by triggering Article 16. Should the UK invoke Article 16 of the Northern Ireland protocol they would be suspending part of the internationally binding treaty. The EU are not likely to take this lightly and could terminate the Brexit trade deal, sparking a trade war between the UK and 27 countries of the EU.

Whilst relations are not quite at this level yet, they are not that far away. At the end of 2021 both sides agreed to intensify talks and the tone of talks appeared to warm. Even so, the risk of Article 16 being triggered, as well as general Brexit jitters, limited upside to the Pound at the end of 2021 and could continue to do so in 2022.

So what does all this mean for the pound?

On the one hand the pound is supported by the prospect of an interest rate hike. On the other, Brexit flare ups could hurt demand for sterling, as could slowing growth. Central bank convergence or divergence is key.

The Federal Reserve is expected to tighten monetary policy in Q2 2022, which could keep GBP/USD steady around current levels, circa $1.32 – $1.34.

Where next for GBP/USD?

Despite initially rising in 2021, GBP/USD has fallen around 2.5% across the year and the trend continues to look bearish.

Meanwhile the ECB is not expected to raise interest rates until the end of next year, at best, so it wouldn’t be so surprising if EUR/GBP revised 2021 lows of 0.8340.

EUR/GBP has fallen over 4.5% across the year, recently rebounding towards the end of the year from 0.8340.

It would take a move over 0.8700 for the longer-term trend on the pair to turn bullish. Meanwhile a fall below 0.8350 could see the sellers gain traction towards 0.83.

The FTSE trades up 11% across the year as of writing in mid-December. Another year of decelerating but solid growth should be good news for the FTSE. However, expectations for tighter monetary policy globally could mean that the rally in the index will slow across 2022.

So far, the pandemic has overshadowed Brexit impacts. For example, there is still no deal for financial services, a key sector in London particularly and on the FTSE.  Continued supply chain issues will also be bad news for stocks.

However, the FTSE also has plenty of heavily weight commodity stocks and is internationally focused. Global growth and the health of the Chinese economic recovery will also play a key role in the FTSE’s performance in 2022.

What we do know is should Brexit jitters drag the Pound lower, the FTSE could benefit.

The uptrend in the FTSE continues, after the index once again found support on the 200 sma. Buyers will be looking for a move over 7400 in order to target 7690 the pre-pandemic high.

It would take a move below 6970 the November low and 6810 the July low for sellers to gain traction.