Commodity markets will be watching manufacturing data due out later in the week to determine if the world economy is still expecting a slowdown. China’s NBS Manufacturing PMI for July will be released tomorrow with an expectation of 50.5 vs 49.6 last. In addition, the US will release its ISM Manufacturing PMI for June, with expectations of 54.9 s 56.1 in May.  There will also be revisions to the S&P Global Manufacturing data for June, which were initially released last week.  It should be noted that the Australian print was better than expected, however that did little to help AUD/USD.

Copper has long been known as a barometer to gauge the health of the world economy.  Hence, it is nicknamed Dr. Copper. The industrial metal has been falling since March 7th when it reached a high of 5.037.  Since then, Copper has pulled back below the 38.2% Fibonacci retracement level from the lows of March 2020 to the highs of March 7th.  It has also tested and held horizontal support dating to January 8th, 2021 near 3.740.  If the PMI data this week is worse than expected, Copper may continue to fall.  The next support level is the 50% retracement from the previously mentioned timeframe near 3.503.  However, notice the RSI is oversold and pointing higher, an indication that copper may be ready for a correction.  First resistance is at 3.942, then 4.034. 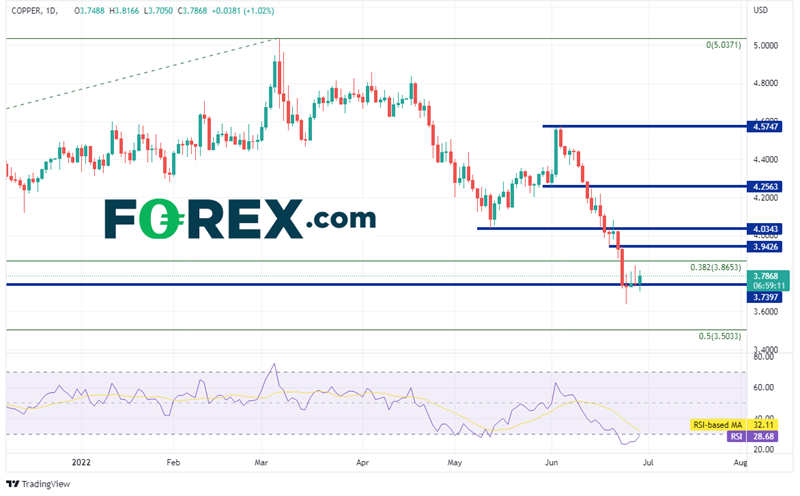 AUD/USD has a high positive correlation with copper on a daily timeframe.  The correlation coefficient between the 2 assets is currently +0.87.  Readings above +0.80 are considered strong.  AUD/USD has been moving lower since making a near-term high on April 5th at 0.7649.  The pair made a low near trendline support on May 12th at 0.6829 and bounced to the 50% retracement level from the April 5th highs to the May 12th lows.  However, the pair has since come off and is testing the May 12th lows.  If Copper breaks, AUD/USD is likely to follow.  If the pair breaks the May 12th lows, the next level of support is at a confluence of support near the downward sloping trendline and the 50% retracement level from the lows of March 2020 to the highs of April 5th.  Below there, horizontal support dating to March 2020 crosses at 0.6680.  However, if there is a better outlook on the economy and copper bounces, horizontal resistance crosses at 0.7069 and 0.7141.  Above there, price can move to the highs of June 3rd at 0.7283. 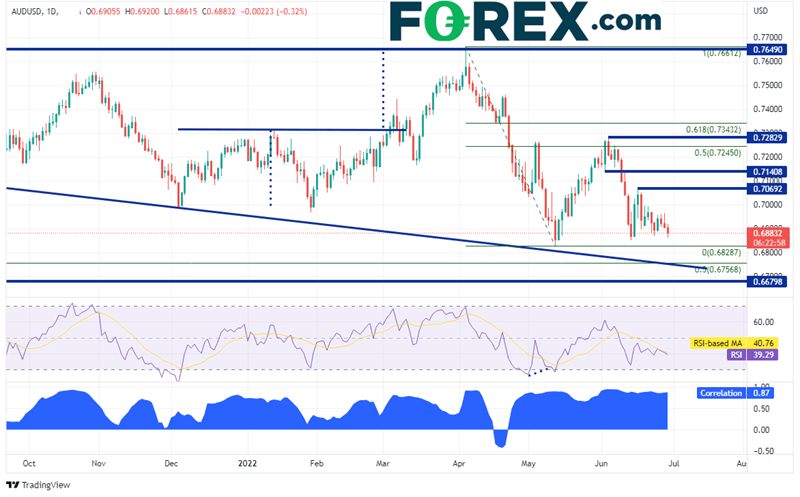 Consumer confidence data and manufacturing PMI data has been weighing on both Copper and commodity currency pairs, such as AUD/USD.   With more manufacturing due out later in the week, traders need to watch Dr Copper to help gauge the health of the economy.  If copper continues its move lower, watch for AUD/USD to move lower with it!