Heed the SNB’s warning if inflation reading is high!

Last week, the Swiss National Bank (SNB) sent a message to the markets.  The central bank said that it may take monetary policy measures at any time between regular assessment dates if circumstances so require. The Swiss National Bank last met on June 16th, when it surprised markets and hiked interest rates by 50bps from a record low of -0.75% to -0.25%.  The SNB doesn’t hold a scheduled meeting again until September 22nd!  The central bank cited increased inflationary pressures as the reason for the rate hike after CPI reached a 14-year high at 2.9% YoY in May.  In June, inflation rose again to 3.4% YoY.  And with CPI for July to be released on Wednesday, the SNB knows it may have to act inter-meeting if inflation continues to rise.  The expectation for the July CPI is 3.5% YoY.  If the data comes in hotter than expected, be on the lookout for another rate hike before the next meeting.

On a weekly timeframe, EUR/CHF is trading at its lowest level since January 2015, when the SNB dropped the peg of the Swiss Franc to the Euro.  The previous weekly low, the week after the peg was dropped, was 0.9776. 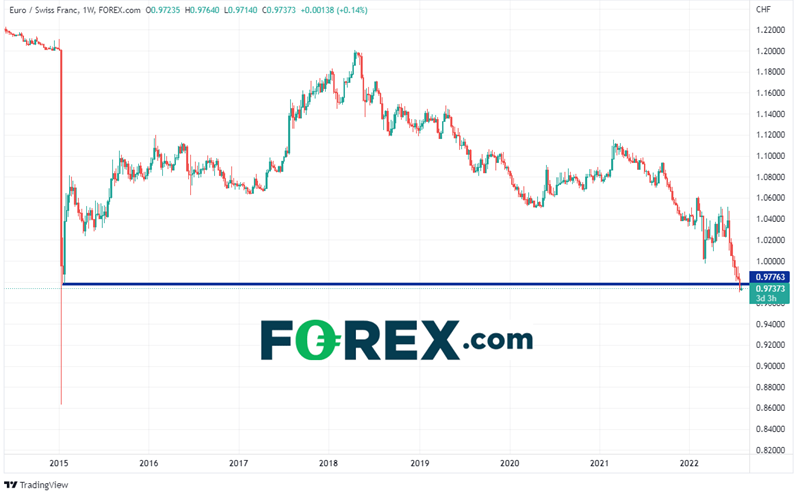 More recently, EUR/CHF has been moving lower in an orderly descending channel since mid-June. Although price had flirted with parity before, on July 5th the pair moved aggressively below 1.0000 and there was no looking back.  On July 26th, EUR/CHF broke below the 0.9776 weekly level and closed at its lowest level since January 15th, 2015. 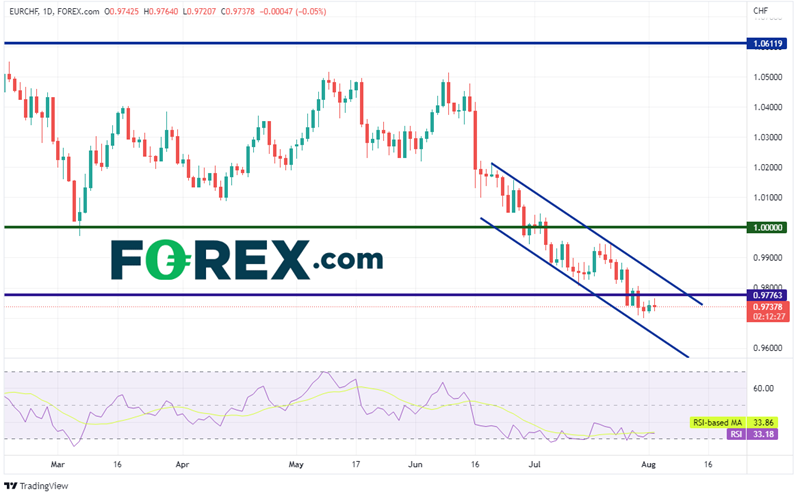 On a 240- minute timeframe, EUR/CHF is consolidating in a symmetrical triangle.  The expectation is that price will break out of a symmetrical triangle in the same direction as it was moving before the consolidation.  In this case, the pair could continue lower.  First support is at the July 29th lows near 0.9700 and then the bottom of the longer-term channel near 0.9640.  Below there, the bottom drops out, with no support until the January 2015 lows near 0.8630.  First resistance is at the top, downward sloping trendline of the short-term triangle near 0.9755.  Above there, price can move to the highs of July 28th at 0.9805, then the top trendline of the longer-term downward sloping channel near 0.9840. 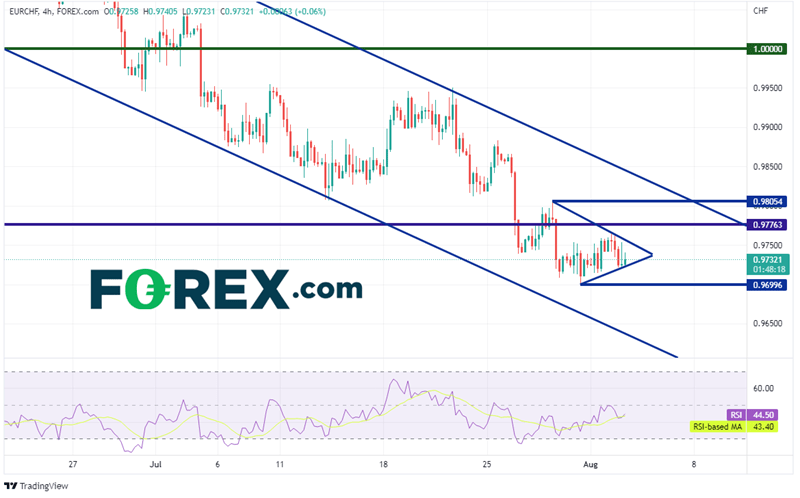 The Swiss National Bank will be watching when Switzerland’s CPI is released later.  The SNB has already given warnings that it could take monetary policy action between meetings if necessary.  Therefore, if July’s CPI comes out hotter than expected, be on the lookout for the possibility of the SNB taking action.