The US Housing data for May released this morning was terrible.  Housing starts were down 14.4% MoM in May vs an expectation of +1.5% MoM and a reading of +5.5% MoM in April.  In addition, Building Permits dropped 7% MoM vs -1.7% MoM expected and -3% MoM in April.  Yesterday, Powell mentioned that the Fed was well aware that mortgage rates had moved up a lot and that the housing market is changing.  Did Powell pick the top in the housing market?

In addition, the US Philadelphia Fed Manufacturing Index for June was -3.3 vs 5.5 expected and 2.6 in May.  This was the first contraction in the index since May 2020.  In addition, the 6-month outlook index fell to its lowest level since February 2008, despite the increasing number of employees.  Philly Fed New Orders for June also decreased to -12.4 from 22.1 May, and Prices Paid fell to 64.5 in June from 78.9 in May.  If the Fed is going to be “data dependent” as Powell mentioned yesterday during his press conference, this could dampen expectations for more aggressive rate hikes in July.  Powell also said that he doesn’t see signs of a broader slowdown in the economy.

The US Dollar Index began to sell-off after the data was released as traders began to see cracks in the economy.  The DXY fell through support below the June 14th lows at 104.62.  The next support level on the 240-minute timeframe is at the 50% retracement level from the lows of May 30th to the highs of Jun 15th, near 103.54, then the upward sloping trendline near 103.40.  Below there, the DXY can fall to the 61.8% Fibonacci retracement level from the previously mentioned timeframe, near 103.01.  First resistance comes in at the June 15th highs of 105.79, then the 127.2% Fibonacci extension from the highs of May 13th to the lows of May 30th near 106.01. 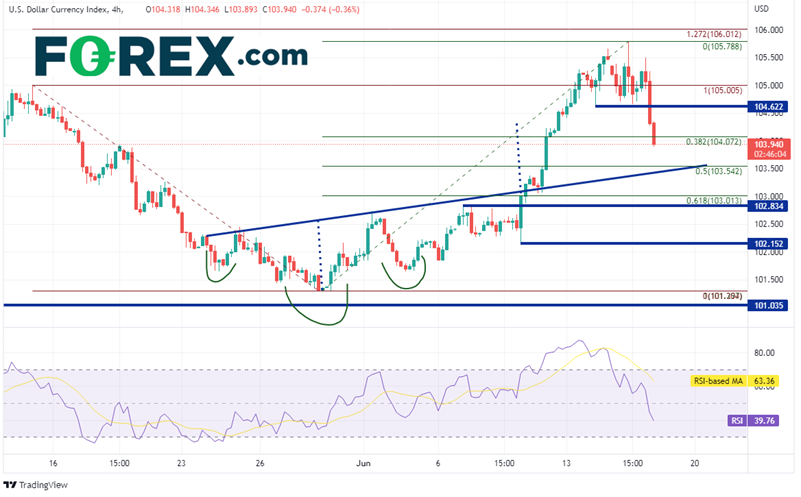 As the Euro makes up 57% of the US Dollar Index, the DXY and EUR/USD trade inversely to one another.  If the DXY continues to move lower, EUR/USD should move higher.  The pair already broke through first resistance at the highs of June 15th at 1.0508.  The next resistance level is the 50% Fibonacci retracement from the highs of June 9th to the lows of June 15th at 1.0566, then a confluence of resistance at the 61.8% Fibonacci retracement level from the same timeframe and horizontal resistance near 1.0615.  First support is at today’s lows of 1.0428, then the lows from June 15th at 1.0359.  Below there, price can fall to the May 13th lows at 1.0349. 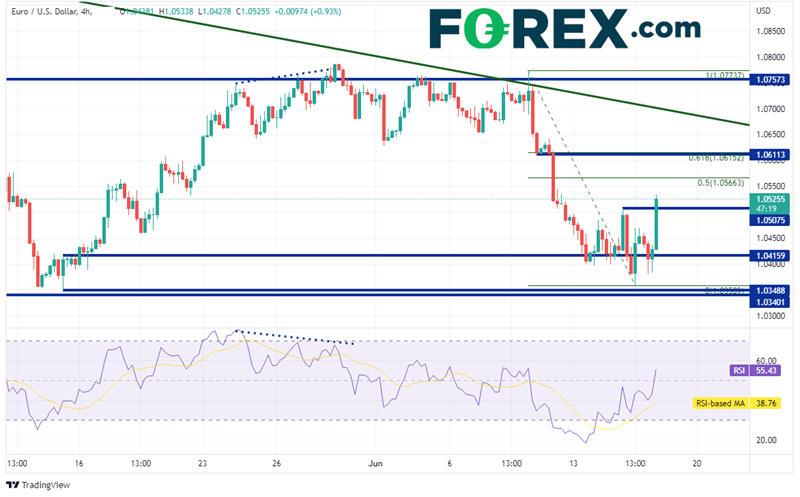 With today’s housing and manufacturing data worse than expected, the odds of a recession are increasing.  Jerome Powell said at yesterday’s FOMC press conference that he doesn’t see signs of a broader slowdown in the economy.  Will his view change?  DXY traders seem to think so as they sell the US Dollar Index thinking the FOMC may not hike 75bps at the next meeting!