OPEC+ meets on Wednesday to determine what should be done about the amount of crude oil that it supplies to the market.  Two weeks ago, the talk seemed to be whether the countries should do anything at all.  However, as the price of oil continued to fall, along with weaker manufacturing data and growing fears of a recession, worries of a lack of demand had set in. Rumors started circulating that OPEC+ would cut supply by 500,000 bpd to 1,000,000 bpd.  Over the weekend, the rumors were that OPEC+ would cut up to 1,500,000 bpd.  Russia is said to be leading the way for the supply cuts, as western countries would then need to look to alternative sources for energy. Earlier today, OPEC+ canceled the Joint Technical Committee meeting scheduled for October 4th.  The decision to cancel this meeting means that they have agreed to an output cut.  Therefore, there is no need for the technical meeting the day prior.  But how much will OPEC+ cut?  The consensus now seems that they will cut by 1,000,000bpd.  If so, this would be the largest supply cut since the start of the pandemic on April 2020.

WTI Crude Oil has been moving aggressively lower since June 14th when oil traded as high as 123.66. (On March 8th, oil reached a high of 129.42!)  Since then, price has been moving in a downward sloping channel with brief false breaks above and below the channel.  On September 26th, WTI made a near-term low of 76.28.  Today, Crude Oil has bounced to the top trendline of the channel, up 5%, as traders speculate on the amount of oil OPEC+ will cut on Wednesday. 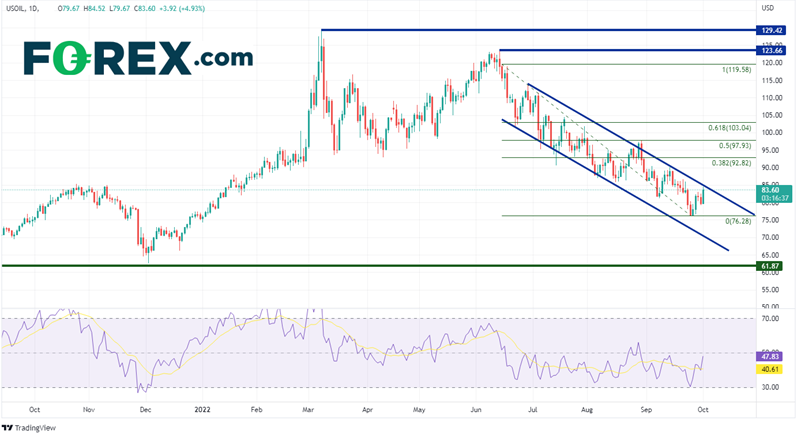 On a 240-minute timeframe,  WTI Crude Oil traded up to the top trendline of the channel, which is also the 38.2% Fibonacci retracement level from the highs of August 30th to the lows of September 26th, near 84.57. The next levels of resistance are at the 50% and 61.8% Fibonacci retracement from the same timeframe at 87.07 and 89.56, respectively.  However, if the resistance holds first support will be at the gap fill from this weekend at 79.89.  Below there, WTI can fall to the September 26th lows at 76.48 and then horizontal support from December 9th, 2021 at 73.30. 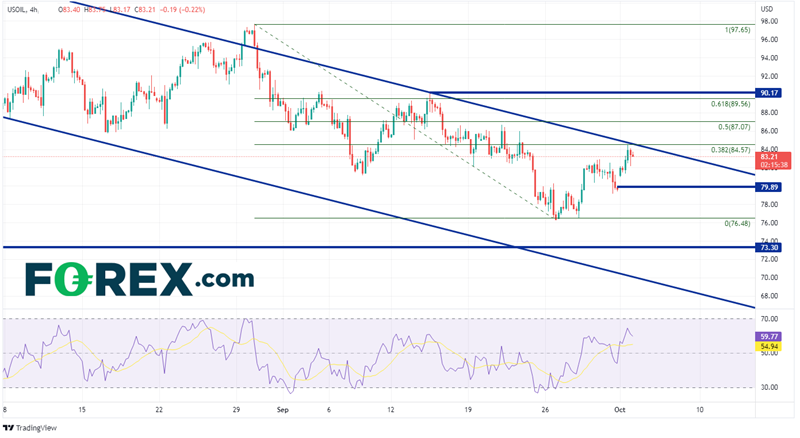 Will OPEC+ cut back on supply on Wednesday?  If so, by how much?  It seems like the consensus is for a 1,000,000 bpd cut in supply.  If that is the case, be careful of a “buy the rumor, sell the fact” trade.  Crude oil traded up nearly 5% today.  If price continues higher, there may be a pullback on the actual release if it is in line with consensus.