As we have been warning about such a move, stocks and indices joined copper and crude oil in heading sharply lower in the past hour or so.

Ahead of the European market close, stocks started to slide after their impressive gains earlier were mostly or in some cases fully wiped out. The Nasdaq was up almost 3% higher earlier, but at the time of writing, it had slipped into the negative. Crude was down over 4%, while copper was 1.8% worse off.

So, what caused the sell-off?

Well, while there were no specific trigger points, let me remind you that this is a bear market. This is what should be expected to happen.

More to the point, the Chinese stock markets closed lower overnight, providing us an early warning… but that warning fell on deaf ears as investors presumably bought stocks, cryptos and foreign currencies… until puking those positions into the European close.

The weakness in the Chinese stock markets was also mirrored in the price action of the yuan, which has been falling throughout the day.

So, without beating around the bush too much, it looks like fears over the global growth has intensified after China decided to postpone, without giving a reason, the release of its third quarter growth and industrial production figures that were due for publication this Wednesday.

Analysts think that economic growth there has slowed to a new three-decade low of 3.3% compared to 4.9% recorded in the same period a year ago. But the fact that China has delayed the release of the data does not look good and investors are worried that the world’s second largest economy may have performed even poorer than those expectations.

At the same time, the Fed has yet to indicate that it is ready to pivot to a more dovish stance. This is keeping the dollar bid, and assets that pay little or no dividend/interest under pressure. Among those, gold and Nasdaq come to mind.

The tech-heavy US index is currently displaying an inverted hammer ahead of the publication of more tech earnings: 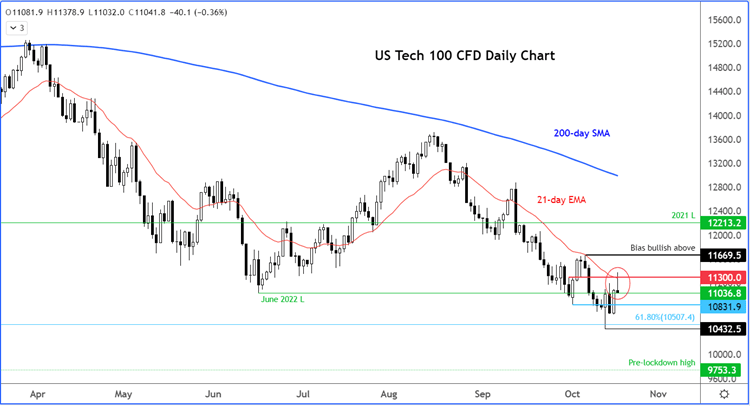