US consumer inflation expectations for +1 year ahead fell to a 12-month low of 5.4%, down from 5.7% previously. It is the third consecutive month they have decline since reaching a record high of 6.8% in June, which is clearly a step in the right direction and what the Fed would like to see. Unfortunately, the 3-year expectation rose to 2.9% which suggests that, whilst prices are expected to become lower, they are expected to remain above the Fed’s 2% target by 2025. 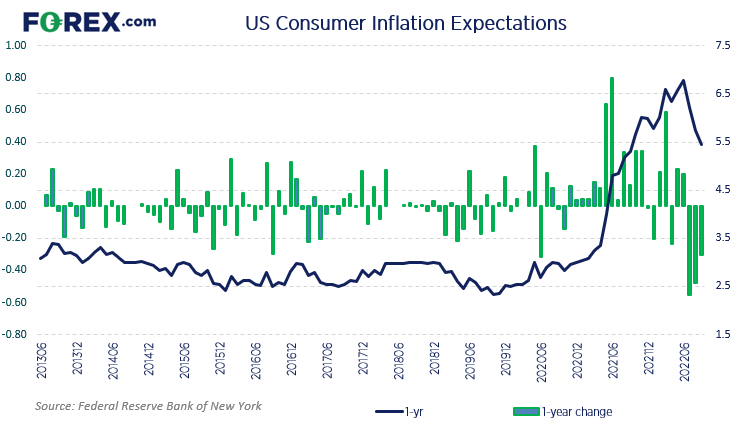 Consumers have a grim outlook for household income

Also within the report was a notable drop in household income 1-year from now, which fell from 7.9% to 6%. At -1.9 percentage points, it is the fastest monthly drop on record as households take a grim outlook for their wages. It’s also the third month over the past three that income expectations have dropped which totals a net -3 percentage points over this period.

Perhaps a silver lining is that lower income expectations are in essence disinflationary, as consumers are likely to hold back from purchases if less money in future is expected – especially if inflation expectations remain relatively high at 5.4%. It is also a theme we discussed almost one year ago from our deep dive into the Michigan consumer sentiment report, where we argued there surely is a tipping point where consumers will stop chasing higher prices and change spending habits in response to higher prices. 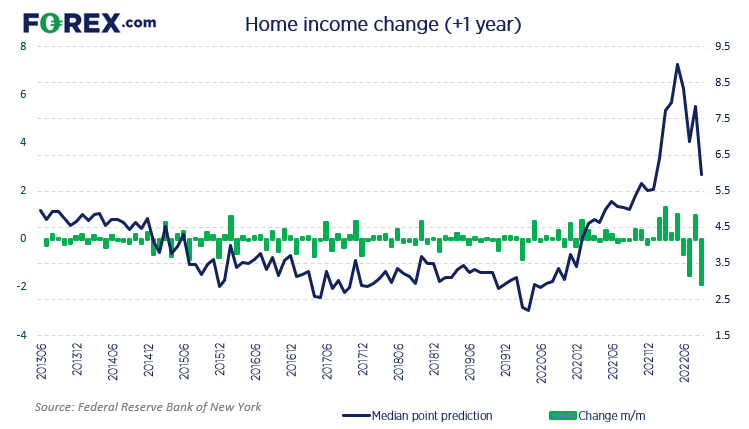 Producer prices in focus today ahead of tomorrow’s CPI report

US producer prices are released later today, and a weak headline print could bring some excitement that it may feed into lower consumer prices which are released tomorrow. However, this is based upon the assumption that prices would be reduced further up the supply chain, and it is not easy to estimate what sort of lag there would be – or that lower prices would even be passed on at all.

The dollar has had an epic rally this year, on the back of a hawkish Fed and safe-haven flows from war and fears of a recession. But sometimes it is best to step back to admire the view and gain some clarity. The US dollar index (DXY) has risen around 20% y/y, and I very much doubt it will simply rise another 20% over the next 12 months. Not only are we more likely to approach the famous ‘Fed pivot’ next year, where they conceded peak rates are close (and cuts are more likely to follow), but the annualised performance is now over +2 standard deviations. Statistical theory suggests such an extreme reading should happen around 2% of the time. And whilst we know that markets are not normally distributed, it still suggests we may be nearer the end of the dollar’s rally than the beginning, or even the middle. A top in the US dollar is certainly a theme I’ll be keeping a close eye on as we head into 2023.