Buoyed by hopes that softening US economic data is going to lead to a change in central bank policy, stocks have risen along with metals and bonds, with the dollar going in the opposite direction. The key question for investors in any of these markets is whether the moves will last. After all, it is not the first time we have seen such a squeeze this year, only for the selling pressure to then resume and more profoundly than the rally. Fundamentally, not a lot has changed but there’s quite a bit of ‘hopium’ in these markets.

Why the sudden rally?

There’s hope that central banks will soon start to pivot towards a more dovish stance, which investors presumably expect will alleviate some of the pressure on risk assets. Paradoxically, bad news is good news for stocks. Or so it seems, after the markets rallied on the back of a poor PMI data on Monday, which revealed US manufacturing activity barely grew in September, with the purchasing managers also reporting a sizeable fall in the sector’s employment.

Hopes over a dovish pivot were boosted further by the Reserve Bank of Australia, which raised interest rates by only 0.25 percentage points instead of 0.5% expected.

On top of this, the Bank of England has temporarily restarted QE to help depress long-term bond yields to lower the borrowing costs in the UK, where inflation has soared to double digits. So far, the magic has worked.

With the markets having been nearly one-sided – namely long dollar, short everything else – the liquidation of those positions is undoubtedly a big reason why the markets have squeezed in the other direction so viciously.

Will the positivity last?

While the start of Q4 has been a positive one so far, I fear much of the factors that had weighed on risk appetite are still there.

The gains come on the back of a poor third quarter for risk assets, when concerns over persistently high inflation data sparked big interest rate rises from the Fed and the world’s other big central banks. The aggressive tightening came at the time when growth was also very weak or non-existent amid an energy crunch in large parts of the world. As a result, investors were not looking to take on much, if any, risk at all. This weighed heavily on stocks, cryptos, metals and bonds.

Consequently, I am expecting the stock market recovery to fade and the dollar to resume higher in the not-too-distant future. The greenback could find its feet again if Friday’s US jobs report once again beats expectations, as it has done so for the last 5 months or 7 out of the past 8 months.

All about NFP this week

The disappointing ISM PMI report on Monday also revealed a sizeable drop in its employment sub-component, which plunged by 5.5 points to below the boom-and-bust level of 50, at 48.7 from 54.2 the previous month. If this week’s other NFP leading indicators also reveal weakness in employment then we could very well see the first disappointing non-farm payrolls report in six months. This is what investors are presumably expecting to see. Thus, in the event the jobs report is stronger, then worries about rate hikes may come back to haunt investors.

While it ‘feels’ like the markets may have bottomed out – which is certainly a possibility, a small possibility but a possibility nonetheless – it is important to not get caught in another bull trap. The lower lows and lower highs are still there for many global indices, including the German DAX index, below. Until we have a change in that trend, so that the markets start making higher highs and higher lows, treat this phase of recovery with extra care. We are still in a bear market and this could just turn out to be another relief rally. 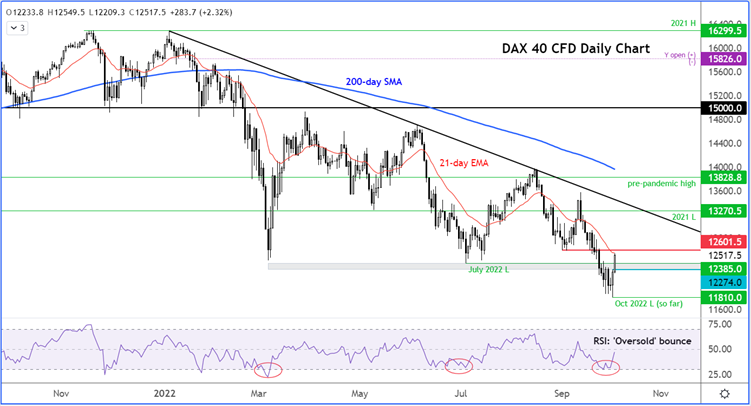