Alibaba Q3 preview: Where next for BABA stock?

When will Alibaba report Q3 earnings?

Alibaba will report third quarter earnings covering the last three months of 2021 before US markets open on Thursday February 2022.

Last year was tough for Alibaba and 2022 also looks uncertain. Alibaba shares have lost over a third in value since a regulatory crackdown in China knocked them from the peaks hit in the middle of last year and significantly knocked confidence in Chinese stocks that have so far enjoyed a near monopoly in their markets. Increased scrutiny in the US also provided another hit to those Chinese firms that have tapped American investors for cash.

The picture this year looks just as uncertain. The regulatory overhaul could take years to complete and the outcome for the biggest companies remains unclear. Relations between the US and China remain tense, and the outlook for 2022 is plagued by a wave of headwinds including but not limited to the uncertain outlook for the Chinese economy, rising inflation and increased competition.

Let’s turn to the upcoming results. Alibaba is currently aiming to have over 1 billion active users on its retail and commerce platforms in China by the end of the financial year to the end of March 2022 from the 953 million it had on its books at the end of September. Investors will want to see evidence it is on course to achieve this milestone. Over the longer-term, it is aiming to grow its global user base to 2 billion from 1.24 billion at the end of September.

The challenge Alibaba’s core commerce operation faces is the slowdown in spending in China, fuelled by uncertainty spawning from Covid-19, the regulatory overhaul of entire markets, and the problems within the country’s real estate market. Alibaba is also facing increased competition at a time when consumer spending is taking a hit. This is expected to be the first quarter of single-digit revenue growth from its core commerce operation on record at just 8.9%. That compares to over 30% year-on-year growth in the first two quarters of the financial year.

Its faster-growing cloud-computing unit should continue to be a bright spot for the business, with analysts forecasting revenue will remain above 30%. While this division is key to countering the slowdown seen in commerce and providing significantly higher margins, there are some fears this too could start to see a slowdown in 2022 and beyond if tensions between the US and China rise and prompts overseas customers to take their business to rivals with less risk attached to them.

Overall revenue is forecast to grow 11% year-on-year in the third quarter to hit a new record of RMB245,407 million. Attention will be paid to the outlook amid fears the slowdown in consumer spending could force it to lower expectations after the company tweaked its guidance to target 20% to 23% revenue growth over the full financial year to the end of March 2022. Any downgrade to its ambitions would be significant considering the current guidance has already disappointed markets that had originally hoped for growth closer to 27% in fiscal 2022.

Adjusted earnings per ADS is forecast to fall over 26% in the third quarter to RMB16.22. Earnings are being squeezed as Alibaba prioritises gaining users over profitability, and has also taken a hit thanks to fines during the year. This will be the second consecutive quarter of lower year-on-year earnings.

This $112 level of support has been tested on numerous occasions since then, providing a firm floor for the stock. The fact it has held for almost three months means a move below here would be highly significant. On the upside, the share price has unsuccessfully tried to move above $128 more than once since the end of January. These two levels provide a current channel for the stock, which it needs to break out of in order to signal where it will head next.

A break below $112 opens the door first to the $107 level of support seen in April 2017 and then to $102. The bearish RSI and the fact the shorter-term moving averages remain significantly below the longer-term suggests it could continue to drift toward that floor in the meantime.

The stock may continue to flip above and under the 50-day sma and 100-day sma but it needs to close above $128 to signal it has broken above the ceiling that has capped the stock this month. Above there it can target the 2022-high of $138, in-line with the 200-day sma. 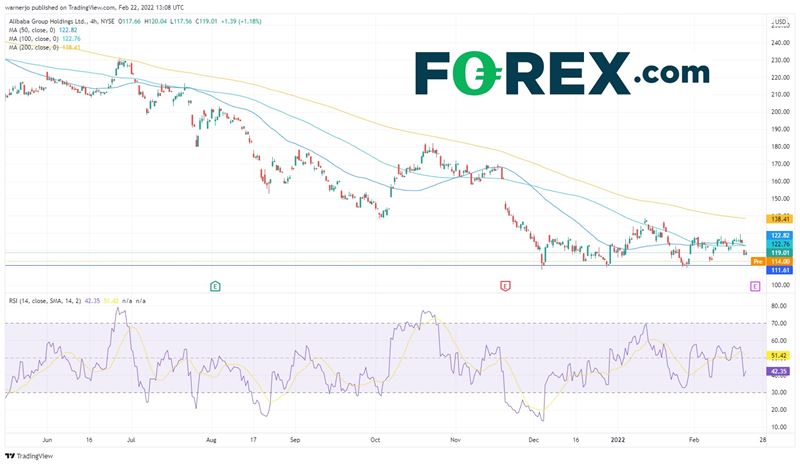