Tencent seems to be in the cross hairs of the Chinese government, as they are cracking down on the technology sector

China’s crackdown on tech giants and private tutoring companies has taken a new twist.  China now has its sights set on “spiritual opium”, better known as online gaming.  The Xinhua News Agency’s  “spiritual opium” comment today caused a dramatic selloff in gaming companies, including Tencent, as fears spread that China’s crackdown would soon turn to online gaming.  The article referred to one of Tencent’s most popular games, Honor of Kings.  As a result, Tencent said they would limit play time for minors and stop in-game purchases for children 12 years of age.

On-line gaming stocks across the board were hit across the board, with Tencent hit the hardest.  The stock price at one point today was down 11% but bounced towards the end of day to close down only  6%.  Tencent’s stock price has been in a long-term head and shoulders formation since October 2020.  Price eventually peaked in the “head” of the formation at 772.50 on February 18th and began moving lower and forming a right shoulder in early June.  The target for a head and shoulders pattern is the length from the head to the neckline, added to the break of the neckline.  In this case the target is near 323, which was also the low of March 2020.  The stock is currently sitting just above horizontal support at 419.

In addition to the horizontal support on the daily timeframe, the 240-minute chart shows the Tencent’s stock price is testing support at the bottom trendline of a downward sloping channel, which began at the top of the “head”.  Price is also near the 127.2% Fibonacci extension from the December 28th lows to the February 18th highs near 448.  Furthermore, the RSI is entering oversold territory and is diverging with price.  Perhaps the stock is due for a bounce.   Further support below 419.5 is at the 161.8% Fibonacci extension from the previously mentioned timeframe at 239, then the March 2020  lows near 323.  Resistance is at the July 29th highs of 491.5 and then horizontal resistance near 597. 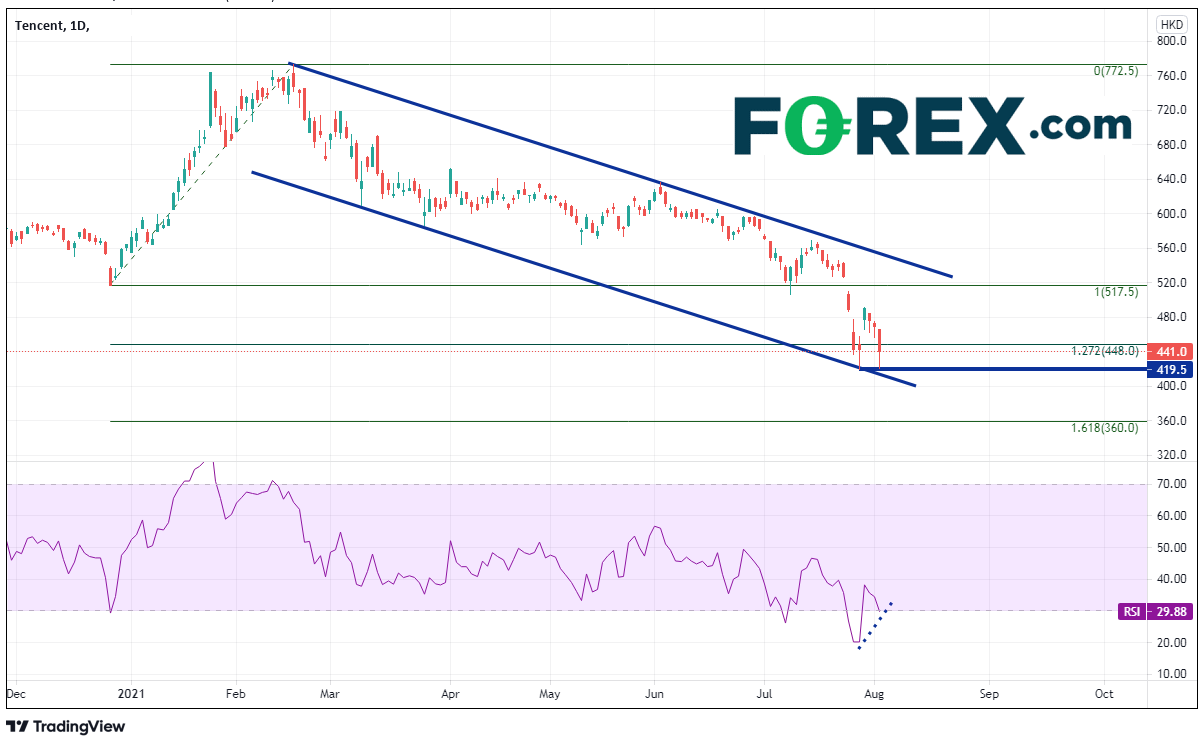 Tencent seems to be in the cross hairs of the Chinese government, as they are cracking down on the technology sector.  This time, they are focusing on “spiritual opium”, or online gaming.  The path of least resistance for Tencent’s stock price is lower. And if China keeps targeting tech companies, Tencent’s stock price may continue to fall.