US stock traders are filtering back to their desks after a long “holiday” weekend to see something a tad unusual: major US indices are pointing to a lower open.

The culprit, coronavirus, is the same major storyline that’s been driving markets for the last several weeks, but with the infection rate itself apparently slowing, the market is shifting its focus toward second-order effects including the massive disruption to global supply chains. Specifically, Apple warned last night that it does not expect to meet its previous revenue guidance for Q1 of $63B-$67B due to constrained production and demand in China. In a statement, the company noted that “Work is starting to resume around the country, but we are experiencing a slower return to normal conditions than we had anticipated.” This marks the second such disruption in the last two years, reviving questions about the company’s heavy reliance on China, and the stock is trading down -3% to $315 in pre-market trading as of writing.

Of course, a disappointing preannouncement from the world’s largest publicly-traded company is cause enough for a pullback in major US indices by itself, but traders are also extrapolating what Apple’s announcement may mean for other globally-integrated firms which could see similar interruptions in the weeks to come. As the chart below shows, Chinese smartphone production is projected to see its biggest decline in Q1 and Q2, before recovering in the latter half of the year: 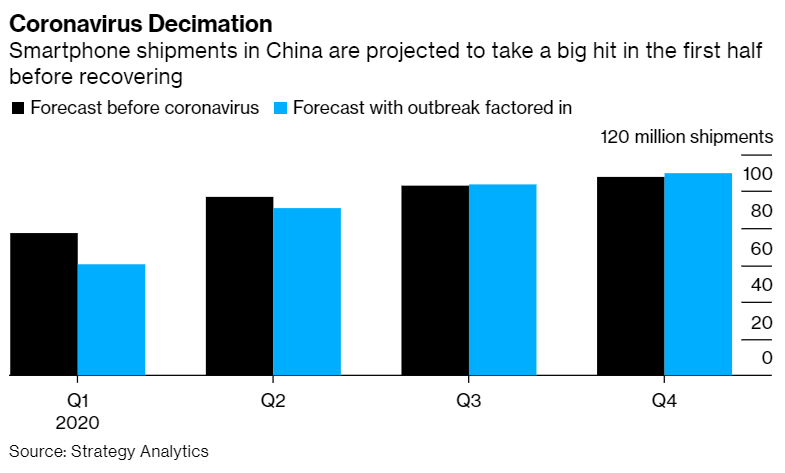 So far, the damage to broad indices has been relatively limited. Though the interruption to the global economy from coronavirus will be significant, traders are already looking ahead to the potential for more fiscal and monetary stimulus to offset the disruption. As of writing, the technology-heavy Nasdaq 100 e-mini futures are trading down just -0.6%.

Taking a step back, the contract is trading near the top of its 4-month bullish channel, with the RSI indicator showing a bearish divergence, so there is a case for a near-term pullback toward 9400. That said, the established bullish trend and potential for more stimulus may put a floor under any short-term dips. As long as the index remains above its 21-day EMA and bullish channel support in the 9300 range, the (bullish) trend remains the friend of traders!

Source: TradingView, GAIN Capital. Please note that this product may not be available to trade in all regions.