Sea Q4 preview: Where next for SE stock?

Sea will report fourth quarter and full year 2021 earnings before US markets open on Tuesday March 1.

Sea is on course to more than double revenue in 2021 as its gaming arm continues to grow and its ecommerce division reaps the rewards from the surge in online shopping since the start of the pandemic. The company continues to aggressively expand both segments of the business while fuelling newer initiatives, such as its move into financial services, even if these means incurring losses.

GAAP revenue is forecast to rise to $2.91 billion in the fourth quarter from $1.56 billion the year before. Sea is expected to report its third consecutive quarter of adjusted Ebitda losses of $185.2 million, which will have turned from the $48.7 million profit booked the year before.

The Digital Entertainment division is forecast to deliver 22% growth in adjusted Ebitda to $715.1 million. The unit, spearheaded by its online games publisher and developer Garena, is forecast to have ended 2021 with a record 101.6 million quarterly paying-users compared to the 93.2 million it had at the end of September. Total user numbers are expected to have hit 754 million by the end of December from 729 million three months earlier. Its Free Fire title has recently celebrated its fourth anniversary and the company continues to find ways of improving engagement, having recently launched Free Fire MAX that offers improved graphics.

Investors will be keen to hear commentary on India after Free Fire was banned in the country earlier this month amid a crackdown on Chinese apps. It was one of around hundreds of apps taken down over fears user data was being sent back to servers in China, a claim the Singaporean company has denied. The fact Tencent, one of the primary targets eyed by concerned foreign regulators around the world, is a major shareholder is not helping Sea’s case. India accounted for a small portion of gaming sales in 2021, but it is seen as a key growth market. Reuters reported yesterday that Singapore has raised concerns with India about the ban, demonstrating that the matter has escalated enough to bring diplomats into play.

The rise in earnings from gaming will be countered by widening adjusted Ebitda losses from its E-commerce division of $683.8 million. Although the unit, which homes the Shopee brand that is particularly popular in southeast Asia, remains loss-making, it generates over half of the company’s total revenue and represents the fastest-growing part of the business. Sea raised its guidance, for the unit on several occasions in 2021 following the strong growth delivered throughout the year. There are concerns the problems in India could knock-on to the Shopee app, which was only recently launched in the country.

Its newer Digital Financial Services, led by the seamoney brand that offers mobile wallets, is also set to remain in the red with a quarterly loss of $173.5 million forecast by analysts.

Sea has provided guidance on an annual basis in the past that has focused on individual growth targets for the Digital Entertainment and E-commerce divisions. Analysts currently believe the Digital Entertainment division will grow revenue by over 12% in 2022 (versus 92% in 2021) and that E-Commerce revenue will grow 64% (versus 140% in 2021). The company is expected to stay in the red this year, although report a narrower adjusted Ebitda loss of $94.7 million.

Sea, which has also seen cashflow improve in 2021, is thought to have around $11 billion in cash in the bank after raising $6.3 billion by selling American Depository Receipts (ADRs) and convertible debt last year, giving it the resources it needs to continue to aggressively invest in the business.

Where next for SE stock?

Sea shares soared to an all-time high of $373 last October after rallying from below $50 before the start of the pandemic as demand for online gaming and ecommerce boomed during lockdown. However, the stock has lost two-thirds of its value since then and today trade closer to $123 after slipping to its lowest level since July 2020 yesterday.

The RSI remains in bearish territory to suggest the current downtrend could continue, supported by the fact the 50-day sma trades below the 100-day sma (which in turn is below the 200-day sma). This is reinforced by rising volumes, with the average volume at time over the past 10 days of almost 11 million shares surpassing the 20-day average of 9.9 million and 100-day average at 6.4 million.

The fact shares swiftly recovered after hitting new lows yesterday suggests we could be approaching the floor for the stock, but if it continues to find lower ground then we could see it drift toward the $102 level of support seen through June and July 2020. However, shares have fallen to new lows while the RSI has climbed higher in bullish divergence to signal the current downtrend is running out of steam. The stock needs to first target $158 to close the gap created earlier this month before it can eye the 50-day sma at $175, in-line with the February high. 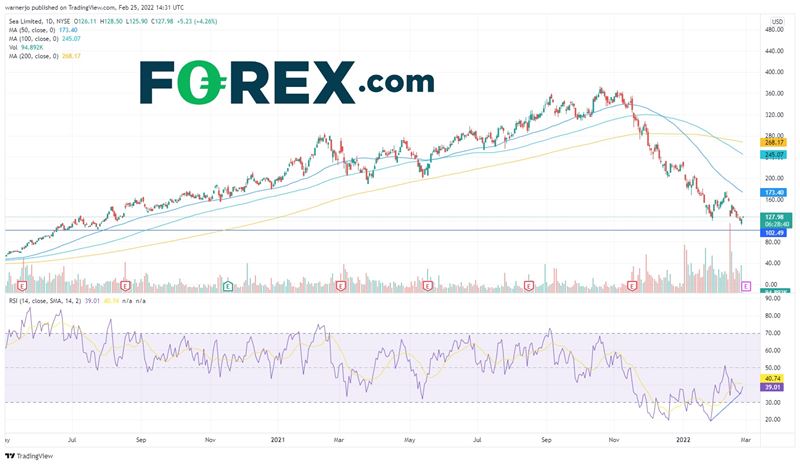 How to trade Sea stock

You can trade Sea shares with Forex.com in just four steps: