Last week saw stock indices, the US dollar, and earnings tumble as fears of recession and stagflation gripped the markets.

Will the volatility continue this week?  Last week saw stock indices, the US dollar, and earnings tumble as fears of recession and stagflation gripped the markets.  Continuing elevated inflation and a global growth slowdown were the main themes. This week, markets will get to hear what the RBNZ has to say, as members meet for New Zealand’s interest rate decision.  A 50bps hike is expected.  In addition, markets will get a better view of a possible slowdown when global PMIs are released.  In addition, last week Target and Walmart missed on earnings and they downgraded guidance, citing increasing costs.  This week Costco, Dollar General, Big Lots, and Best Buy will report.  Will these companies provide similar guidance?

The Reserve Bank of New Zealand meets on Wednesday this week to discuss interest rate policy.  Expectations are that the RBNZ will hike rates once again by 50bps from 1.5% to 2.0%.  At the last RBNZ meeting, the central bank surprised markets by hiking 50bps vs an expectation of only a 25bps hike.  Will the committee have more surprises for the market this week?  In addition, the board said that they expect inflation to peak in H1 2022 and were raising rates to head off rising inflation expectations.  Did they succeed? Perhaps! Inflation for Q1 was 6.9% YoY vs and expectation of 7.1% YoY and a Q4 reading of 5.9% YoY.  However, one has to wonder how much the shutdown in Shanghai has affected New Zealand and its supply chains.  Watch for wording from the RBNZ to see if members feel the shutdown led to a slowdown during Q2.

Last week, the consumer was in focus as a number of countries released April Retails Sales data and big retailer companies released earnings for Q1.  The April retail sales data wasn’t so bad, however companies such as Walmart and Target missed estimates and guided lower.  Walmart reported adjusted earnings per share of $1.30 vs expectations of $1.48.  Walmart’s CEO blamed unexpected US inflation levels, which increased costs and lowered margins, for the poor results.    Meanwhile, Target reported earnings of just $2.19 vs an estimate of $3.00.  This week brings results from more retail companies, including a few discount retailers such as Costco, Big Lots, and Dollar General.  Did high inflation drive up their operating costs as well?  With slim margins already, there companies can’t afford to take much of a hit to their bottom lines.  Other companies reporting earnings this week (including pandemic favorite Zoom) are as follows:

On Tuesday, many countries will release their respective flash Manufacturing and Services PMIs for May.  Did factory and business activity slow during the month?  Last week, the US released Manufacturing data for the US from New York and Philadelphia.  The results were terrible.  This week, markets will get to see results from less often noticed Fed offices in Richmond and Kansas.  Will results be just as bad?  In addition, Retail sales data isn’t done yet!  This week we’ll get April results from Australia and Q1 results from New Zealand.  Also, on Wednesday, the FOMC will release minutes from its last meeting.  However, with so many Fed officials touting 50bps rate hikes at the next meeting (including Powell), these minutes may prove to be stale.  Other important economic data due out this week is as follows: 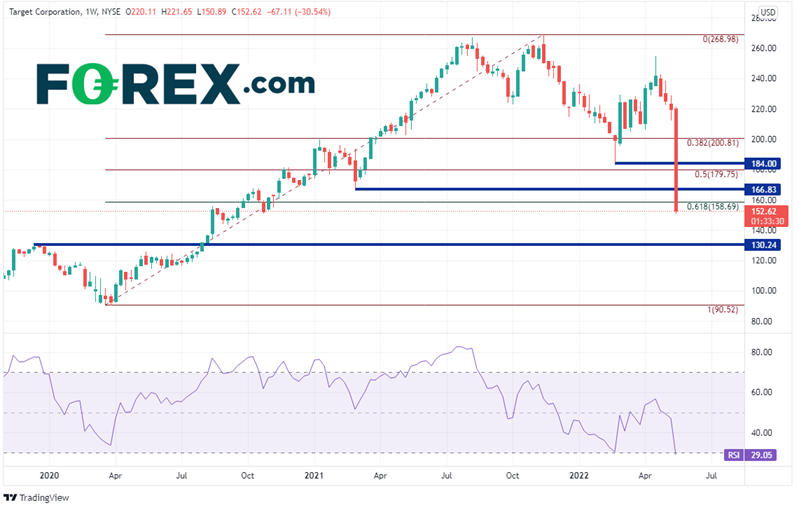 After disappointing earnings from Target last week, the stock puked and is down roughly 30% this week alone.  Not only did the stock crash through the 38.2% Fibonacci retracement level from the pandemic lows of March 2020 to the November 2021 highs, but it also fell through the 50% retracement level and the 61.8% Fibonacci retracement levels below 158.69, as well.  The next level of support for the stock isn’t until horizontal support at 130.24.  If price can break below there, it can fall all the way to the March 2020 lows at 90.52!  As one may have guessed, the RSI is in oversold territory.  This would typically indicate the stock may be ready for a bounce.  However, it would be tough to rely on this one indicator as the stock is in a freefall.  But if TGT does manage to bounce, horizontal resistance on the weekly timeframe sits at 166.83 and again at 184.00.

The RBNZ meeting on Wednesday will be the central bank highlight of the week.  Will it raise 50bps as many expect?  In addition, May manufacturing and services data will be carefully watched for signs of a slowdown.  And don’t forget about earnings!  With TGT and WMT missing badly last week, keep an eye on discount retailers such as BIG and DG, which will be reporting this week!